Insurgency: Sandstorm is a Cinematic Bloodbath 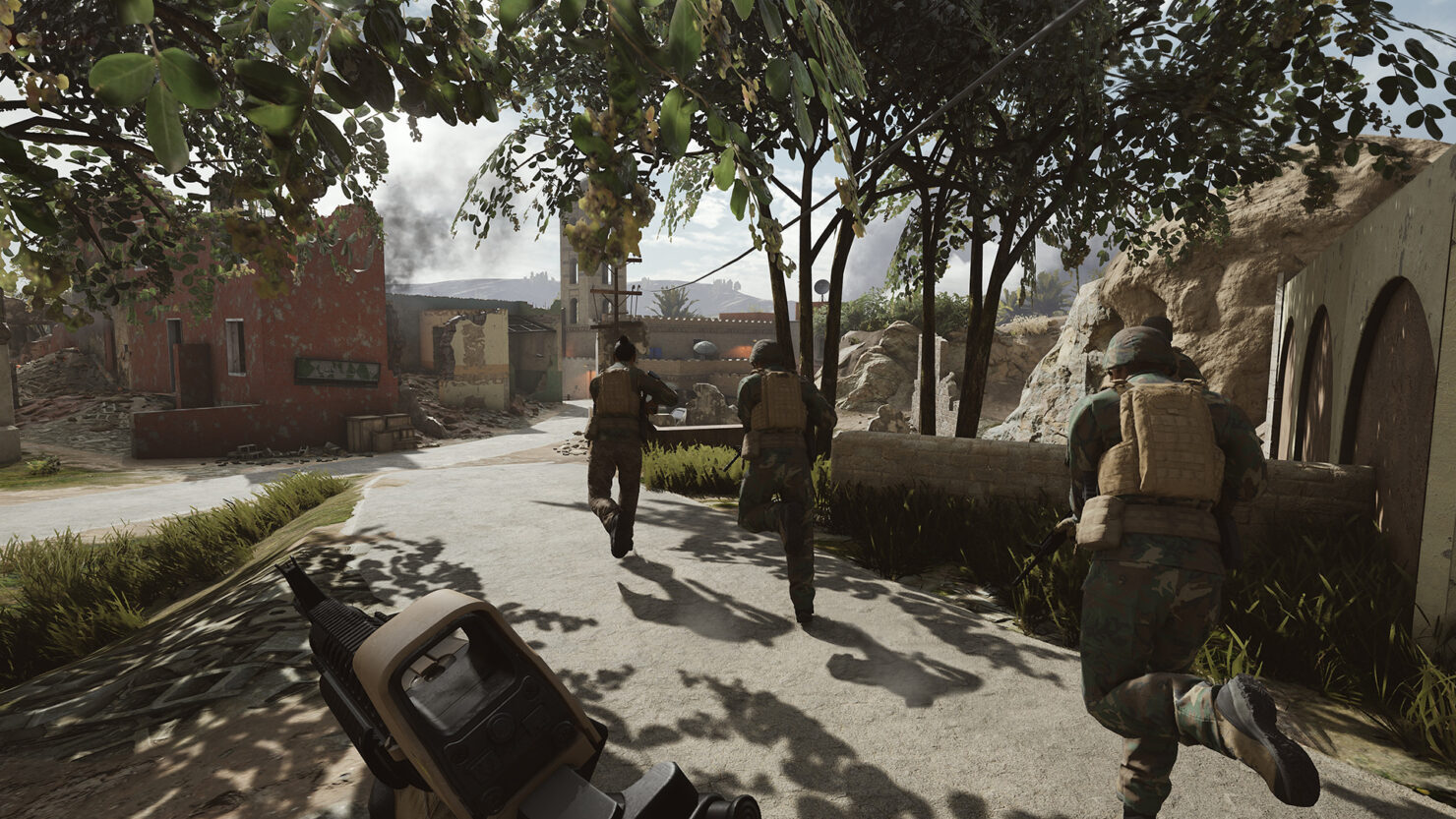 Insurgency: Sandstorm is a cinematic bloodbath. Like the grittiest of war films and game trailers, every glimpse away from the safety of the wall you’re hiding behind is a snapshot of the horror and excitement of war. It's not the traditional action film, with glorious explosions and clear, centered shots of all the action, but frantic and disjointed. Insurgency: Sandstorm is visceral but surprisingly understated at the same time.

Death comes quickly in Insurgency with long felt consequences for the player and the team. But despite that, death looks mundane. Idle bullets pierce heads and bodies fall limp; they don’t comically ragdoll but collapse weakly. In my time with the beta build of the game I witnessed airstrikes decimate teammates, courageous charging soldiers knocked back by the spray of bullets and grenades shred through entire rooms. It was the kind of action that evoked a guttural fear inside me but never put me off entirely.

Unfortunately, these moments that perhaps best encapsulate the tone Insurgency: Sandstorm was striking for don’t feel as satisfying when you’re caught in the crosshairs. The developers have chosen to forsake deathcams, so often you'll have no idea who or what killed you; on top of that, respawns can feel painfully slow. It’s a choice that forces players to be mindful of their surroundings and not take risks, but it also makes inexperience all the more deadly. 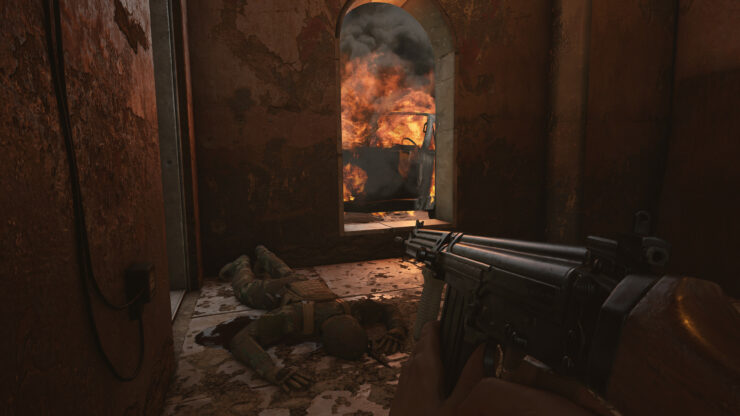 Nonetheless, the action firmly places you in the heart of your favorite bleak war film. Frantically swiveling the camera, looking for friends and opportunities means spotting a dozen microstories that merge to create the dense battlefield you find yourself in.

I had the chance to play the three different modes of Insurgency during the beta. The first mode was coop, where we played together trying to take objectives from waves of computer-controlled bots. These bots don’t mess around though, and the action often descended into chaos as our team was separated and picked off. The second mode was essentially the same but with human-controlled enemies, where teams swapped sides between attackers and defenders. Naturally, this was much more difficult, especially against the skilled veteran players. This is where I finally understood what makes Insurgency stand out against a battalion of hardcore indie shooters.

If you read my preview from February, you’ll know that there are a few little mechanics that change the influence of the game. Observers and Commanders are the only ones that can call in support, and only if they’re both alive and in range. On top of that, reloading cycles out ammo clips which you will later return to.

But it's the mechanics of respawning that feel unique. In the versus mode, rather than using respawn tickets like in Battlefield, Insurgency resurrects players in waves. There are no revives, or last stands of health stations either, so removing a player from the battle can quickly change the dynamic of the fight. But after a set amount of time, the entirety of the fallen will come surging back into the fray, forcing teams to play aggressively when that window opens. And because of this setup, an entire wave token can be used by a single player respawning, if nobody was foolish enough to die. While in coop, the team can only respawn once an objective is secured.

Insurgency doubles down on the team dynamic and reliance on awareness by making death so punishing for the whole team. It is a dramatic affair, with the kind of emergent moments you would be able to talk about for days after playing. I still have distinct memories of my team stacking up before breaching into a building, only to have the first through the door immediately killed, and a panicked teammate in the back of the squad launch his RPG for support. I also remember seeing my commander executed by a player with a pistol. These are moments almost impossible to explain because the fear and the excitement and horror must be experienced first hand. 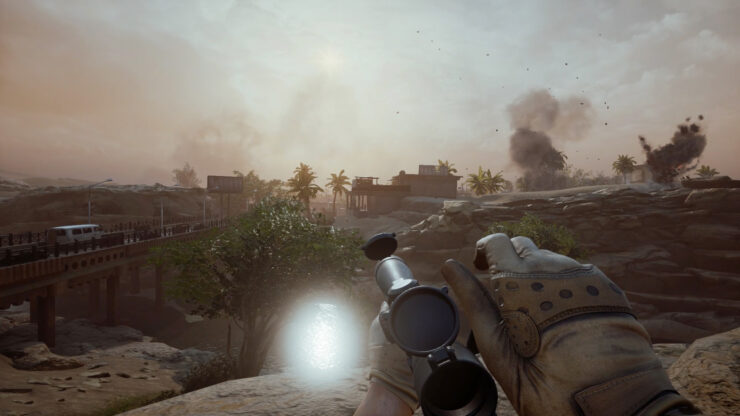 The final game mode was a fan requested one: a smaller scale, competitive edition that pits teams of five against each other. Battling for three objectives, the small teams can only respawn once after one objective is captured, making death just as brutal.

While there are harder games, Insurgency: Sandstorm doesn’t feel like a game that will sit well with casual players. The minutes of downtime between respawns and short lives means less patient players might bounce off this game rather quickly. And without much a HUD, players don’t even receive the instant gratification of confirmed kills. Having said that, the thrill of Insurgency: Sandstorm isn’t necessarily for the kills, it’s the battle itself. Players who can enjoy themselves when everything feels like it's going wrong can have a lot of fun battling it out on the front line.

Ahead of the preview, I got to have an informal chat with some of the developers. One feature they were quick to show off was the customization.

While not the first military shooter to allow some degree of character customization, Insurgency: Sandstorm has an arsenal of options for creating unique players. I saw dozens of individual options, including gender, and the ability to change the appearance of nearly everything from the operator's gloves to the facial hair. Each item will be bought with an in-game currency that’s earned through experience.

Despite the number of options, the developers have had to work with some limitations. Sandstorm has a very minimal HUD design and as a military shooter with a focus on game realism and unforgiving combat, players will have to have some other way to immediately identify allies from opponents. To assist players, and reduce accidental friendly fire, the developers have used distinct character silhouettes and color schemes to help players identify one another.

The Security team will always have their face exposed, for example, with an assortment of hats and helmets that look distinctly military. Insurgents, on the other hand, will have covered faces and, from the options I’ve seen, a softer looking silhouette in comparison the rigid lines of the characters in the security team. On top of that, insurgents will be donned in a mishmash of bright colors, while the security team will be wearing the more traditional, neutral camouflages you might expect. Hopefully, all of this will make it easier to identify friend from foe, with any and all friendly fire a result of a deliberate act of mutiny.

Insurgency: Sandstorm is now set to release September 18th on PC, with a console launch due next year. If you pre-order the game on Steam, you can access the PC beta right now.