In an attempt to take the lead in providing the best video game experience to its players, Microsoft is working on enlarging its library of exclusive video game titles. Insomniac Games, a video game development studio that was once fiercely loyal to Sony, is now developing the next big Xbox One-exclusive open world third-person shooter title known as Sunset Overdrive. According to the developer, Sunset Overdrive runs at native 900p resolution and 30 frames per second, and is the biggest game ever developed by the studio. 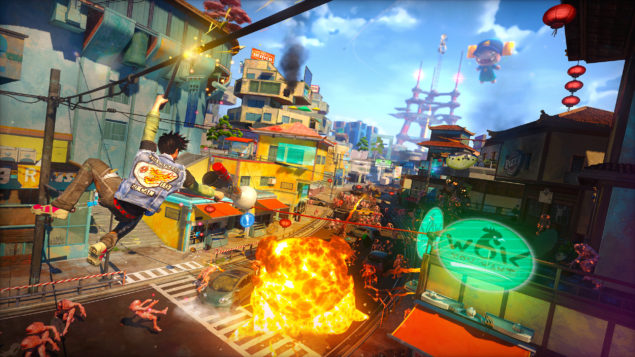 Insomniac Games, an America-based video game developer that is cherished for its PlayStation-exclusive Ratchet & Clank and Resistance video game series, is doubling down on what it is best known for with the upcoming open world third-person shooter video game known as Sunset Overdrive. This video game is exclusive to Microsoft's latest Xbox One console. The developer, after learning from its previous missteps that took away from Fuse's charm, is putting all its efforts into creating a perfect world for Xbox One players that is filled with unlimited fun, crankiness and color.

Officially confirmed as the biggest video game ever created by Insomniac Games, Sunset Overdrive is an exciting game that embraces the visual capabilities of the latest console. Set in a rapidly moving world that is awash with the glow and hue of the next-gen game development technologies, the upcoming game is apparently a perfect mix of shooting and fighting and stunt-rousing mechanics that make its gameplay experience count among the most immersive ones.

While talking about the game with IGN at today's EGX 2014 convention, studio president Ted Price confirmed that the Xbox One will handle all this Sunset Overdrive fun at native 900p resolution and 30 frames per second. According to Ted, 900p and 30fps native is the right choice, considering the nature of the game that puts up quite a lot on the screen at the same time. He said:

“We’re running at 900p and 30 fps native. This is a game with a lot on the screen and we made the choice to be at 900p because we wanted to push the level of detail, action, the size of the city and the views you can experience as move around. What’s great about Sunset Overdrive is if you can see it, you can go there.”

Price also stated that the Xbox One June SDK update, which came after Microsoft removed the Kinect sensor from the standard Xbox One bundle, provided a slight boost in the console's CPU power for developers. Taking advantage of the CPU boost, Insomniac Games improved Sunset Overdrive's physics, navigation and AI.

“What happened for developers not using the Kinect is that there was a slight boost in CPU power that we got to take advantage of. This game really does push the limits when it comes to the number of enemies on screen, so it was useful for us to have more CPU juice to help with physics, navigation and AI."

Sunset Overdrive is set to launch on October 28 exclusively for Xbox One. If you haven't bought Microsoft's latest console yet, and you plan to do so, don't miss out on the special-edition Xbox One bundle that includes the game and a white system at a special price of only $399.