Nvidia has always had some pretty bad-luck in the Industry where the Tegra was concerned and now it seems that there is more to pile up on old reserves. Apple's newly launched 20nm SoC, the A8X, has a GPU that beats the 192 Kepler Core Tegra K1 if initial benchmarks are to be believed. The Tegra Variant used is the 4+1 variant (32 bit) not the Denver variant, though that shouldn't make that much of a difference.

The benchmarks appeared on GFXBench.com and you can easily compare the A8X (Apple iPad Air 2) with the Nvidia Shield Tablet for an easy side by side comparison. As you can see below, the A8X's GPU wins the offscreen rounds every time, while the Tegra K1 nets more frames onscreen. This is because of the much higher resolution favored by the Apple product as opposed to only 1080p on the shield tablet. Here are the benchmarks as compiled by GSMArena.com: 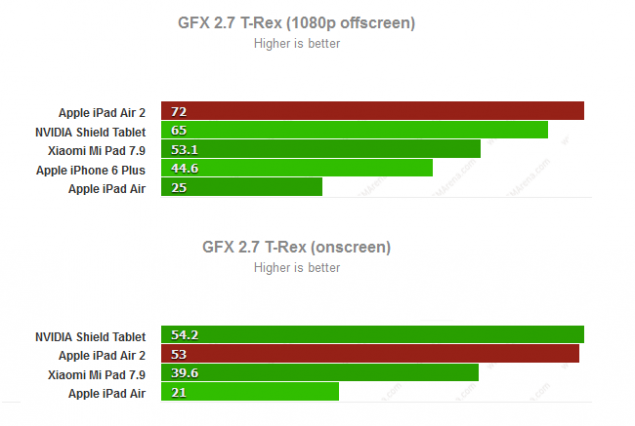 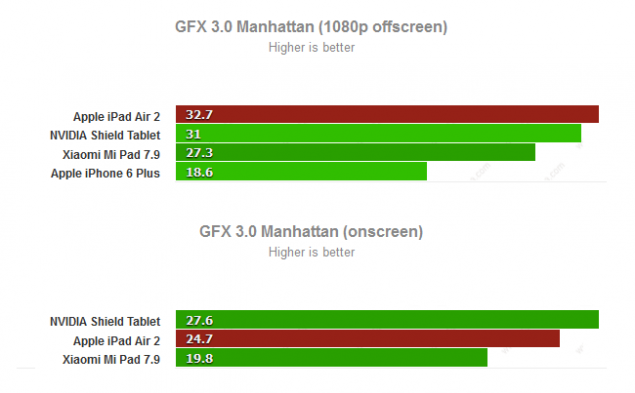 As you can clearly see, the Tegra K1 is 1.7 frames behind the A8X on the Manhattan offscreen and 7 frames behind  on the T-Rex offscreen. Apple's A8X is a 20nm SoC while Tegra K1 is a 28nm chip, and though the difference is not night and day, the power consumption levels should be interesting to observe. The Tegra K1 is slightly faster when dealing with onscreen benches.  The K1's 4+1 variant is slightly weak on th CPU side and has a narrow 3-issue super scalar. However, since we are comparing the GPUs, if the benchmarks are coded correctly, the availability of significantly powerful CPU cores shouldn't make that much of a difference. Its still 192 Kepler Cores pit against the A8X's GPU, which is probably of PowerVR design.

Not much is known about the A8X apart from a few hardware specs such as its 3 billion worth of transistors, out of order execution and 6-way super scalar design. And most of the specs that we know, only make a difference in the compute sector in which the Nexus 9's cores are approximately of equal power to those in the A8X (if you compare core-to-core). Mobile GPUs are becoming ridiculously fast, and if we really want to see them properly utilized then the first thing we need is serious game development. Think full desktop rendering and proper games. It is only when that happens that this latent potential of mobile platforms will be properly utilized.