IDC Reports 0.1% Market Share For Windows Phone, Android Grows To 85% in the Q1

IDC (Interactive Data Corporation) report for the first quarter of this year is out, and it looks like the race between smartphone OS has just two contenders left - iOS and Android. Most of the other competing OSes like Windows Mobile and Tizen are a part of the crumbling "Others" category that has a dicey future. IDC has also placed Windows Phone shipments for the first quarter at a scant 0.1%.

As expected, Android rules the market with a whopping 85% of market share while iOS claims 14.7% share. That's how the cycle runs, Q3 is usually a weak quarter for iOS, and then a new iPhone debuts in the Q4 that adds several points to the iOS share. To recall, it was in the Q4 last year when Samsung faced slump due to the Note7 fiasco, and Apple briefly dethroned Samsung as the leading smartphone manufacturer in the world. However, Samsung claimed its glory and is back on the number one spot despite the flat quarter YoY.

Samsung got the much-needed push from its discount offers for the Galaxy S7 and S7 edge while the latest Galaxy S8 duo also marked high demand. Not just the flagships, Samsung is also doing pretty well in the low-end segment with its A and J series that "drove significant volumes." in both developed and developing markets. 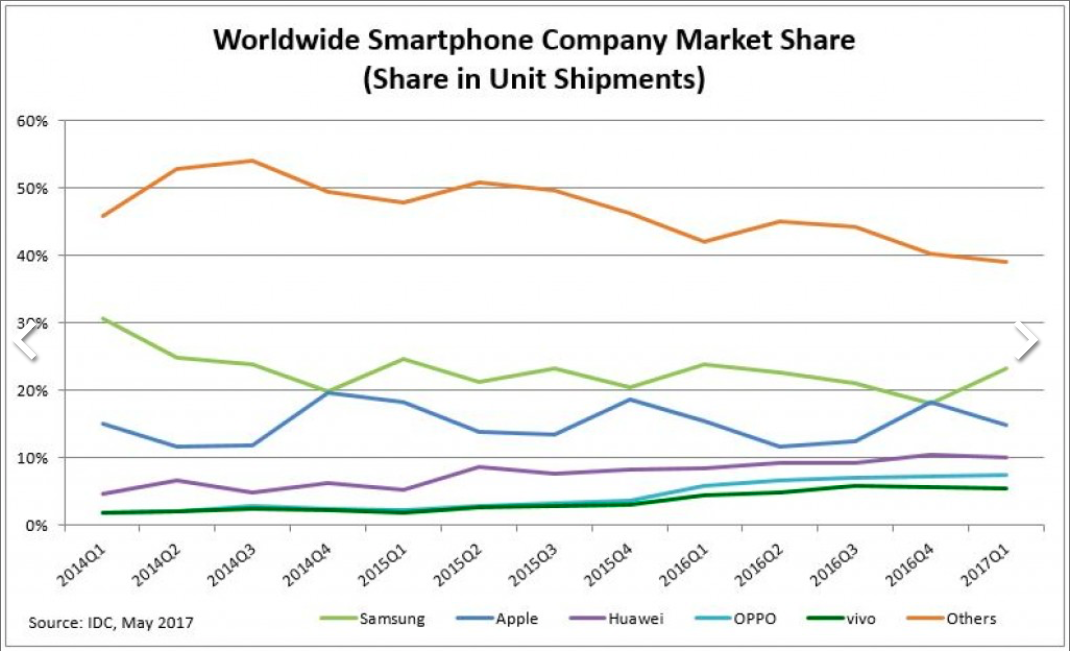 Stronger numbers for Apple in the Q4, thanks to the iPhone 8

Meanwhile, Apple witnessed a small slump YoY; it fell from 51.2 million shipments to 50.7 million. We can expect the numbers to grow in the Q4 when the iPhone 8 gets launched. IDA itself predicts the next year as a “very strong” year for Apple. Other than the two biggies, Huawei is also catching up on the game, it witnessed an increase in its shipments in the Q1 2017 to 34.6 million units. Huawei's product profile is quite similar to Samsung - flagships (Huawei P10 and Huawei Mate 9) and Low/Mid-range (Huawei Y series and Honor range).

Oppo is also witnessing growth with Oppo R9 as its best seller. Interestingly, Oppo is faring better in the regions outside China. The company is quite popular in the rest of Asia and then the Middle East and Africa. One of the contributing factors to Oppo's growth is its accurate after-sale service. On the same grounds, Vivo is also catching the pace, thanks to its growing presence in India.

In the report, IDC has also stated that the average selling price has been on a decline, and in the Q1 2017, it is $220. The firm predicts that this price could drop to $198 in the year 2021 when 1.5 billion Android phones are anticipated to ship out.