Looks like the HTC One M8 simply can not stay out of the media spotlight these days. HTC is expected to unveil the device at this year's MWC due to be held in Barcelona, Spain. A couple of days back, the French site NWE posted a couple of pictures of the HTC One M9 or the HTC Hima s its expected to be dubbed by the Taiwanese manufacturer. The photos were taken down soon after by the website at their source's request. Well, NWE's Steve has posted one more image of the HTC One M9 today, and this time the device is shown next to the One M8. 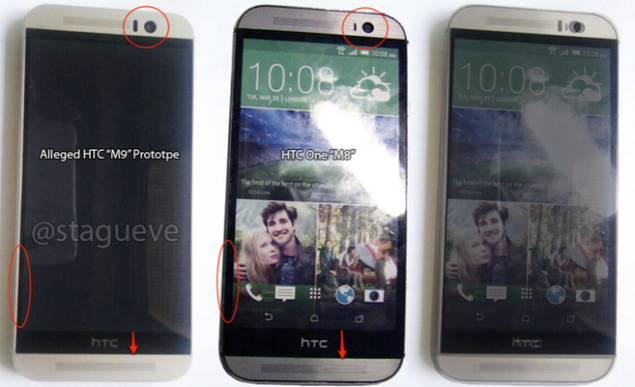 The HTC One M9 has been placed next to the already existing One M8. Minimal differences can be spotted between the two devices in the image above. One of these is the apparent reduction in bezel size on HTC's upcoming flagship. the bottom bezel consisting of the HTC logo also seems to be more flattened out and have a more modernistic look in the HTC One M9.

Screen size also seems to have been largely unchanged on the HTC One M9 as both the device's end up having similar looking screen sizes. Side bezels on the HTC One M9 also appeared to have been thinned out by the manufacturer. In addition, the front flash also seems to have been increased in size. Apart from these changes highlighted above, very little seems to have changed on the One M9. Today's image makes it the second alleged HTC One M8 image that shows little creativity from folks over at Taiwan. Doesn't sound that much interesting if you ask us. Lets see what changes HTC makes in the media department on its smartphone.