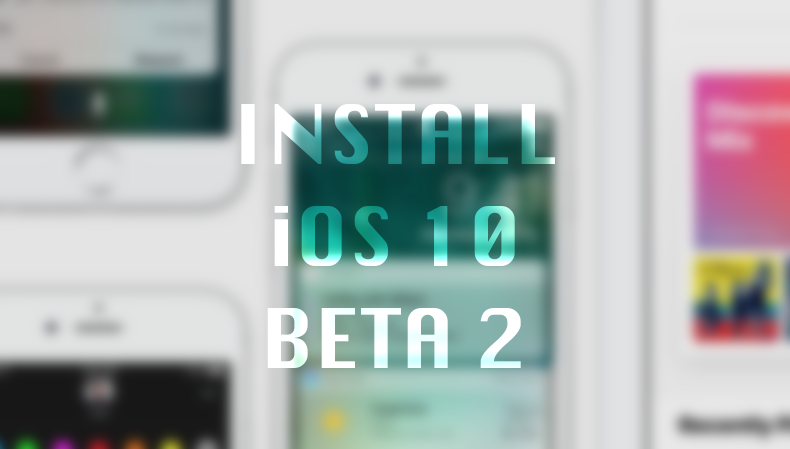 Here's how you can download, install iOS 10 beta 2 on your iPhone, iPad, iPod touch devices. There are several ways to achieve this. We'll walk you through each and every single one.

Installing iOS 10 Beta 2 Is Easy; We'll Walk You Through All Available Routes

iOS 10 beta 2 was released a while back and here are all the routes you can take to install it on your iPhone, iPad, iPod touch.

This is the most preferred route you should take as it ensures maximum performance and battery life. Simply take a complete backup of everything and follow the guide posted here: Clean Install iOS 10 Beta On iPhone, iPad The Right Way – How To.

This route is extremely easy and we've walked you through it already in the beta 2 download post.

You can even install iOS 10 beta 2 from scratch as an over the air update on top of iOS 9. Follow our guide posted here for instructions: Install iOS 10 Beta OTA On iPhone, iPad Without Downloading Entire IPSW.

We wouldn't recommend taking this route, but if you're feeling brave enough then simply follow our guide posted here: Install iOS 10 Beta On Your iPhone Without A Developer Account – How to.

Get yourself enrolled in the Apple Developer Program instead. It will set you back $99 annually but in return you get access to every pre-release build Apple will ever push out in the year to come.

If you've come across Error 14 while restoring iOS 10 beta using iTunes, then head over to the following guide: How to Fix Error 14 When Updating to iOS 10 Beta.

A Warning For New Users

iOS 10 is beta software therefore don't expect it to serve as a daily driver for you. However, once four or five beta builds are out in the wild, you may go forward in installing the software on your iPhone, iPad, iPod touch.

Using beta software on a daily basis has all sorts of 'bad' written on it and we wouldn't recommend having it onboard until or unless you have special reason for doing so. For instance, you're a developer. It makes more sense to have iOS 10 beta installed on your iPhone or iPad then. If you're not, then we suggest looking somewhere else for the time being.