Honor 7X Arrives In The US With 16:9 Display, Dual Camera, All-Screen Design For Just $199 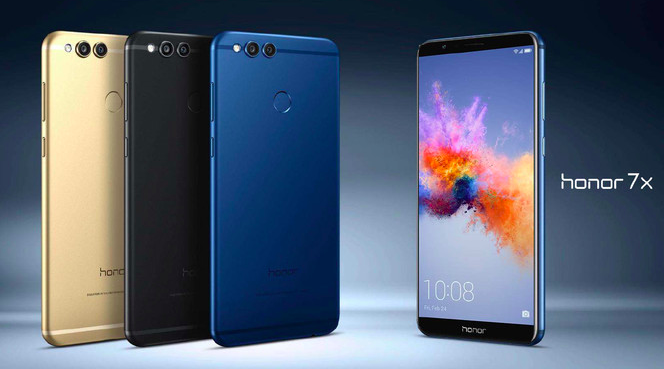 Huawei took the veil off its budget flagship, the Honor 7X. The mid-range phone was launched in China back in October and today, Huawei has made the Honor 7X official in the US. It is priced at just $199 and packs in more action that one could expect in such price range. Let's take a look at its specifications.

The Honor 7X comes with the Honor 8 Pro like all-screen design, though not bezel-less, Huawei claims that the 82.9% screen-to-body ratio on the 7X is the highest in the $199 price segment. The Honor 7X features a 5.93-inch Full HD display with 18:9 aspect ration and a pixel density of 407ppi. Just like the recent Honor smartphones, this one also houses the fingerprint sensor on the aluminium back panel.

Regarding performance, the Honor 7X packs in Huawei's mid-range Kirin 659 octa-core SoC that houses eight ARM Cortex-A53 cores. For the US market, the 3GB RAM/32GB storage variant of the 7X is available with a microSD card slot onboard. A 3,340mAh battery completes the package. On the software front, the device runs Huawei's EMUI 5.1 (based on Android Nougat), and the company claims that the 7X will soon get the Oreo-based EMUI 8.

The Honor 7X features a dual-lens camera composition with a 16MP main sensor and 2MP assistive sensor. The main sensor is responsible for capturing the picture while the assistive sensor helps with depth perception. The combination of two lenses enables depth-of-field/bokeh effects along with other nifty effects. Honor claims that the enhanced Phase Detection Autofocus (PDAF) on the 7X increases shutter speeds by 40%. For selfies, there is an 8MP camera.

Let's get down to the pricing and availability for the Honor 7X. The pre-orders for the phone begin today and will end on December 14. It will be available in two colour variants - Aurora Blue and Midnight Black for $199. For Europe, the device will be priced at €299 as it features higher RAM and storage - 4GB RAM/64GB storage - with one additional colour option, i.e. Platinum Gold.

Specs at a glance:

We have received the review unit of the Honor 7X and will be posting our first impressions soon. Stay tuned with us!