Homefront: The Revolution Preview – Interesting & Troubling at the Same Time

There’s a camera on the ground, it looks like it’s been dropped. Instead of the clean framed box we are accustomed in video games, we see the world at an odd angle. And standing on this diagonally floor, is myself. I, a young steely eyed fighter, along with my comrades hurdle together awkwardly. Our movements are a little sketchy at best, possibly because we’re being controlled from this unconventional angle, but more likely because we’re so determined to secure freedom from the evil oppressors.

When the game finally starts, our resistance cell immediately dashes across the rubble of an All American neighborhood to push our foes back. We’re still not moving correctly. There’s a really strange glide within the vision, like your eyes are rolling on ice, and it takes a second to kick off too. You have to anticipate where you’ll want to look a few seconds ahead of time. Obviously this is because we’re imagining all the freedom we’ll be shooting out at the invaders, but it’s really quite hard to compensate for. 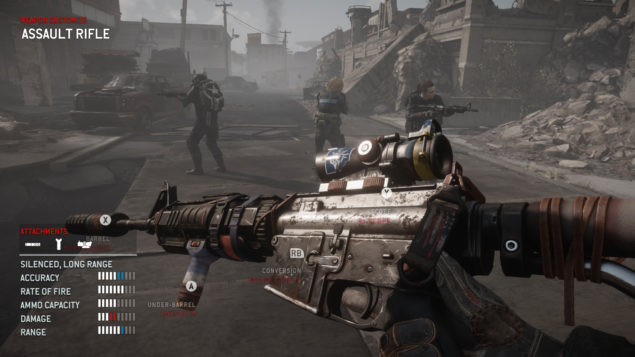 Regardless, we’re pressing on and engaging the enemy across a street, which is a lot more difficult as my aim keeps sliding over their evil, freedom hating bodies. I don’t know if my comrades also succumbing to this mind altering lag, but we eventually dispatch those enemies while a lady tells us what’s next. More running and gunning. The destruction of the city has caused the walls to crumble and expose the rooms out to the vacant, body laden streets. We can use this to our advantage and the city has this nice vertical slice we can attack from.

Eventually we commandeer vehicles to launch the next part of our attack, which gives a sense of the scale of destruction this occupation has caused. The enemy are everywhere and have spread miles out, and we must meet them, like they met us, on their land. We rocket to overpower them, sliding vision and all, but as the fighting intensifies, our numbers wither. Until it is just me, bravely advancing to the rear as I’m gunned down by cowardly and underhanded opponents.

This repeats a few more times, the vicious occupiers always seem to overcome the underdog force of rag tag soldiers trying to end their evil schemes. Perhaps it’s because of the aiming system that floats from one side of the map to the other, perhaps it’s an attempt at realism. Either way, the beta for Homefront: The Revolution struggles to hold your attention for long.

The lag, that little gliding delay in the motion of the game is something that can and will hopefully be fixed in the full release of the game, but its constant, insistent appearance in the beta does make it harder to appreciate the rest of the product.

It’s interesting to recall that the first in the series was famed for having a spectacular competitive multiplayer dragged down by an abysmal single player campaign. You would have thought the smart thing to do was to focus on what made the first game positive, but instead you have cooperative multiplayer missions with no competitive aspects at all, which disappointed a consistent part of the community. It’s a brave move, but it’s also smart to try and disengage with popular rivals like Call of Duty, Battlefield and Rainbow Six as well. Whether or not Homefront The Revolution can pull it off is a different matter entirely.

There isn’t much to say about the story of Homefront: The Revolution, as the co-op mission available in the beta had nothing but a voice in your ear telling you do to various things. There are smaller objectives that lead to a larger mission task. What is nice is that these objectives, like hacking a console, move around the map a little bit with each attempt. This means that no standard strategy will work, and you will have to adapt, even if just marginally. 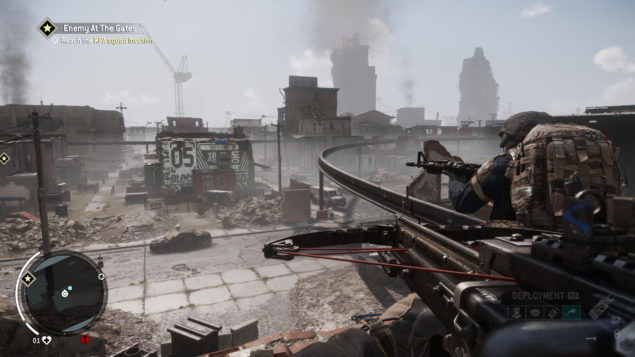 The setting is a little familiar too, although it’s hard to feel anything about it. You’ll clamber over piles of burnt bricks and run through blown out buildings. So many war games feature this shell of a city, where there’s this sort of empty sense of horror. The game obviously expects to you to feel something for the ruins of Philadelphia scattered around your feet, but I found it all just hollow. I’m sure there will be more to tug on the heartstrings in the actual campaign, but for now the map just feels like a set of hallways and open spaces lacking any emotional depth.

The gunplay is fine, when you can actually aim over the target. The weapons are weighty and pack a punch, while you move quickly enough that darting between cover is fluid and nice. The vertically of the levels is probably the most engaging part of the action. You’ll have to clear the higher levels and rooftops of the buildings, not just the streets below.

The beta wasn’t all the excitement that a lot of us, developers included, were hoping for, but it was still interesting. They have built a world that with a little more depth will be enjoyable to explore. Once the lag issue has been amended the gunplay will go from good to exciting and with a little more context, the missions might not feel quite so led by the nose.

Of course, they're going to have to improve both frame rate and graphics quality of Homefront: The Revolution before launch, but the folks at Dambuster Studios already said this was an old build. Let's hope they are right.

The game is scheduled to launch on May 17 (North America) & May 20 (Europe) for PC, PlayStation 4 and Xbox One.