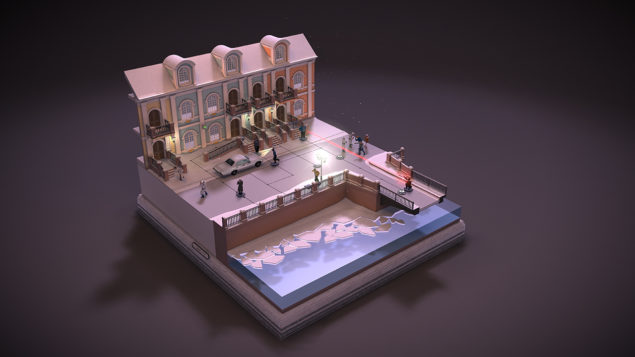 Hitman GO is the mobile version of a rapidly more console-accessible franchise that originated as a hardcore title on PC. Just to make the cycle complete, it's getting a port back to PlayStation devices and PC. And why not?

Granted, the simple touch game might not be the most difficult of experiences, but there's no doubt that it was very popular, and the addition of a platinum trophy on PlayStation 4 and Vita will make it a very attractive title to revisit.

It helps that it's a cross-buy title, meaning a single purchase will get you both the home and portable versions of the title.

if you're not part of the PlayStation Nation - or at least the newer parts of it - it's also available on PC via Steam.

But this isn't just the regular old Hitman Go that you've been playing on your mobile device for what seems like decades - the one that you conveniently got as part of a Humble Bundle months and months ago. No, this is the Definitive Edition.

Why is it the Definitive Edition? Because it sounds significantly different from the base game to attract double buyers and, as far as we can tell from the press release, not much else. It's been optimized for console and PC with updated controls, various kinds of achievements and cross-save capability on PlayStation. But surely those are all things you'd expect from a release on a new platform, not least the promise of updated controls. Playing it on PS4 without would have been rather difficult otherwise.

Oh, and in-app purchases have been removed. Opera, Airport and St. Petersburg boxes have all been included from the start.

But nobody gets something for nothing and so there's a new price. Hitman Go: Definitive Edition is available now for $7.99 or local equivalent, but there will be a 20 per cent discount for the first week of release.