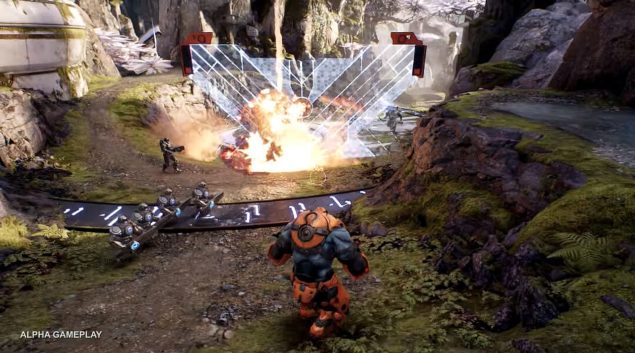 There was a time, not all that long ago, when the entire MOBA genre was made up of a single game, played only by the greatest of digital masochists. These days every major studio has their own take on this strategy staple, each one promising new and supposedly exciting things within the original, rather strict framework. Paragon is Epic Games' version and today we got to take a new glimpse at some gameplay.

The new gameplay footage features characters  Sparrow and Gideon as they rush the enemy core.  Dekker, Steel and Grux try to defend it.

The hook for this latest MOBA is that it's a third person action game, putting you directly into the action. That means at least some of the skills are going to rely on your being in complete control of your character, supposedly adding another layer onto an already skilled gameplay style.

Unlike in-game shops that are usually an important part of character development in MOBA titles, Paragon instead uses a card system. Pick your deck before you start a match, and go from there.

This led to worry this week that the best players will be those happy to part with their cash, but Epic but those worries to rest pretty quickly. The company told Eurogamer that card packs will not be available for cash.

Paragon is coming to PC and PlayStation 4 later this year, with paid Early Access in Spring 2016 and Open Beta in Summer 2016.