Hawaii Rocked by Ballistic Missile Alert, Later Found to Be a False Alarm 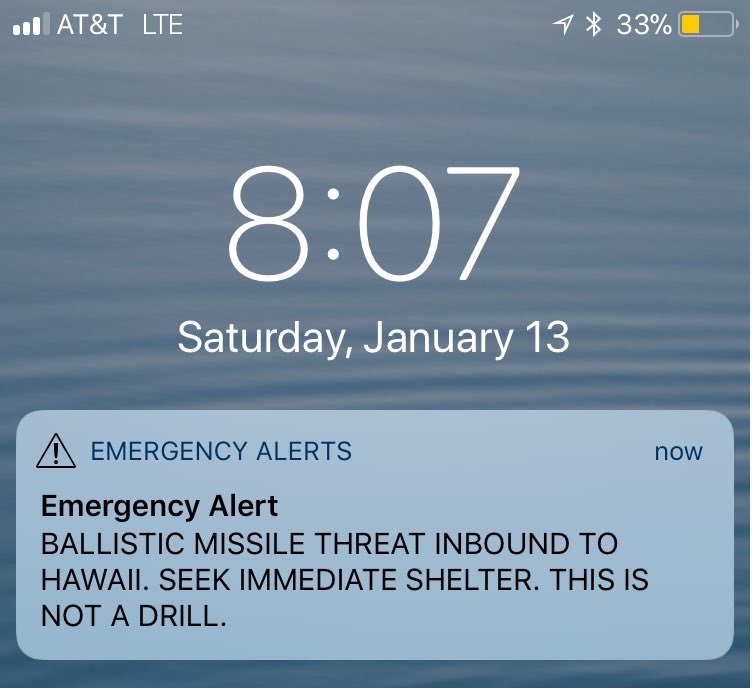 Residents of the state of Hawaii received a rather shocking notification on their mobile devices today morning: a push notification that read " BALLISTIC MISSILE THREAT INBOUND TO HAWAII. SEEK IMMEDIATE SHELTER. THIS IS NOT A DRILL.”. A screenshot of the alert first appeared on Twitter, with several Hawaii residents confirming that they too had received it. The warning was broadcasted on television as well.

Needless to say, it caused mass panic among the residents, who took to Twitter for answers. It was confirmed by NORAD, US Pacific Command, Hawaii Emergency Managment agency and others as a false flag.

U.S. Pacific Command has detected no ballistic missile threat to Hawaii. Earlier message was sent in error. State of Hawaii will send out a correction message as soon possible. pic.twitter.com/hqidbV0BWn

After 38 minutes of wait, another alert was sent stating that the island state is in no immediate threat and that the message was sent in error. Officials later stated that the alert sent to people in Hawaii that said a “ballistic missile threat inbound to Hawaii ... this is not a drill” was actually a drill.

Officials stated that they have now launched a full-scale investigation into the incident and will take stringent action against the person/persons responsible for the oversight. We're glad that there is no actual threat to the island state and hope that the ones responsible will be put to the task.