If you own an iOS device, yet you are unfamiliar with its internals, we have just the tweak to guide you. HardwareSpecs is a newly released jailbreak tweak which has a simple purpose. The tweak adds a new panel inside your stock iOS Settings app. The new panel will portray all your device specifications such as Model Number, Type, product, Processor, Platform, Architecture and many more.

The HardwareSpecs is an intriguing jailbreak tweak that shows you internal information about your device. Previously, iOS platform does not contain any panel responsible to display internal specifications. Henceforth, it is a good way to put an end to your suspense.

So let's dive in to see some more details on the new jailbreak tweak and how can you make use of it.

The HardwareSpecs jailbreak tweak makes an entry into the tweaks list with version 0.01 by the author m156@nrkvv. Once you download and install the tweak, navigate to the stock Settings app on your iOS device. After Settings, go to General where you will see a new panel by the name of 'Hardware Specs' between the Software Update and About section. Tapping on Hardware Specs will unveil the internal details about your device which have been nonexistent previously. 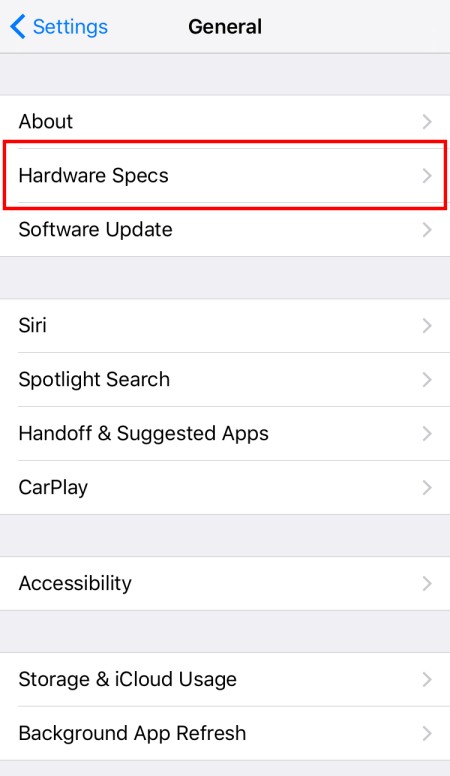 As can be seen in the screenshot below, the Hardware Specs panel displays a wide variety of information about your iOS device. The new panel also displays memory details of the device as well, ranging from physical memory to the user memory. This is a pretty cool option to have in your jailroken iOS device. Since Apple will not provide this low level information to its users even in the coming days, you can might as well brag about it to your friends. Obviously, you do need to have a jailbroken iOS device to install it. 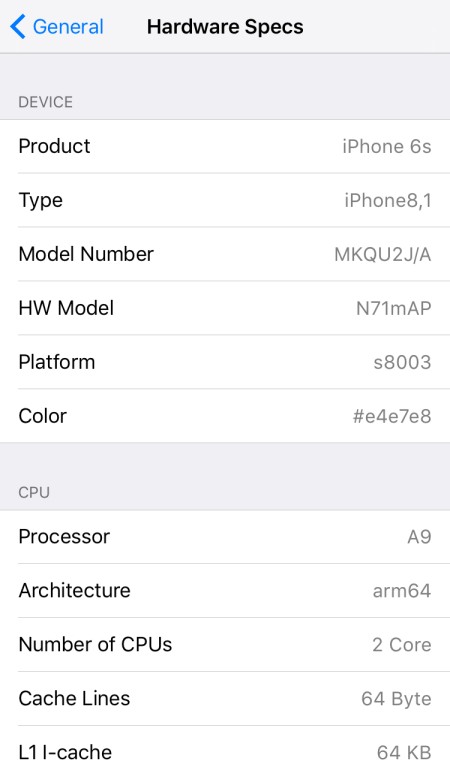 HardwareSpecs is a software-oriented jailbreak tweak that provides additional information about your devices' internal specification. The tweak is completely free of charge. If you're interested much, you can download it from Cydia's BigBoss repo right now.

As for now, what do you think about this new jailbreak tweak? Does it help you by any mean? Share your views in the comments section below.