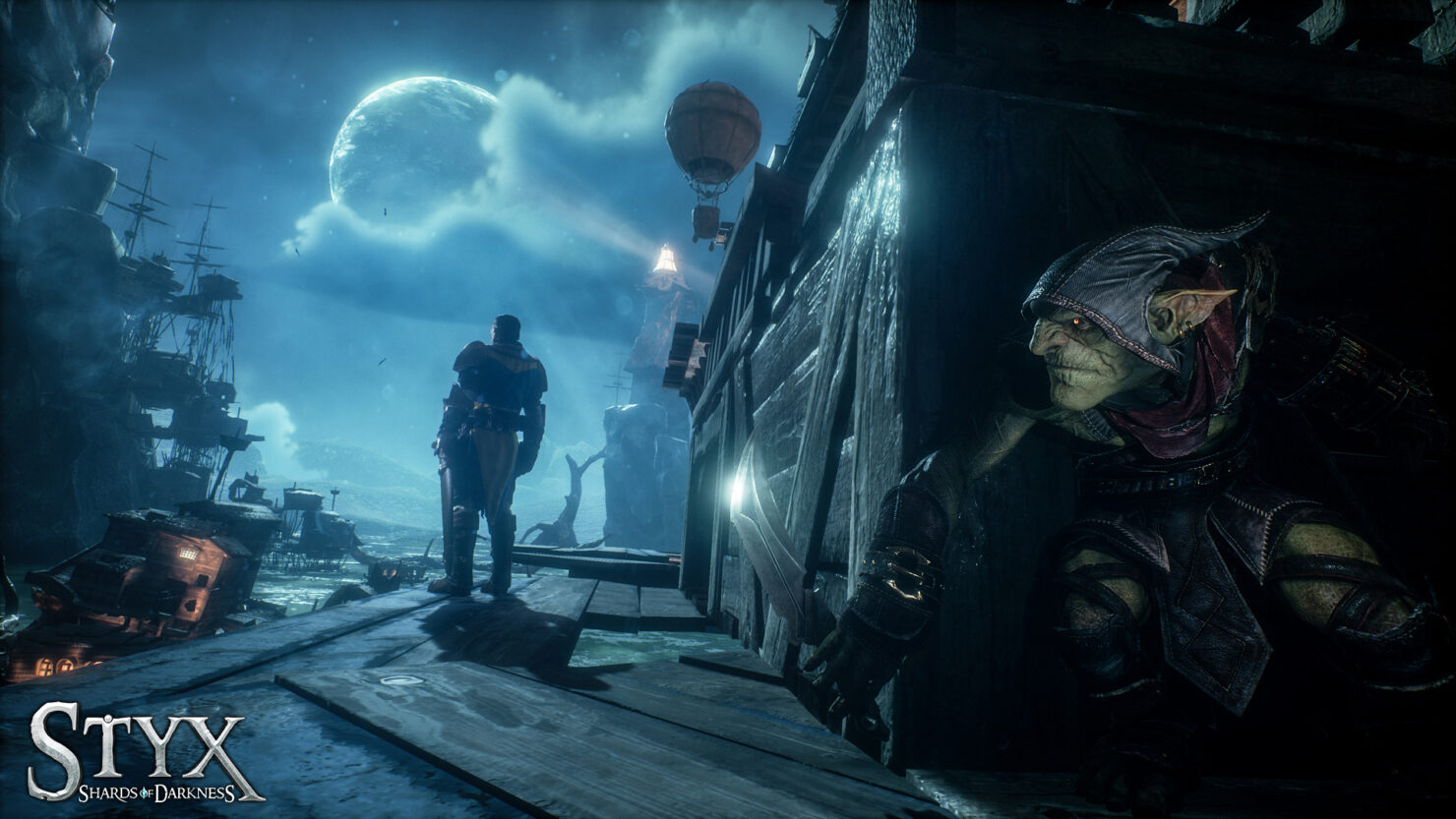 Styx: Master of Shadows was a fine game. Existing more towards the hardcore edge of the stealth action genre, many enjoyed it, while many still completely missed the goblin adventurer. With the sequel creeping closer and closer, hidden in the shadow of other releases, I stepped back into the role of Styx to play Shards of Darkness at a Focus Home preview event.

We return to the same darkened fantasy world, filled with goblins, elves and shiny things to steal. I was told, having never mastered the first game, to play on novice difficulty. I believed myself better than that, having forgotten how delightfully unforgiving the game is. I’m not entirely sure what the difficulty scale does, but I was almost immediately detected and cut down in the first few seconds of the tutorial. 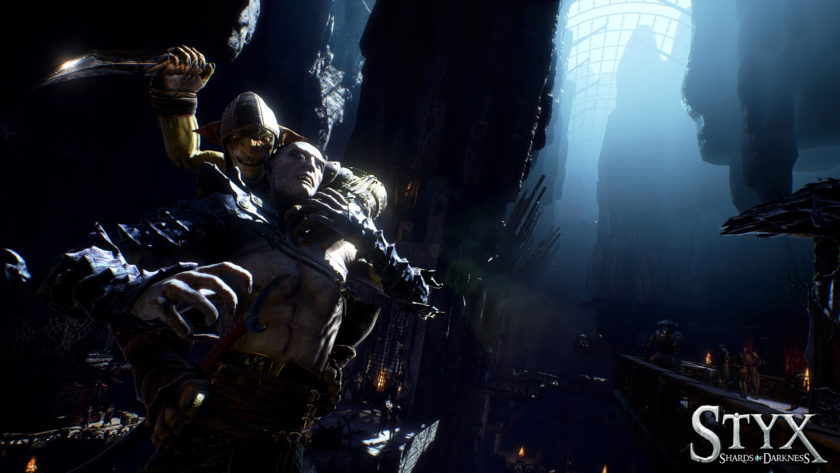 This is a hardcore stealth game, and as a little goblin amongst armored and armed humans and elves, open conflict is highly discouraged. While this might put some people off, the dependence on shadows, stealth and silence make for an enjoyable challenge on even the easiest difficulty. Most stealth games of late moved away from pure stealth. Games like Dishonored and Splinter Cell: Blacklist allow players to choose how quiet they want to be, and become an action game if all else fails.

Styx: Shards of Darkness is not so forgiving. If you are discovered in Shards of Darkness, by my accounts, you have but a few seconds to disappear before you’ll be cut down by whatever sword wielding maniac is charging you. Which is honestly very funny. When I was first spotted, climbing up a rope past about four people, I was left to madly dash around the multi-tiered structure trying to evade my pursuers. Bursting through doors and taking advantage of the ridiculous amount of staircases on offer I thought I had made my escape, only to climb through a window in full sight of half a dozen hunters, who killed me instantly.

It was only after Styx had cruelly mocked my skills on the death screen that I was reminded that I could have turned invisible briefly. But Cyanide Studios have taken on some much needed feedback from the previous entry in the Styx series. As death is swift, unforgiving and often hilariously clumsy, Shards of Darkness has encouragingly fast loading times, allowing you to get straight back into the game and pretend you never made that very obvious mistake.

There are a lot of new features and skills to try and help you avoid the loading screens too. Like in the original title, Styx can create a slightly malformed clone to act as a distraction, but this power has been expanded. The clone can now also act as a makeshift teleporter or checkpoint. Players can replace their clone, taking its place wherever it was. This coupled with the new clone cocoon that can be thrown to otherwise unreachable locations means players may create shortcuts by launching their clone, then immediately taking its place. Likewise, being able to replace your clone means you can leave it somewhere relatively safe and return to it if things become too dangerous elsewhere. 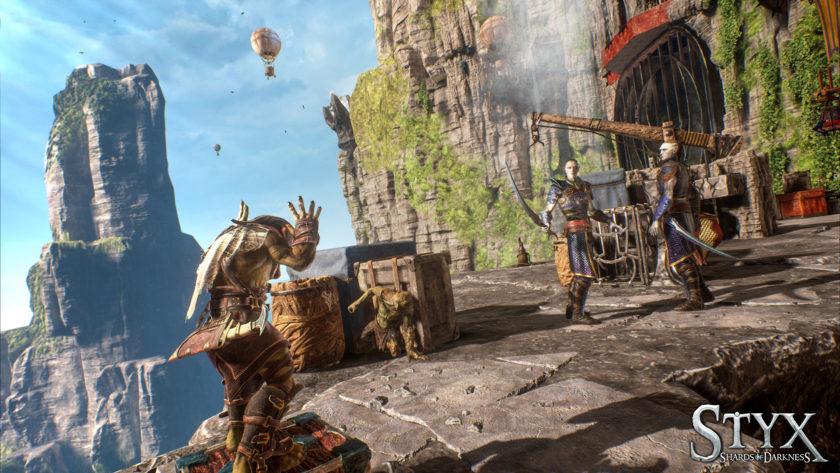 Although neither of these features, nor the handful of other new abilities that I was shown are unique amongst action games, they are all handled and implemented in a productive and meaningful way. Much like the game world, which is fairly generic in terms of fantasy tropes, Styx: Shards of Darkness steers into it and makes the best of it.

Shards of Darkness has a huge advantage in that anyone can pick it up and play it. There is nothing here too surprising or unfamiliar for those that have played stealth games before, and because of that low bar for entry, the game can be much more difficult and less hand holding. You are expected from the very beginning to understand how to use shadows and cover to avoid detection, to exploit your magic and equipment to traverse the locations and find your own solutions. Each of these mechanics are built solidly, they are fluid and woven into the world without much explanation.

Styx: Shards of Darkness is smarter, stronger and more comfortable than the first in the series. It smoothly balances player expectation and skill with a fine collection of mechanics to utilise. While perhaps it doesn’t offer much new to the genre, what is does is create a truly challenging and enjoyable experience for those that are fans of stealth games. It has a sort of cheeky, self-aware charm and humour that other stealth games often overlook, and encourages you to be ruthless, explore and hide.

You might not be an exiled empress seeking her revenge, or the best spy in a clandestine government agency. You are a goblin, with sharp blades and acid vials, and you’ll steal everything you want, no matter how many attempts it takes. Styx: Shards of Darkness launches on March 14th for PC, PlayStation 4 and Xbox One - stay tuned for more coverage as we get closer to launch.

Styx: Shards of Darkness Trailer Showcases The Art of Stealth