Dishonored 2, available now in physical and digital stores worldwide, was easily among this year's most anticipated games. That's no wonder when you consider how the first installment shocked the gaming industry with its combination of brilliant gameplay and unique setting.

The Empire of the Isles is a captivating fictional world in that despite its supernatural twists and quirky technologies, it's filled with characters whose motivations feel very realistic and grounded. This, in turn, contributes greatly to immersing players in this world.

At the very beginning of the game, as you probably know already, you'll be forced to make a choice between two possible protagonists: Corvo Attano and the Empress herself, Emily Kaldwin. Despite my fondness for Corvo, I decided to go with Emily as I felt that Dishonored 2 is her story. I don't regret it one bit after finishing the game, but then again I'm also eager to experience it as Corvo in the next playthrough with a bit of roleplay included. Whereas with Emily I went ahead and spared as many foes as possible, thinking that the Empress would not want her Empire to descend into chaos, Corvo may well give in to the unbridled rage for the usurpers who have dethroned his beloved daughter. I look forward to seeing that.

As someone who never played Dishonored again after completing it the first time around four years ago, stepping back in Dishonored 2 felt like finding a long-lost friend that never really went away, at least from that special place called memory. There are few action/adventure games that can compare with Arkane's formula in terms of gameplay smoothness. 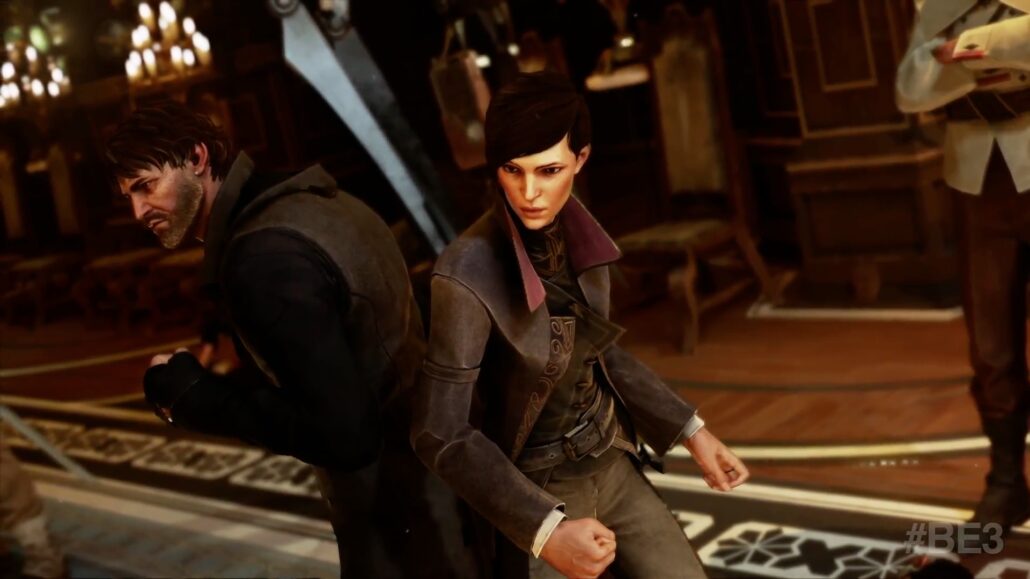 As I reflected on the game in between sessions, I found myself comparing it with Eidos Montreal's Deus Ex: Mankind Divided, released only three months ago. In my opinion, they are similar on at least two levels, the first one being that both games build upon their predecessors (Deus Ex: Mankind Revolution and Dishonored) by essentially maintaining and empowering an already successful gameplay formula.

The second is that even though both titles give you the opportunity to blast your way through with loud and frantic combat, these are clearly great stealth oriented experiences. There's a particularly satisfying feeling to exploring the environments in first-person view while finding all the ways to sneak upon (or past) your enemies.

After completing and thoroughly enjoying both games, I'm inclined to give Dishonored 2 a clear edge in this area. The stealth system devised by Arkane is both deeper, thanks to additional features like leaning from corners and hiding under tables, and harder even though it never becomes frustrating. The latter part is due to the excellent AI (for this purpose, not for others; more on that later), which on the Hard difficulty setting is more than capable of making you sweat to avoid being detected or having to kill. It took me almost eighteen hours to finish Dishonored 2 at Low Chaos, but I suspect those who are looking to get the Clean Hands (no kills) and Shadow (no detections) achievements have their work cut out for them. If you're looking for an even greater challenge, just refuse the Outsider's Mark when he first comes to you and try to complete Dishonored 2 with no powers to obtain the Flesh and Steel achievement.

Some powers are particularly useful while exploring the extraordinarily intricate non-linear levels of the game. These are without a doubt the single standout feature of Dishonored 2. The way it's structured is that your chosen protagonist will be dropped at the edges a certain district, with the objective to gather information and/or resources to infiltrate the mansion of Delilah's lieutenant.

Exploring the buildings and mansions of Dishonored 2 is exceedingly satisfying and useful at the same time. The first because it often requires players to really think about ways to circumvent certain obstacles and the latter because it yields resources, information and lore in equal amounts. Combing through the rooms is guaranteed to provide audiographs and notes, which in addition to eavesdropping can even unlock alternative ways to defeat your enemies. 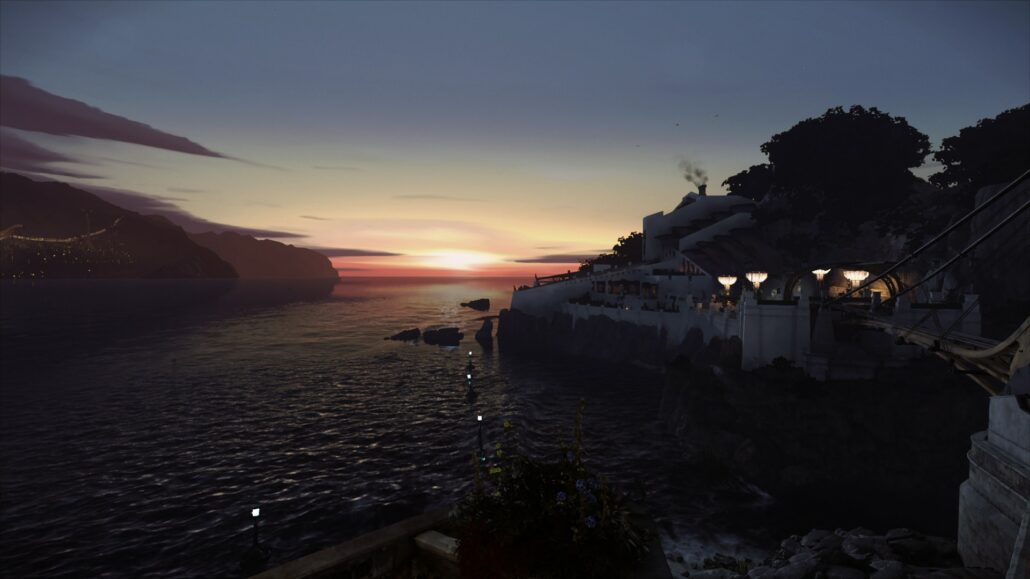 But there's more to it. Upon completion of each chapter, the game provides a detailed report on everything you've done during the mission. That's where I learned about the special actions deftly hidden in each mission, side objectives that range from saving the head of Dunwall's newspaper to addressing the general population of Karnaca via the microphone in Duke Abele's chambers.

I felt compelled to try and find them all, since they fit so well into the main overarching narrative. Interestingly, the plot is a direct continuation of Dishonored's DLC episodes Knife of Dunwall and The Brigmore Witches: Delilah, the main antagonist in Dishonored 2, wasn't even mentioned in the original campaign and the same goes for Meagan Foster, who aids Emily or Corvo throughout this sequel.

As someone who never played those DLC episodes, some past events and character backgrounds were lost to me. That's not to say it was necessarily problematic as it inadvertently added a shroud of mystery, but in hindsight I would recommend playing Knife of Dunwall and The Brigmore Witches before Dishonored 2 if possible.

This is no RPG and you can't really talk your way out of situations with elaborate dialogues, but there's some great writing to be found here. The characterization of Delilah's lieutenants is perhaps the crowning achievement in this regard, with a cast of memorable characters. The same is true for the mansions that host them, which can be considered characters themselves with their amazingly complex layouts and strikingly unique visual designs. It's a hard choice but if I had to pick, I'd probably choose Duke Abele (voiced by the excellent Vincent D'Onofrio) for best character and Aramis Stilton's mansion for best level, where you'll have to play with a time device in a clever and rather unforgettable way. Speaking of voice performances, Robin Lord Taylor (who plays the Penguin in Gotham's TV series) is an excellent fit for the Outsider with his combination of mocking and otherworldly tone.

Arkane Studios definitely nailed the setting for Dishonored 2, that's for sure: after the drab skyline of the Empire's capital Dunwall, Italian-inspired Karnaca is a welcome change for the eyes with its sun-drenched climate. The lighting captures perfectly the sensation of being in the southernmost part of the Empire. 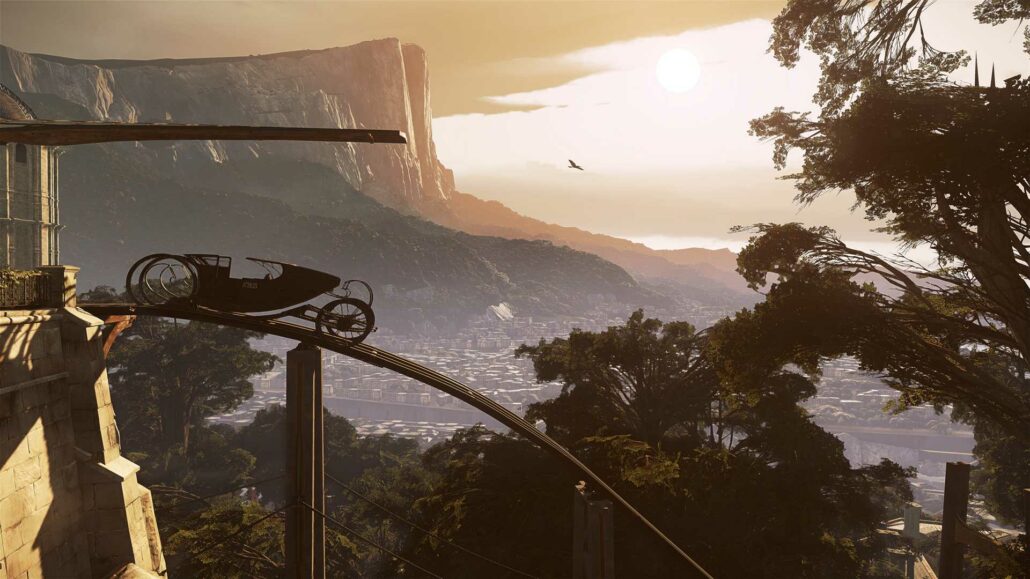 While the game is no technical wonder, it can look quite impressive at times, as you can see in the night view screenshot above. That's mostly due to the beautiful art style, which is no less remarkable than the first Dishonored even without Viktor Antonov's direct involvement in the project. Once again, art direction in Dishonored 2 is likely to win multiple awards. The sea is also rendered very well, while the interiors are filled with countless details worth noticing.

Sadly, there's the other side of the coin to evaluate as well. Performance is disappointing on PC, as covered in our previous reports.

My configuration, powered by an i7 6700K CPU with 16GB of DDR4 RAM and an overclocked GTX 1080 GPU, is used to running games at 4K and Ultra settings with relative ease. To minimize frame rate drops in Dishonored 2 I had to drop the resolution to 2560x1440 and further below that via the Adaptive Resolution setting; even so, there were hitches and stutters now and then. While the game is definitely playable, it is also far from the ideal experience that it should have been given that this is no Crysis when it comes to technical feats.

Luckily, this could be fixed via patch and Arkane Studios promised that it's coming soon. Feel free to add half a point to the score below if and when the developers manage to crush most of the performance issues. This is by far the biggest thorn in Dishonored 2's side, though there are some minor issues worth mentioning too.

For example, earlier in the review I praised the great Artificial Intelligence. That's true for the most part, but the AI also does not seem to care at all if you steal from them in plain sight. Both civilians and guards will quickly react if they find you where you're not supposed to be, but besides that you're free to snatch anything you can from right under their noses without repercussion. It's obviously not the main point of the game, far from it, but it's a little underwhelming to have this immersion breaker when you consider that other games have been tackling this for years.

Similarly, even when alerted the guards will not follow your character if you move to another part of the level via loading screen. This is because of the game's gated levels design, of course. Arkane seems reluctant to create a full blown open world, but developers like CD Projekt Red and Rockstar Games have proven that it's possible to create huge open worlds without sacrificing critical elements like gameplay or story at all.

That said, I simply cannot wait to dive back into Dishonored 2 once the inevitable DLC episodes are released.

Reviewed on PC (code provided by the publisher). Also available on PlayStation 4 and Xbox One.