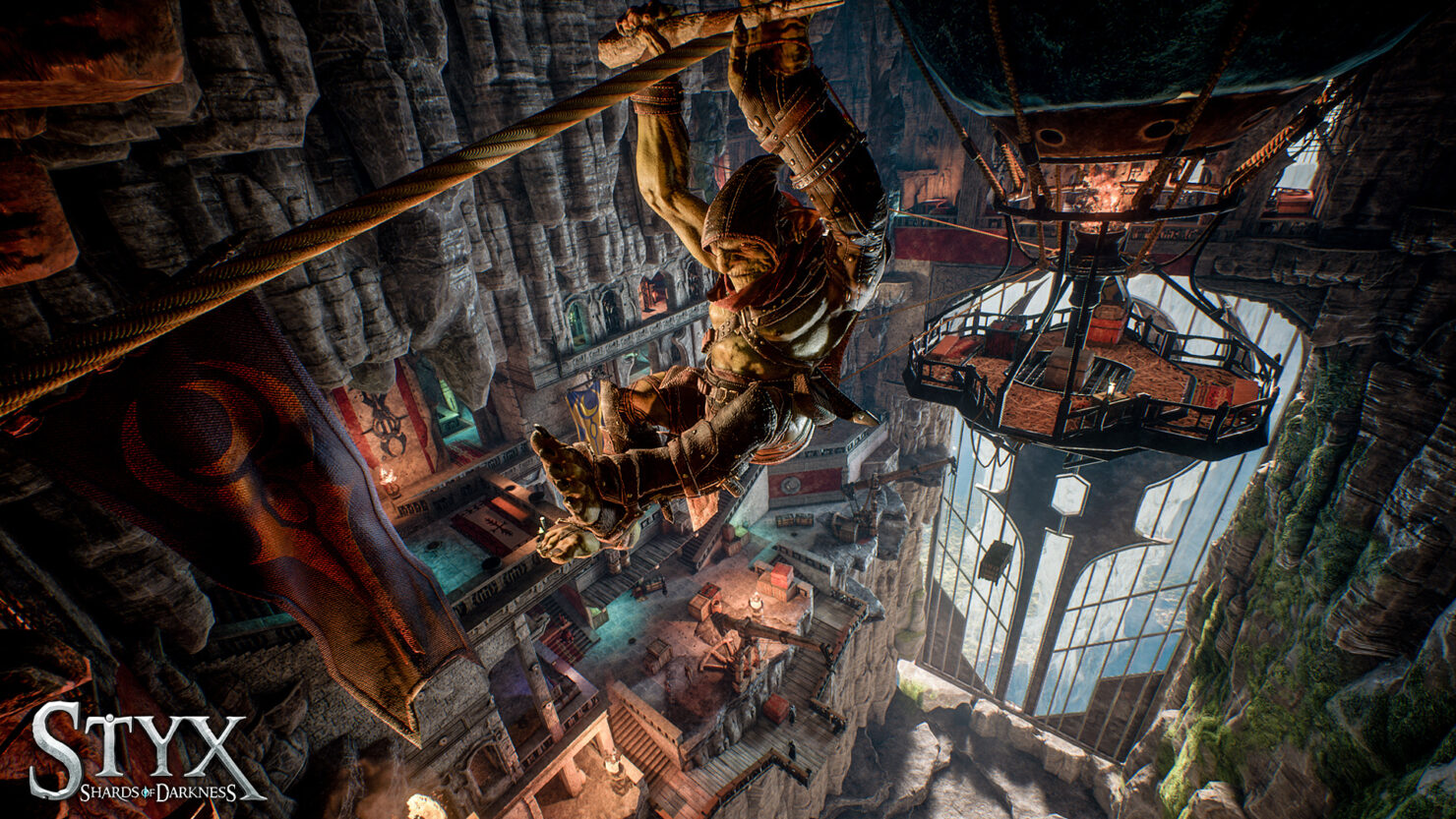 Cyanide's Styx: Shards of Darkness is due for release in about a week from now. After previewing the stealth game sequel recently, we had the chance to talk to Cyanide's  Julien Desourteaux, Lead Level Designer.

He opened up on the game's longevity as well as the most important new features, such as the co-op multiplayer. He also confirmed that Styx: Shards of Darkness won't have any dedicated support for PS4 Pro, which seems to be a trend lately (Yooka-Laylee won't have it either) though at least PS4 Pro users will be able to use Boost Mode as soon as firmware 4.50 is released.

Styx: Shards of Darkness is out on March 14th worldwide for PC, PlayStation 4 and Xbox One.

Styx: Master of Shadows is often cited in game forums as one of those games that were slightly underrated when they first came out. Many players seem to be fond of the main character in particular. Were you surprised by how much people like the goblin Styx?

Since the release of Of Orcs and Men, we already knew that Styx as a character had huge potential - that's why we wanted him to star in his own game. However, we didn’t expect quite so much love as what we received for our goblin!

How long has it been since the events of the first game? Will the story of Shards of Darkness explain what Styx has been up to in the meantime?

About 20 years have passed between the two games. All that is known (Styx 1 spoilers ahead!) is that after the fall of Akenash, a goblin invasion is devastating the world and Styx is among them.

Styx used to live in Thoben, city of thieves. He is smarter and more agile than other goblins, making him a good match for the many, less-than-noble jobs to be found in Thoben.

He is a shadow, a legend of the city, with few allies and many enemies.

It’ll enhance your enjoyment to know Styx’s other stories. However, we’ve ensured that you can play Shards of Darkness as a player completely new to the series – no prior knowledge is necessary to enjoy the story, and you’ll have a lot of fun even without knowing a thing about Master of Shadows or Of Orcs and Men!

This sequel runs on Unreal Engine 4 and features "larger environments". Can you quantify roughly how larger than the first game?

Rather than solely taking place in a huge tower (like the tower of Akenash in Styx: Master of Shadows), Styx will travel around to a variety of new locations in the world. These include airships in flight, a hunter village, a huge city under a mountain, roach-infested mines and more.

With regards to level design, we added many different ways to improve player navigation in the level, while keeping the same degree of verticality we had in the first game.

What's the single biggest improvement in the feature set when comparing Shards of Darkness to Master of Shadows?

Styx's flow of movement has been improved, and animations are much smoother. He can now use ropes, and the crafting skill tree branch offers more freedom for players to experiment.

Having more diversity in missions and their objectives was one of our main intentions for this sequel. The player will almost always have a few objectives active at the same time, so they can choose the order in which they want to achieve them.

This feature is good for replay value, as some objectives have alternative ways to complete them. Additionally, in the co-op multiplayer, players can choose to stick together or split up to achieve the objectives.

In terms of stealth gameplay, what do you think will set apart Styx: Shards of Darkness from the many games in the same genre?

I think Styx himself, our nimble, agile and fragile goblin, is the primary asset that sets our game apart from others. For example, when detected you do not have the strength or weapons to fight enemies face-to-face like in many other stealth games. Because of this, direct confrontation is not a good option - this game really harks back to the roots of the stealth genre.

The official description hints at a "complex narrative". Can you give us any tidbits? Also, do you have an estimate on how long it will take to complete Shards of Darkness?

There are a lot of different characters in Shards of Darkness, and a complex plot with twists, surprises and epic moments, but I don't want to spoil it for you!

Regarding the length of the game we did a lot of playtests. The average player will complete the main campaign of Shards of Darkness in around 15 hours, but that’s not including the completion of every secondary objective and emblem.

What are the chances that Styx will become a trilogy with another installment following this one? Will we ever see Styx working with Arkail again?

We really like the lore that we are building around Styx and the other characters in our universe! So... maybe. ☺

Are you going to release any content pack/DLC after launch and if so, would those be free or paid?

No DLC or content packs are in production right now, only ideas.

Will the game support HDR technology for those who have compatible displays and if so, on which platforms?

The Nintendo Switch is launching just before Styx: Shards of Darkness. What do you think about the console as a whole and are there any chances to see the game on the Switch in the future? Have you been in contact with Nintendo at all?

We are only focusing on the PC, PS4, and Xbox One for Shards of Darkness at the moment.

What's your chosen target resolution and frame rate for Xbox One and PlayStation 4? Also, are you going to support PS4 Pro and if so, what kind of enhancements can users expect?

No plan right now for the PS4 pro.

On the PC front, what kind of hardware will be needed to play at 4K resolution? Will there be any extra effects or higher quality textures when compared to consoles?

To play at 4K on PC at a steady framerate, you’ll need to have a good hardware setup, as Unreal Engine 4 is quite intensive on resources.

As for the PC options, we do have some visual treats for PC gamers. These include higher resolution, higher texture quality, faster load times, as well as better anti-aliasing and shadow distances.