Deus Ex: Mankind Divided Review – We Totally Asked for This

It's been exactly five years since we left Adam Jensen in the Panchaea Arctic base, stopping the unfortunate Augmented Incident in 2027. Only two years passed for him, though, and the political climate in 2029 is at a crossroads with pro and anti-Augmented factions fighting against each other.

Jensen now works for Interpol's Task Force 29 (headquartered in Prague, Czech Republic), though secretly he's also collaborating with the hacktivist group Juggernaut Collective via his friend, Alexandra Vega. Incidentally, Prague is one of the cities where the tension between normal and mechanically augmented humans is quickly reaching the breaking point.

Just walking around serves as a reminder of that. At the Metro station (which can be used to travel quickly between different districts) there are different lines for normal and augmented folks and often even fellow police officers will stop Jensen with an excuse, insult him before letting him go due to the special papers he carries. There are also scenic arrests and beatings of augmented people, though you can't really interfere.

That's one of the few pet peeves I have with Deus Ex: Mankind Divided. The simulated world cannot but disappoint a little those who are used to the best open world games, such as The Witcher 3, Grand Theft Auto V or Fallout 4. There are no dynamic events giving the world a more realistic feel; there is no day/night cycle or weather system; while the NPCs do roam around a bit (and will panic or alert the police if they notice you doing something you shouldn't), they're clearly not following proper schedules of their own. Ten years after Radiant AI debuted in Elder Scrolls IV: Oblivion, it is a bit underwhelming.

Deus Ex: Mankind Divided makes up for it just like Human Revolution did, with the incredible detail of what's actually there. While the explorable world isn't comparable in size to truly open world titles, the buildings and interiors are extremely detailed; this helps greatly in making Prague look like a real place. 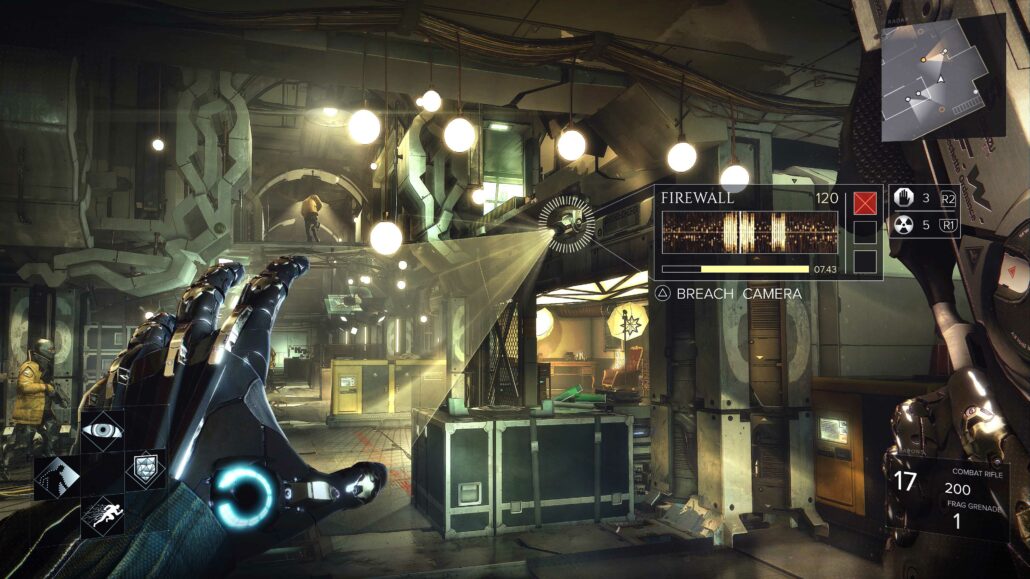 What's possibly more important is that there are so many ways to access the buildings, it's a joy to find them all. Sometimes you have to be a little creative in order to figure out exactly how to get where you need to go, and that's always a huge bonus in my book since most games have long discarded this pivotal element: observing the environment, evaluating the tools at disposal and then figuring out how to overcome an obstacle to keep progressing.

With Deus Ex: Mankind Divided you can try to be an invisible agent, an unstoppable war machine or anything in between. Personally, I've tried as hard as I could to adhere to the former type as that's how the Adam Jensen I've created in mind would behave, sneaking through the enemy lines with his stealth tech and non-lethal attacks and keeping in mind that the grunts often have little choice.

The stealth gameplay is quite satisfying overall, almost ranking up with the best of them. The only negative point for me was the developers' decision to relegate melee takedowns, both lethal and non-lethal, to a cutscene that must have played dozens of times by the time I've completed the game. It is a borderline nonsensical choice that I'm still struggling to understand - setting it as a real time move would have made gameplay much more seamless for those taking this path.

Of course, I did occasionally stumble in the accidental firefight here and there, which gave me the opportunity to sample the enhanced shooter mechanics. I'm happy to report that they are more than adequate, once again almost rising up to the best in the genre, though I'm still not completely sold on the cover system used here.

The AI in both cases (stealth and open combat) proved to be challenging enough at the maximum difficulty level available at first, without providing needless frustration.

Deus Ex games have been traditionally known for their complex plots and deep choices; Mankind Divided is no different, thankfully. The storyline explores some of the hottest contemporary themes (chiefly the multicultural and multiethnic society) through the lens of cybernetic augmentation, and it does so admirably well. It's gripping from beginning to end, which is where it sadly leaves a sour aftertaste: the ending just leaves too many unanswered questions to be pleasing. We'll have to see if the upcoming DLC expansions (the first one, System Rift, is due shortly) can fix this.

RPG fans won't be surprised to learn that some of the best writing can be found in the side quests, as that's often the case in this genre. Some of them can be easily missed unless you're exploring every nook and cranny of Deus Ex: Mankind Divided, which is why I highly advise to do exactly that. On the sound front, the performance of voice actors is excellent (with Elias Toufexis easily stealing the show as Adam Jensen) and so is the soundtrack.

Finally, the graphics. Deus Ex: Mankind Divided is powered by the brand new Dawn Engine, derived from IO Interactive's Glacier engine, and it can look amazing at 4K resolution on PC - although that's not always the case. The quality of the average NPC model, for instance, is not quite on par with the best recent games. The game looks at its very best when there are lots of lights in the scene (such as in Golem City), but can occasionally seem a bit flat in other places.

What's worse is that performance is also slightly disappointing. There are better looking games which will tax your hardware less than this one, though it's still very much playable as long as you tune down some of the settings.

Graphics gripes aside, Deus Ex: Mankind Divided is more than the sum of its parts. There are a few issues that make it far from flawless, but it's still a remarkable game that should be in the collection of every gamer.