343 Industries is delivering on its promise by continually transforming Halo 5: Guardians by adding more content, maps, items, gameplay and overall immersive Halo experience to the game. The Xbox One-exclusive shooter is set to receive its next big update early next month, and while complete details on the update will be released in full in coming weeks, the developer has shared the first images and details about the next free content drop, called Ghosts of Meridian.

In a recent blog post on the official Halo website, 343 Industries has revealed the first images and details regarding Halo 5: Guardian’s free content update; Ghosts of Meridian. Along with other details, the developer talked about the highly anticipated Warzone map that will stand out from the game’s existing Warzone battlegrounds. The upcoming update “will bring with it brand new weapons and weapon skins, helmets and armors, assassinations and emblems, vehicles, and a new Warzone map,” reads the blog post.

The new Warzone map is called Skirmish at Darkstar, and according to the developer, it “brings an entirely new feel to the Warzone experience, with a variety of unique sightlines, flank routes, and cover pieces that invite you to push across and throughout the map, dodge danger from patrolling vehicles, and perfectly time an attack on opponents. If you've been anxiously awaiting a new place to bust out your finest Reqs and lay down destruction, this is it."

Senior concept artist at 343 Industries Josh Kao also added a note, explaining the philosophy behind the map layout for Skirmish at Darkstar. “For Skirmish at Darkstar, the team decided on having a derelict ship in the middle of the map on the mining planet of Meridian - which you can see to the left of the concept. I originally thought about having a space elevator in the concept, but we decided against it because there was already one in the campaign. I also wanted to capture the mood of what a mining planet would feel like, with the sunlight peeking through its heavily polluted atmosphere,” he said.

343 Industries promised to show fans more of the new Warzone arena as we get close to the update. For now, here’s a brand new screenshot “approved by the Environment Art team” followed by “some fantastic art from the concept team.”

Ghosts of Meridian also brings a brand new mech-like Mantis vehicle called Hannibal Mantis to Halo 5. You can check out the new Mantis in the first concept art shared below. More details will be revealed soon. 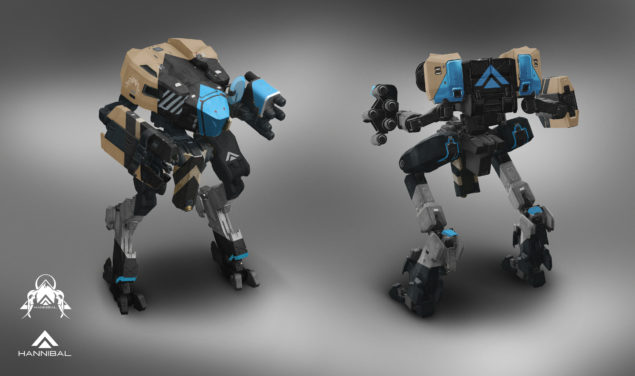 Since the launch of Halo 5: Guardians on Xbox One in October 2015, 343 Industries has released a new, free update every month providing players with more content. In November, Halo 5 received The battle of Shadow and Light, in December; Catographer's Gift, in January; Infinity's Armor, and in February; Hammer Stor. This streak, however, now comes to an end as there will be no content drop this month with Ghosts of Meridian scheduled to launch in April.