While many are done benchmarking the PC port of Rockstar’s open-world action adventure masterpiece on a number of different hardware, many, including devoted fans of the series and PC hardware enthusiasts, are still busy testing the performance of GTA V on assorted hardware in every way possible, and that is why it comes to our knowledge today that the game that looks unlike anything while being rendered at extreme resolutions with SweetFX requires around 14GB of VRAM to run at maxed out settings on triple 4K monitors. 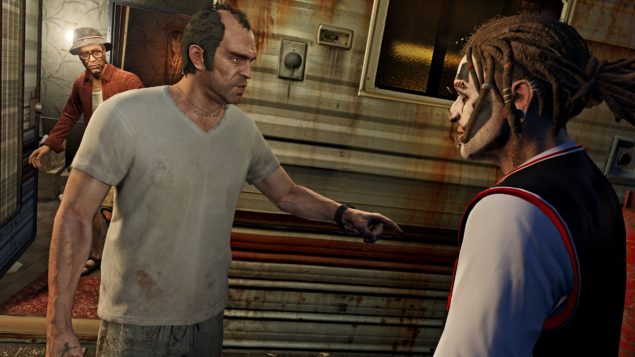 Thanks to GTA V’s new editor mode, and fans who have waited for long to get their hands on the PC version of the game, there is already tons of in-game content such as breathtaking gameplay videos and stunning screenshots present on the internet, but new and more is always good. And so, those who are still waiting for their copy of the game on PC, can feast upon all these screenshots and videos before they are finally able to play the game.

Looking at the recommended system requirements, GTA V doesn’t look like a much demanding title, but of course, those are only suggested to play the game at 1080p resolution with 60 frames per second. If you happen to feel like getting the best out of this PC port at 4K resolution with high-end graphical options enabled, you will need much more horsepower to fulfill your desire. Just as Rockstar stated; “a high-end SLI or Crossfire setup” will be required to experience GTA V in 4K with 60 frames per second. But what if your setup consists of more than one display?

Well, the good folks over at TweakTown have found that GTA V will consume 14GB of VRAM if you try to run it on triple 4K monitors. According to the site, the game consumed 7GB of VRAM at most while it was being benchmarked on various graphics card at different resolutions, but when the game was running on triple Acer XB280HK monitors in NVIDIA's 4K Surround at 6480x3840 resolution with anti-aliasing enabled, they noticed that it was using around 14GB of graphics memory. So, now if you were planning to pull off anything like this, make sure you are fully loaded on that VRAM.

In addition to that, K-Putt, a hardware enthusiast who is best known for his stunning SweetFX configurations, recently uploaded a bunch of really heavy GTA V screenshots showcasing how GTA V looks like while being rendered at extreme resolutions with SweetFX enabled, and of course, it looks terribly beautiful. Each screenshot weighs in at around 40mb, so I am only sharing a few here. Make sure you click each one to view it in full size. For more, you can visit K-Putt’s Flickr page here.