G.Skill is ready for the launch of Intel's next generation high-end desktop platform codenamed Haswell-E with their latest Ripjaws IV DDR4 memory kits which will be available in 16 GB and 32 GB variants. G.Skill's Ripjaws DDR4 memory kits are now unveiled and readily available for pre-order at Overclockers.Co.Uk who have listed nine models of the Ripjaws IV memory kits in different color flavors of red, black and blue. 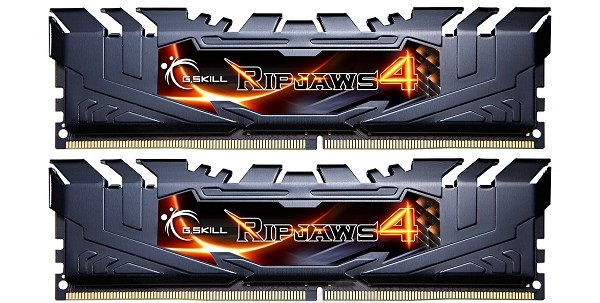 While the Intel X99 chipset motherboards and Haswell-E processors are expected to launch on 29th August, the memory kits will be available in retail on 25th so system builders can gear up their PCs. You can still pre-order the various memory kits from online retailers including OCUK who have listed down a large variety of DDR4 memory kits from G.Skill, Corsair, ADATA, Crucial and Avexir. Kingston so far hasn't been listed but we will be looking at their HyperX series DDR4 memory in a few days.

One of the most interesting features regarding the upcoming Haswell-E HEDT platform is the fact that it will be the first consumer platform to support DDR4 memory (optimized for quad channel operation). Being Intel’s high-end platform, it will also include the first 8 core processor from Intel codenamed Core i7-5960X based on Intel’s Haswell microarchitecture. While we still have to see real-time performance benefits of DDR4 memory in action, we know now what kind of prices to expect from the upcoming memory kits for future generation platforms.

OCUK have listed a total of nine memory kits for pre-order which include five 16 GB DDR4 memory and four 32 GB DDR4 memory kits. All of the memory kits feature the Ripjaws IV branding which is the latest iteration of the Ripjaws series memory from G.Skill. The market is making a transition into DDR4 memory which is going to be the standard of memory for future generation platforms from Intel and AMD whereas the X99, as mentioned is the first to feature support for DDR4 memory on the consumer front. The G.Skill DDR4 memory kits are available in three colors which include black, red and blue. The heatsink has a nice touch to it and will be compatible with most coolers since height isn't an issue. The PCB is colored black and its not known whether G.Skill will bundle these with a fan cooler such as their Turbulence cooler.

Update: Our friends over at Ocaholic have posted an unboxing of the Ripjaws IV memory kits and taken some beautiful shots of the new DDR4 memory solution from G.Skill. Do hop over their site to get a glimpse of the new and enhanced Ripjaws memory. 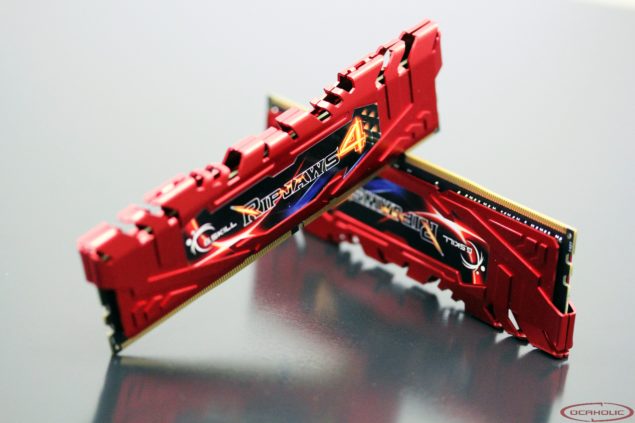 As the 4th evolution of the Ripjaws series, Ripjaws 4 is outfitted with an all-new designed heatspreader. Available in Red, Blue, and Black! And don’t worry; Ripjaws 4 has a module height of 40mm – the same height as previous Ripjaws family modules – and will be compatible with most CPU heatsinks!