ADATA has released some details today regarding its upcoming memory lineup. The modules are a part of a larger display of a variety of the company's products at this year's Computex. The Taiwanese manufacturer will be displaying a variety of products including various SSD solutions such as PCIe SSDs in M.2 and 2.5'' specifications with transfer speed three times as fast when compared to present SATA 6Gb/s, server grade DDR4 to support Intel Xeon E5-2600, special memory modules for overclockers, namely the DDR4 XPG Z1 and wireless chargers. 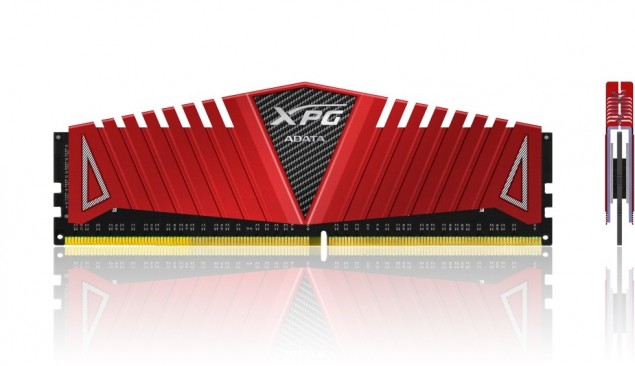 Picture Shows Boomerang Shaped ADATA XPG Z1 DDR4 module. With a Frequency of 2133 MHz Module Is Expected To Come In Variety Of Colors.

Two months back, ADATA had officially joined the list of manufacturers to announce their DDR4 products. The memory modules announced were to come in densities of 4, 8 and 16 GB. The operating voltage for the modules is 1.2 V. At the time of the announcement the company had claimed that low power consumption and high frequencies made the memory modules suitable for server, storage and networking applications. The presence of a close partnership with Intel towards development of memory modules supporting the Haswell-EP was also announced. Well, the company has released a picture showing a XPG memory module, and this can be expected to be the DDR4 module announced earlier. The ADATA XPG Z1 DDR4 memory modules will have up to 16 GB of memory. In addition, the power consumption rating for the modules will be 1.2 V, as reported earlier. Furthermore, the frequency is also to be 2133 MHz and the modules are expected to be shipped in various color's to match user preferences.

It should be added however that the picture released just as well might be the company's XPG V3 DDR3 RAM lineup. This will also be showcased at this year's Computex. Both the ADATA XPG Z1 DDR4 and XPG V3 DDR3 use the same heatspreader design. In addition to offering significant overclocking abilities, both the modules also adopt airfoil for heat sinks. The XPG V3 DDR3 also features a replaceable heat sink design to allow for further customization. The ADATA XPG Z1 DDR4 will however not be the only DDR4 module to be showcased at Computex. The company will also present it's server grade DDR4 RDIMM, which supports Intel's Xeon E5-2600 v3 series. The server grade memory is expected to have 16 GB density, 1.2V power consumption and 2133 MHz frequency.