Google reportedly has the next Nexus tablet in the works.The tablet is HTC's 9 inch Volantis and quite a few details are available about it. The tablet is said to feature a 8.9 inch 2048 x 1440 display with a 4:3 aspect ratio. It is to come with a Nvidia Tegra K1 'Logan" 64 bit processor. In addition, it is to feature an 8 megapixel rear camera with optical image stabilization and a 3 megapixel rear camera. We've covered the complete rumored specifications of the HTC Volantis here. In addition, for a detailed comparison of the Google Nexus 8 with Apple's upcoming tablets, click here. Well, new information has surfaced related to the Google Nexus 8 or the HTC Volantis. The information is from @evleaks and it includes several updates to the previous information. 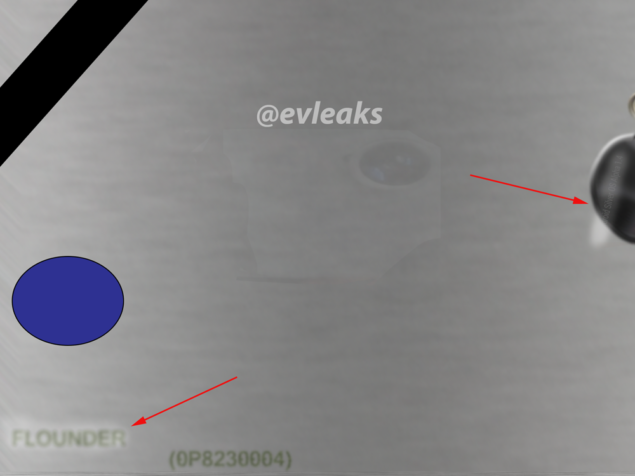 @evleaks has posted a Volantis 'macro shot' which mentions the codename 'Flounder'. The HTC Volantis is to reportedly feature 5 GB DDR3 RAM, though according to @evleaks this is not final. Other features disclosed by @evleaks include a 64-bit Tegra K1 processor as well Snapdragon 810 processor being tested. Display size of the HTC Volantis is said to be 2560 x 1600 pixels, with the same 8.9 inch size. A 5/8MP 1080p rear camera with BoomSound speakers are also said to come with the HTC Volantis at the time of launch. The image also mentions "Android OS Alpha 1.4". This means that the HTC Volantis might as well be one of the first tablets to be a part of Google's Android Silver program. Previous rumors have pointed out the tablet being the Google Nexus 8. Whether this inclusion in the Android Silver program also makes the tablet a part of Google Nexus is yet to be seen. The HTC Volantis is expected to come around Q4 this year.