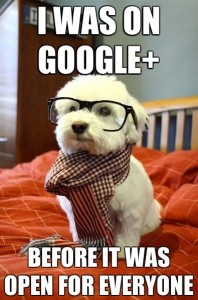 Google's spanking new social network is the place to be these days, at least on the internet that is. However to the dismay of many, it's still invite only and so far only a few lucky have had a chance to experience it first hand. Lets face it, if you aren't on the Plus, you're not considered cool enough.  According to Google's Dave Besbris they're currently throttling invitations. What does that mean? It means if you sent bulk invitations they're most likely to be purged in the whole throttling process. So if you want to invite that special someone, then send him/her the invitation only because chances are it will be successfully received this way. Here's a direct quote of what Dave, who happens to be the engineering director of Google + had to say

As I bet you've noticed, we are facing pretty incredible demand for Google+ invites.

As Engineering Director of Google+, I wanted to take a moment to explain why we're growing the system slowly. First, we want to make sure our infrastructure scales so the service remains fast and reliable. Second, we want to ensure that bugs are fixed while there are still a relatively few people in the field trial.

Things are going well with the systems right now so we feel comfortable enough to open up invites for a brief period. Our goal is to double the user base in the field trial. (Sorry, we're not giving details about how many folks are in the field trial yet).

So, in a few minutes, we'll open up invites again.

We continue to throttle invites, so please don't mass invite folks as it won't work. If you invite a handful of your most important friends and family you're much more likely to get these folks into our system.

Thanks again for providing so much wonderful feedback!