How Google Drive Wins Over Its Competition?

Google Drive is a handy Cloud Storage and Synchronization service which is linked with all of your Google's online services including Gmail, Android, the Chrome and Google's online applications like Google Docs but is now also called Google Drive. Amazingly the most common form is a file synchronization tool, it has many added extras which are perfect for helping you work in the Cloud.

Google's free offering is the best pricing option available with the most generous of its rivals. You can get 15 GB for totally free just by having a Google account. Though paid storage options are incredibly cheap, 100 GB of storage will cost you $2 a month, which is a surely small price, even the most impressive part is that for $10 per month you can get 1 TB of storage, may be more than that your physical hard drive space. The limit of a single file size you can upload is 1 TB.

The one annoying part is that it's shared between your Gmail and Google+ social networking accounts as well, although only large photos uploaded to Google+ will count towards your limits. YouTube, Google's video sharing service doesn't count towards this total.

Drive's desktop application for Mac and Windows is clean and clear, but it does all of the things we'd expect of it.  After installing it on your system, uploading a file to Drive is as simple as normal copy/paste on your computer. It also have selective synchronization options, meaning you can choose which folders are kept up to date on each device on which you install Drive. 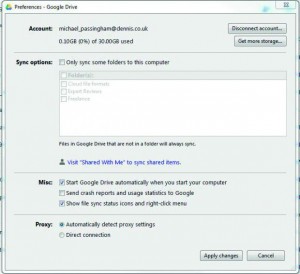 Anyhow, the file get modified, Google Drive immediately bring that change to the cloud, ensuring your files reflect the latest version. Sharing files with friends and colleagues from the desktop interface is somewhat more complicated than with the likes of OneDrive and Dropbox. (Just right click the share button, you're presented with a dialogue box which forces you to decide exactly how you want the file to be shared, and with whom.

While the true power of Google Drive can be found on its web and mobile services which means users can also be able to edit Microsoft Office format files such as .docx and .xlsx within Google Drive without having to convert it to a Google file format first. Although this feature is still in its early stages, it greatly increases Drive's flexibility for users who frequently move between Microsoft Office desktop software and Google Drive's web applications. You all need is to download a Chrome extension in order to make this work on your PC. 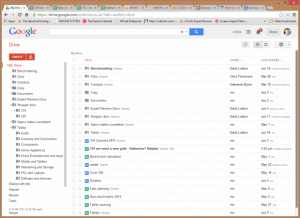 It also included are web-based apps for document, spreadsheet and image editing, presentation software and tools to create web forms and surveys. They all are excellent for working on relatively simple projects.

The well known smartphone and Tablet apps for Google Drive are pretty good, but there aren't many of them. The software can only be intalled on iPhones, iPads and Android devices, (sorry BlackBerry and Windows Phone users, you'll have to trust third party applications to manage Google Drive). 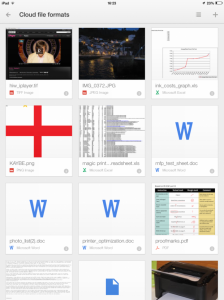 Frequent internet connectivity needed to work best, but you can also individually select files or folders to be available offline. There is an unfortunate quirk with this which we found on both the iPad and Android version of the apps: having a file downloaded to a device stops it from being updated, even though the changes are made after the download. This means that you could end up having an important file stored on your device that's out of date. Not sure whether its a bug or a feature.

However, Google Drive is by far the best and most frequently used valuable Cloud Storage, both in terms of amount of available storage and extra added features. All I want to say is that its a worth to use this best-value Cloud Storage.