Today we get the chance to take a first look at Galax's hall of fame Nvidia GeForce GTX 980 and GTX 970. And what a sight it is. The HOF series has always been Galax(y)'s flagship line-up. With fantastic factory overclocks, alluring aesthetic and plenty of features. 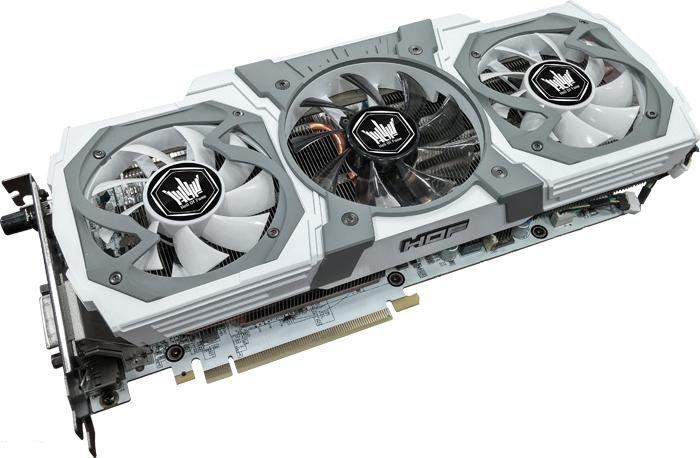 .
In terms of performance, the GTX 970 HOF features a clock speed of 1216/1380mhz. While its bigger brother the GTX 980 HOF features a significantly more aggressive base clock speed of 1304mhz and a slightly higher boost clock of 1418mhz. Galax also lists overclocking results of  >1.5Ghz on air and >2.1Ghz under LN2. Partly thanks to the over-engineered and very impressive cooling unit. And party thanks to the high quality components and 10 phase power design. (8 GPU phases and 2 VRAM phases)

And the new HOF Nvidia GeForce GTX 980 and 970 cards definitely do not disappoint. The cards come equipped with a triple slot, triple fan cooling unit with 7 heatpipes. 4 of which are 80mm and 3 of which are 60mm. The I/O configuration remains the same as reference GTX 900 series cards from Nvidia. You get one DVI-I, one HDMI and three DisplayPorts.

The cards also include a fully custom designed and built white PCB. As well as a brushed aluminum backplate. The overall aesthetic theme for the card is white with the occasional gray accents. It also carries a white LED lit "Hall Of Fame" inscription on the side of the card.

Galax did not stop there either. The company provides a voltage tool which allows for higher limits than what's normally permitted by Nvidia. The card also comes with dual BIOS so you don't have to worry too much about pushing the limits. We don't know how much of a premium Galax will charge for these cards yet. But availability should begin immediately. We have a feeling these are going to be a very popular choice for prospective Nvidia GTX 900 series buyers. And why not ? they tick all the enthusiast boxes. Great cooling, great overclocking potential, low noise and fantastic looks.

GALAX, a leading manufacturer and innovator of extreme performance gaming hardware, today announced the long awaited successors to the world renowned Hall of Fame lineage with the release of the GTX 980 HOF and GTX 970 HOF. Following in the HOF tradition, each card is factory tuned with the highest core clock in its class. The true dominance of the GALAX HOF Series cards, however, lay in their completely unbridled potential for overclocking.

Only the best of the best GeForce GPUs make the cut for HOF edition products, and GALAX has taken every possible step with their in-house designed white PCB, ultra-premium components and an incredible 7 heat-pipe triple fan cooler to ensure that overclockers’ skill and determination is the only thing standing between them and a new world record. GALAX exclusive Hyper Boost technology acts like a hardware turbocharger, increasing the maximum power delivered to the GPU with the push of a button. Dual BIOS further simplifies the tweaking process by enabling risk-free firmware updates and customization.