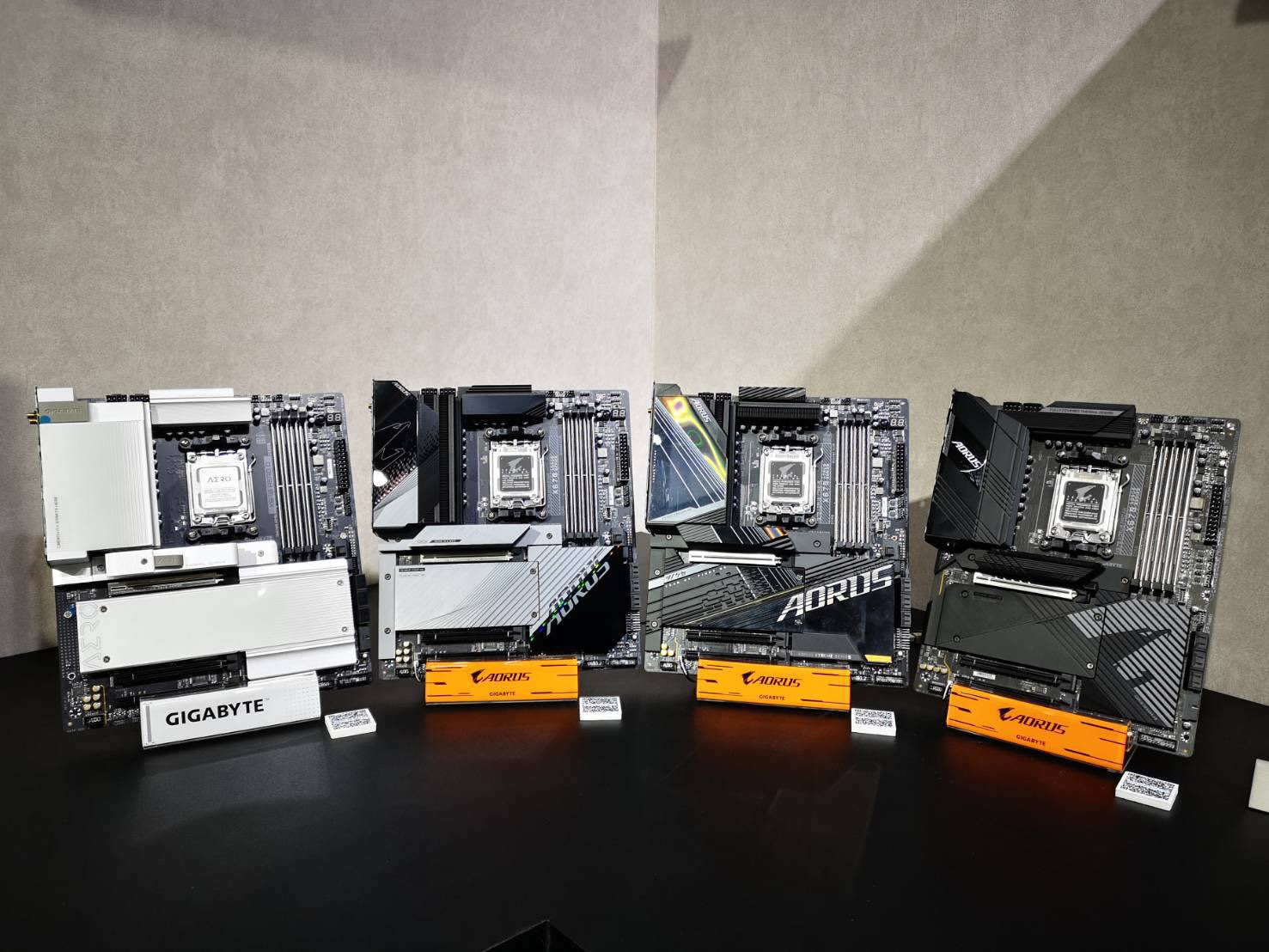 Gigabyte's X670E & X670 motherboard lineup was unveiled earlier today with the company showcasing four of its motherboards for AMD's Ryzen 7000 Desktop CPUs. TechPowerUP managed to get a close-up look at the motherboards and even got detailed information regarding the specifications and more importantly, the prices we expect from the upcoming lineup.

The lineup that Gigabyte unveiled includes both three AORUS and a single AERO motherboard. The motherboards do show the 'X670' label but it is stated that these are early designs prior to the AMD X670E spec update. We have been told by other manufacturers that X670E chipset specs had been shared with board partners very recently so it looks like some board makers were not prepared to showcase their final designs at Computex 2022. Despite that, the Gigabyte motherboards that are shown will come in X670E flavors like all of the other high-end AM5 motherboards in the wild out there.

So starting with the lineup, there's the flagship X670E AORUS Xtreme followed by the X670E Master and the X670 AORUS PRO AX. There's also the single X670(E) AERO D motherboard in Gigabyte's portfolio. Do note that this is just the initial set of motherboards that Gigabyte planned to showcase during the event. There will be several other motherboards from each manufacturer that are yet to be unveiled. The same goes for MSI, ASRock, Biostar and ASUS.

The Gigabyte X670E AORUS Xtreme will be the first AM5 flagship from the manufacturer, featuring the AM5 (LGA 1718) socket and an 18 Phase (105A) power delivery that will deliver juice to the AMD Ryzen 7000 Desktop CPUs. The motherboard features dual 8-pin connectors and a 24-pin ATX plug while next to the socket are four DDR5 DIMM slots that feature EXPO (Ryzen Extended Profiles For Overclocking) support and will support up to 128 GB capacities.

The motherboard comes with 6 SATA III ports, large aluminum fin stacks covering the VRMs, and an all-heatsink shroud for the M.2 slots plus the PCH. There's also a Marvell AQC113C chip controller that is routed through a PCIe 4.0 interface for 10 GbE Ethernet LAN along with a huge variety of I/O on the backplate which includes Q-Flash Plus and Clear CMOS buttons. There are at least 10 USB Gen 2 ports plus HDMI/DP ports for the RDNA 2 iGPU.

The AORUS X670E Xtreme motherboard is said to target a price point lower than the current X570 AORUS Xtreme at around $500 US.

Moving to the Gigabyte X670E AORUS Master, this is among Gigabyte's best-selling high-end series which offers a balance between pricing and enthusiast-class features. The VRM is laid out in a 16+2+2 (105A) power delivery that is powered by dual 8-pin connectors. The Aluminum Fin-Array stack covers the VRMs and just like the Xtreme, the motherboard comes in an E-ATX form factor.

In terms of I/O, the motherboard is equipped with three PCIe x16 slots (1x Gen 5 x16, 2x Gen 4 x 4) and a total of three PCIe Gen 5.0 M.2 slots. Storage options include six SATA III ports and aesthetics look great as ever with a more industrial approach this time around with a black and metal finish on the heatsinks. There are 12 USB (10 Gen 2) ports on the back along with a 2.5 GbE Ethernet LAN connector. Unfortunately, the addition of a third Gen 5 M.2 port means that you won't get USB 4.0 on this motherboard. Pricing is said to be similar to the X570S AORUS Master at around $360 US & which should make this board a go-to option for several high-end Ryzen 7000 PC builders.

The Gigabyte X670 AORUS PRO AX motherboard is the step-in to the X670 family and aims to be priced at around $300 US. The motherboard will feature a 16+2+2 (90A) power delivery powered by a dual 8-pin connector design. Unlike the other two high-end options which feature a fin-heatsink design, the PRO AX comes with a standard aluminum heatsink which still provides full coverage for cooling.

Lastly, there's the Gigabyte X670(E) AERO D motherboard which should come slightly above the $400 US mark. The motherboard has lots of similarities with the AORUS Master but trades a Gen 5 M.2 slot with the ASMedia ASM4242 USB4 host controller which provides two USB 4 ports on the rear I/O plate. 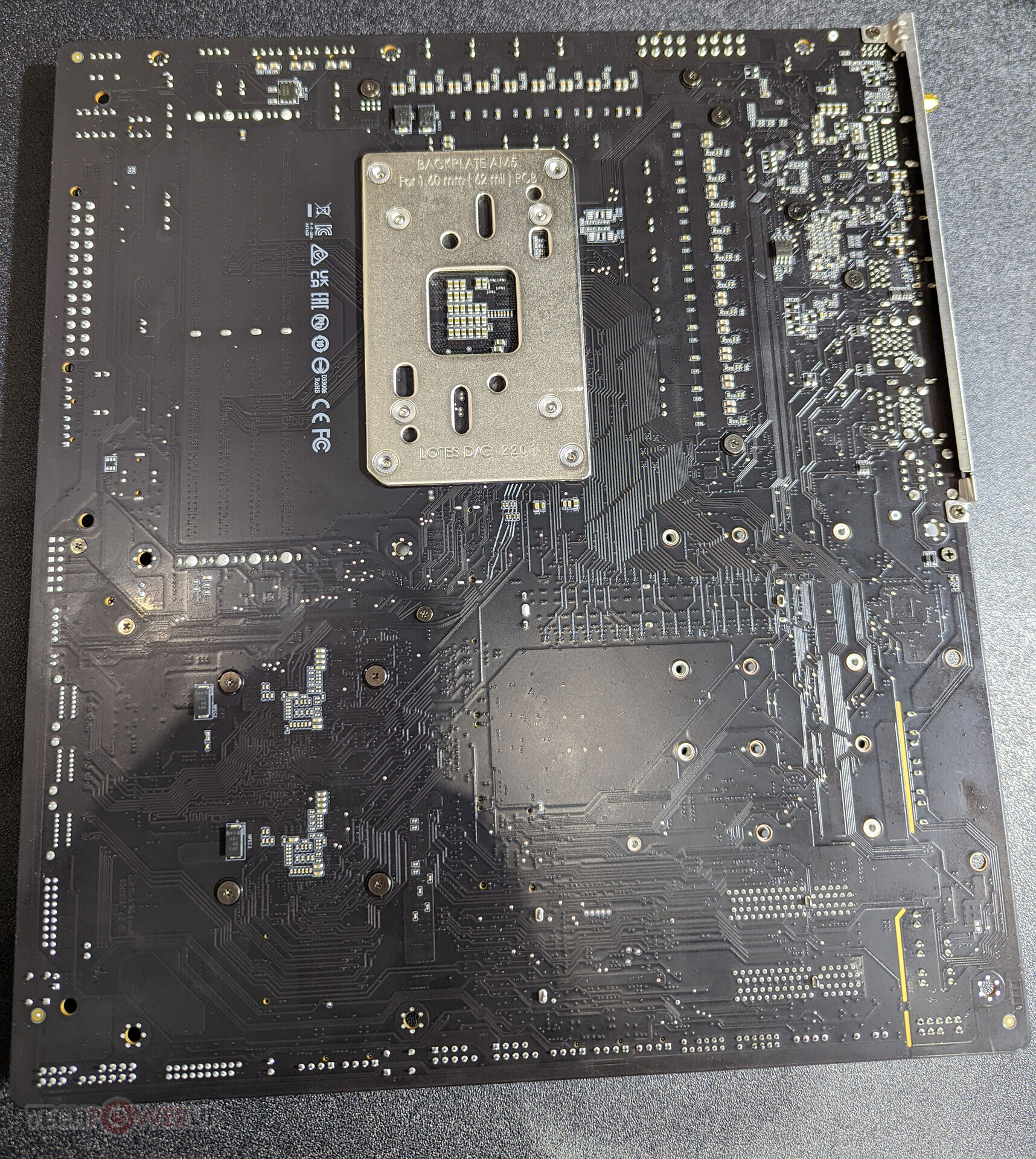 A rear shot of the motherboard shows the two X670(E) chipsets located right beneath the circuitry for the DDR5 DIMMs. These are two independent chipsets rather than a single substrate featuring two PCH dies. Cooling is provided by the same PCH heatsink that has a chunky aluminum body.

The Gigabyte & AORUS 600-series motherboard lineup is expected to launch this fall alongside AMD's Ryzen 7000 Desktop CPUs, more on that here.