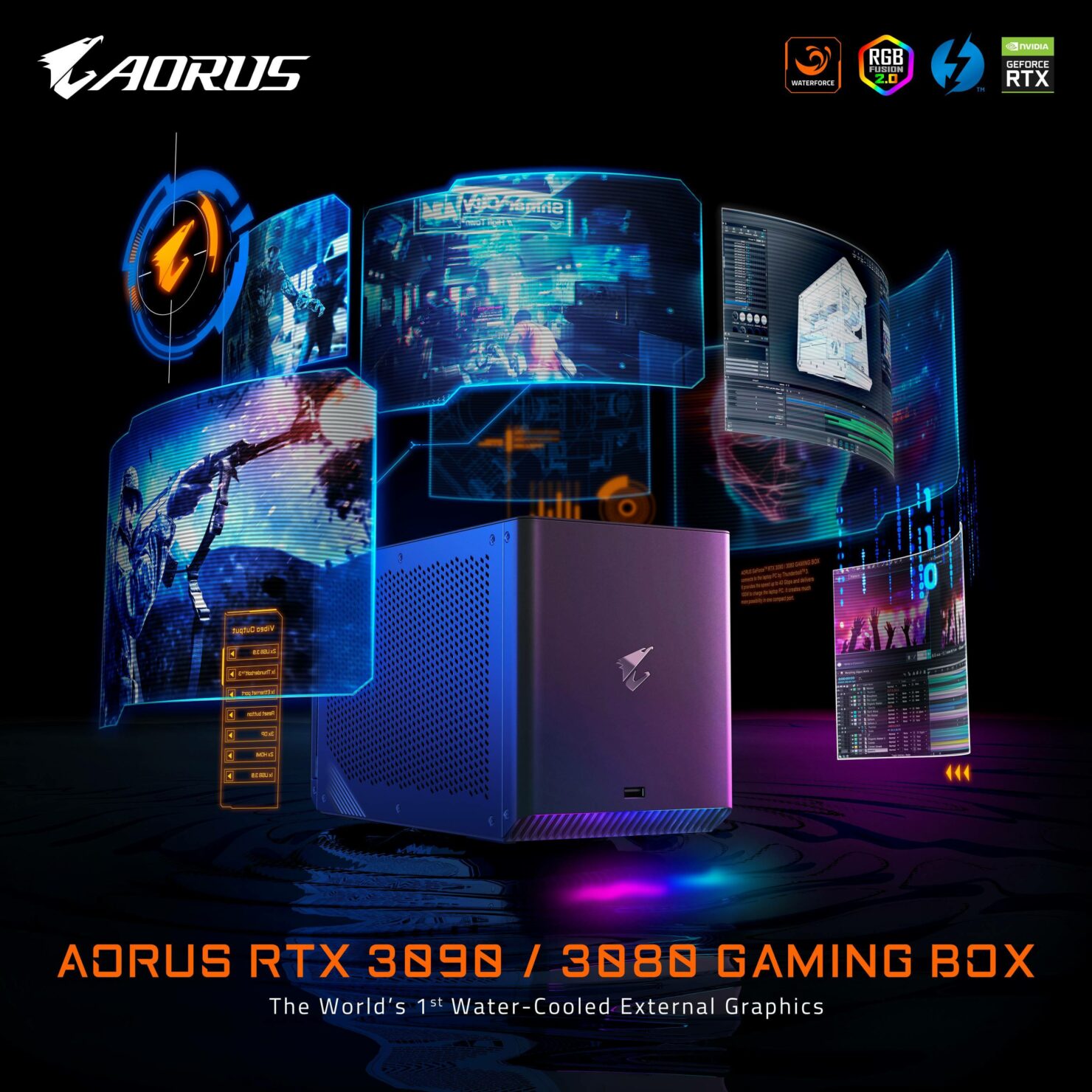 Many laptop users do not have a built-in graphics card but may need the extra power it provides for specific applications. Across the market, there are a decent amount of options for external graphics, but no rival Gigabyte's newest offering. Gigabyte has announced the AORUS RTX 3090/3080 GAMING BOX featuring the latest and most powerful graphics cards from NVIDIA: the GeForce RTX 3090/3080 graphics card based on the Ampere architecture. The AORUS GAMING BOX possesses the power necessary to upgrade any Ultrabook or regular laptop to a full-on gaming system while it is plugged in.

The AORUS RTX 3090/3080 GAMING BOX debuts a built-in all-in-one water cooling system. This is the first time ever that an external graphics box features a water cooling system. It features the AORUS WATERFORCE cooling system which allows for great performance in a compact form factor. It features an optimized pump and water block with a large copper plate, it provides the most efficient water flow and cooling performance at a lower noise level. Not only does it cool the GPU, but it also cools the VRAM and MOSFET to ensure a longer lifespan. The all-around cooling solution that Gigabyte has brought features a 240mm aluminum radiator with two 120mm fans all in a compact form factor.

On top of the superb cooling, it features the Thunderbolt 3 high-speed transmission interface for the best in class connectivity. This allows gamers and creatives alike to transfer the power of a full-sized system into an Ultrabook with no downside. Gamers can now play games with RTX enabled on an Ultrabook, something never seen before. Connection won't be an issue either with a built-in network chip. Creators using an Ultrabook can also harness the power and perform tasks normally done on a PC such as video editing, rendering, and much more. For all those who like RGB, the AORUS GAMING BOX features a little RGB lighting controlled through the AORUS engine and RGB Fusion 2.0.

The AORUS RTX 3090/3080 GAMING BOX is one of the most impressive external graphics solution with AORUS WATERFORCE cooling and Thunderbolt 3, but it definitely won't come cheap. Those looking to purchase it are looking at a high price, but some may overlook the price and see it as a solution to their current problems.