AMD has a surprise for Radeon fans today as they are significantly dropping the price on their Radeon R9 Nano graphics card. Launched back in September 2015, the Radeon R9 Nano was a surprisingly powerful graphics card given its small form factor design but came at a pretty hefty price of $649 US. Regardless, it became a successful card in the SFF (Small Form Factor) niche it was geared at and months later, AMD has decided to give it a massive price cut. 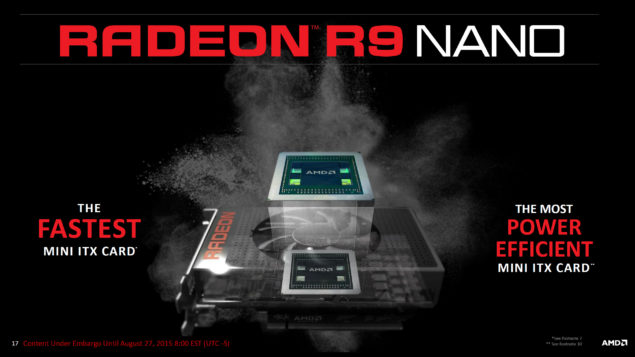 The AMD Radeon R9 Nano was one of the first card of its kind, packing a flagship graphics core on a small package. The only competition it had up till now is the GeForce GTX 970 M-ITX and we have not seen any other competition with the same form factor taking up the fight against Nano. In a way, it's original price was justified given the fact that it rocked a full Fiji XT graphics core and a design that the competition has been unable to match but users still wanted the card to be priced lower than it's original MSRP. The time has finally come and Nano is now available, cheaper than ever. In fact, the $499 US pricing brings the R9 Nano in the same price segment as the Radeon R9 Fury. The difference is that the Radeon R9 Fury is a cut down Fiji graphics card while the Nano features a full Fiji chip.

As of today, 11 January, this small card will have an even bigger impact on gamers around the world as AMD announces a change in the AMD Radeon R9 Nano graphics card’s SEP from $649 to $499. At the new price, the AMD Radeon R9 Nano graphics card will be more accessible than ever before, delivering incredible performance and leading technologies, with unbelievable efficiency in an astoundingly small form factor that puts it in a class all of its own. via AMD

The $499 US can change the market entirely with the R9 Nano being about as fast as the Radeon R9 Fury. The Nano packs the Fiji XT GPU core that is based on the 28nm HPX process and incorporates 64 CUs that round up to 4096 stream processors, 256 texture mapping units and 64 raster operation units. The Nano comes with a dynamic clocking system that can make the card run up to 1000 MHz but only in some certain conditions while normal frequency usually ranges around 800-900 MHz. This maintains the high efficiency that Nano was widely marketed with and gives the card a leverage over its beefier Fury siblings. The card packs 4 GB of HBM memory that is clocked at 500 MHz and operating along a 4096-bit bus to provide the total 512 GB/s bandwidth. The Nano has a TDP of 175W which is close to the GM204 based GTX 980 from NVIDIA.

One of the major reasons that the Radeon R9 Nano became a threat to itself was its pricing but with that being fixed and the price being better than ever, the Radeon R9 Nano can become a threat to the Radeon Fury and the GeForce GTX 980. The GTX 980 overclock models are a plenty and can boost well compared against the R9 Nano and retail for around $499 US but the performance is very close when comparing the reference models.

The Radeon R9 Fury on the other hand only comes in non-reference models and the only advantage it has over the Nano is better overclocking support but the performance is albeit the same. Now the choice seems to be very clear, users with heavy ATX rigs might eye the Fury as more suitable for them while the users building M-ITX rigs will find the $499 Nano as the fastest option they can find in the market. 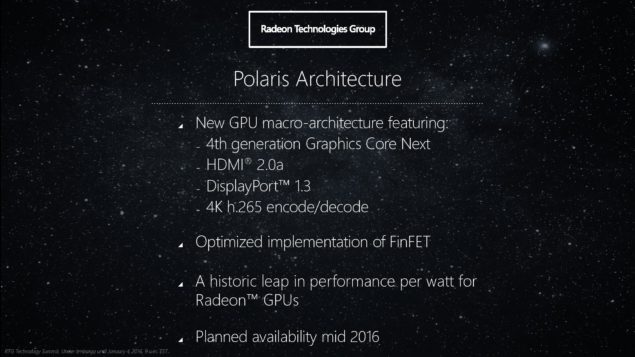 The announcement of the price cuts come just a few days after AMD demonstrated their next-gen Polaris GPU architecture at CES 2016.  While AMD made feats with efficiency on the Radeon R9 Nano graphics card, they are touting Polaris to be a significant 2.5x efficient then their Fiji based (GCN 3.0) cards. Polaris will be the first graphics architecture to be made using Global Foundries 14nm FinFET process and will deliver one of the biggest performance and efficiency numbers we have seen from AMD graphics cards.

The new team at RTG (Radeon Technologies Group) is working really hard to make Polaris their best graphics solution for both desktop and mobility fronts. In 2016, we will see Polaris going head to head with NVIDIA's own 16nm FinFET (TSMC) based Pascal graphics card which are also expected to deliver an historical leap in energy and performance numbers.