Gigabyte has unleashed their most powerful GeForce GTX 1080 graphics card in the consumer market, the GeForce GTX 1080 Xtreme Gaming Water Cooling. The latest graphics card from Gigabyte is the pinnacle in craftsmanship coming from Gigabyte as the card is built to deliver the best possible performance with the extreme overclocking capabilities on a board that is fully liquid cooled.

The Gigabyte GeForce GTX 1080 Xtreme Gaming is a behemoth with impressive PCB and Cooling.

The Gigabyte GeForce GTX 1080 Xtreme Gaming Water Cooling as the name suggests might sound like a regular GTX 1080 slapped with a water block however that's not the case. The latest card from Gigabyte is a GTX 1080 that has been pumped up to the max with a monstrous PCB that is fitted with top of the line components. The PCB features Titan-X grade chokes and capacitors, dust resistant, moisture resistant and corrosion resistant PCB coating and a 12+2 phase VRM that uses Ultra Durable class components for extreme durability and overclocks. 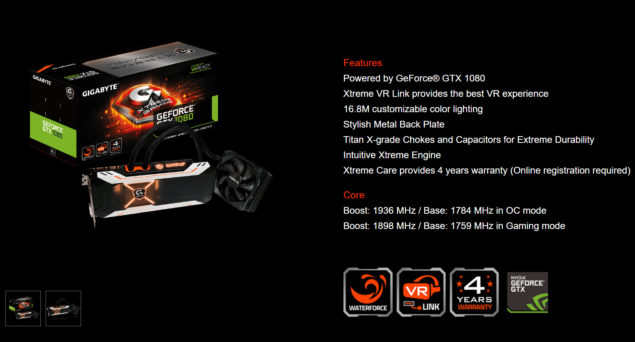 Alright so we know the features of the high-end PCB but what's inside the GPU? The Gigabyte GTX 1080 Xtreme Gaming Water cooling packs the full GP104 GPU core that is configured for the GTX 1080 cards. We are looking at 2560 CUDA cores clocked at up to 1936 MHz boost clocks with the factory shipped overclock mode. The card also comes with 8 GB of GDDR5X memory which is clocked at 10416 MHz or 10.4 GHz. This leads to a total band width of 333.4 GB/s compared to 320 GB/s on the reference models. Following are some of the details for the cards as mentioned on Gigabyte's official webpage:

Moving to the design, the card has a big cooler shroud that extends the length of the PCB. The cooler shroud houses the AIO liquid block which leads to a 120mm radiator block. The new design scheme of Gigabyte Xtreme gaming cards looks excellent with orange LEDs on the front and side of the shrouds. A clear cut windows will be displaying the GPU block which leads to great aesthetics. 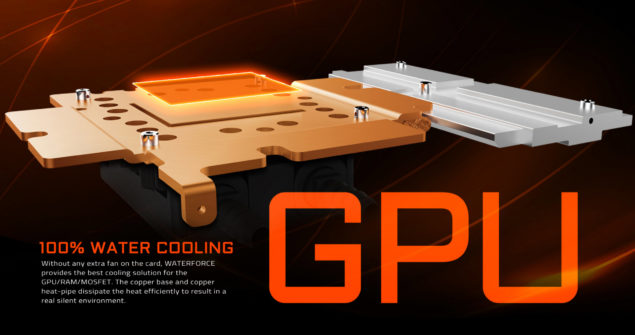 Gigabyte has deplyoyed their waterforce channel system that uses a full length water block to channel air along the GPU, VRAM and MOSFETs. This leads  to significantly better temperatures than reference or air cooled cards. The radiator is a 120mm black aluminum solution that dissipates heat effectively and channels water to the GPU block using braided FEP tubes that offer high thermal stability and high pressure tolerance. The card also comes with a metal black plate that adds to the looks of the card.

The Gigabyte GeForce GTX 1080 is not only built for extreme overclocks but it has also been designed to feature the best VR support. Aside from the three DP 1.4, single HDMI 2.0b and DVI-D connectors on the display output panel, the card comes with two additional HDMI ports which can be used to connect a front panel VR connector internally. The card offers support of up to 8K resolution at 60 Hz which is impressive and drives VR gaming with ease for high-performance gaming applications. There's no word on availability or pricing of the product but we expect this card to hit the market at a hefty price around $749 US.