Ghost of Tsushima Has Only One Ending, Decapitation and Body Part Targeting Not Possible

Earlier this month we finally got a glimpse of some real open-world Ghost of Tsushima gameplay footage, and while the game is looking pretty impressive, some folks still have questions. Well, developer Sucker Punch just provided some new answers to some of the questions they’ve been getting on Twitter – we’ve heard about some of this stuff before, but we also get new details about GoT’s story, weapons, violence, approach to difficulty, and more. I’ve picked out some of the more interesting answers, below.

Regarding the story, we’ve already heard that your approach to combat won’t affect how things unfold, and now Sucker Punch has confirmed there won’t be any sort of multiple endings.

There is no karma system. There’s one story we’re telling here, one journey for Jin. [...] The game tells the story about Jin’s sacrifice to become the Ghost. Players can choose to primarily fight with a sword, bow or stealth -- either way Jin becomes a legend to the people of Tsushima, and a terror to the Mongol Invaders.

And yes, Jin is the only character you play as.

Jin is the hero of this story. Players are there, each step of the way, guiding Jin as he transforms from the honorable Samurai he was brought up to be, into the Ghost that Tsushima needs him to become.

As for combat, don’t expect to gain any new weapons as you progress. Instead, the focus will be on upgrading your abilities with your standard katana and bow.

Jin’s katana is a family heirloom and will be with him from the beginning to the end. As a lethal samurai, this is his main weapon in fighting against the invaders. The Sakai blade is something that will grow with Jin throughout his journey.  As Jin grows into becoming this feared samurai warrior known as the Ghost, so too will some of his abilities and tactics. Learn to use a bow for picking off enemies at a distance or use throwable kunai and smoke-bombs at close proximity. We won’t share all of these abilities before launch, we’d like to have something for players to discover. 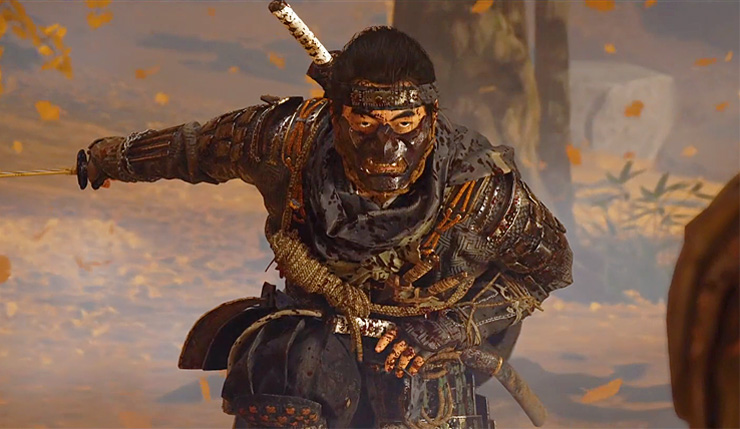 Sounds like a more realistic approach – most samurai weren’t changing out their swords every five minutes. Speaking of realism, while GoT will be violent, don’t expect crazy Quentin-Tarantino-style bloodshed. When asked about decapitations, Sucker Punch said there would be no body targeting, implying you won’t be able to chop stuff off…

Players won’t be able to target specific body parts, Jin’s goal is just to dispatch his enemies as quickly as possible with whatever means available. Our motto for Ghost’s combat is “Mud, Blood and Steel”; it’s gritty, visceral, and above all lethal. It doesn’t take many slashes with katana to kill an enemy, just like it doesn’t take many hits from a Mongol’s sword to kill Jin. It’s a challenging environment to stay alive in — use every weapon you have.

On the subject of difficulty, we already know will have multiple settings which can “wreck you” if you want, but SP provided a few more details about how it will work. Playing on Hard will require tighter timing and more advanced techniques, but enemies won’t have their health increased.

The game does feature three levels of difficulty — Easy, Normal, and Hard. On Hard, the game is fair, but very challenging. Mongols are more aggressive, and players must be precise to pull off extraordinary moves. By comparison, East is for players who want to explore the island, enjoy the story and still be occasionally tested by a worthy opponent. No matter the difficulty we never increase the health of enemies; this is to maintain the lethality of the katana. Our combat is all about the player’s skill.

Jin gets around Tsushima on his trusty horse and his own two legs, he can’t swim out to boats and start sailing on them.

If you’ve got a few minutes to spare, I suggest you check out the full Ghost of Tsushima Q&A, as more subjects than we can cover here are addressed.

Ghost of Tsushima sneaks onto PS4 on July 17. What do you think? Does is sound like Sucker Punch is taking the right approach with the game?