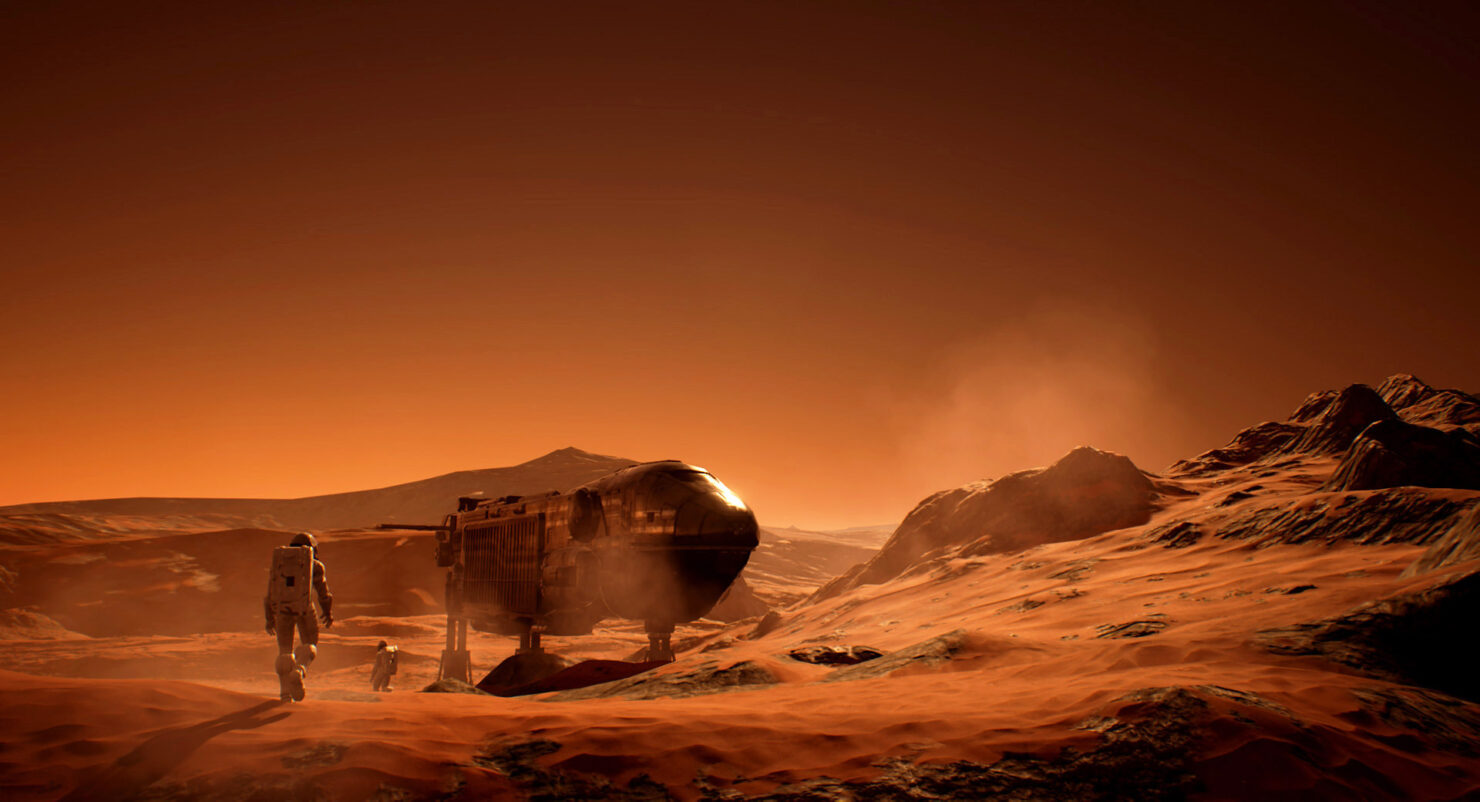 Team 17 had a fantastic showing at EGX. There are two other games that I'll be writing about later today or over the next day or two. For now, I want to talk about Genesis Alpha One. This game was the highlight of Team 17's showing and one of the highlights of EGX as a whole for me. More impressive is that it's barely in its alpha stages and still manages to be great.

Developed by Radiation Blue, a team with experience from Hitman: Blood Money and Spec Ops: The Line, Genesis Alpha One is definitely something to watch. Featuring a strange blend of shipbuilding and first person shooter gameplay, with roguelike elements, it’s an interesting amalgamation. You're tasked with saving humanity. Earth has been ravaged by countless wars and the exploitation of its natural resources. Pollution has ravaged the world and you are one of the four major corporations, backed by Earth's governments, to start a genesis project. 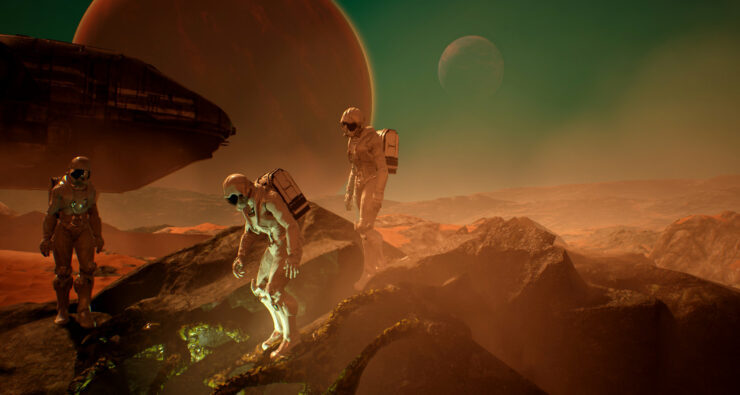 As you venture through the depths of space you will have to build and develop your ship. Collect resources that you'll use in the repair and building of your ship, as well as the uncovering of new technologies to unlock new sections for what is effectively a space bound Noah's Ark. Furthermore, the use of technology will also allow you to develop and build on the genetic structure of humanity.

Of course, it's never as simple as things first sound. As you explore space for a new planet, each time in a randomly generated galaxy, for humanity to live on you'll encounter a host of problems. The first problem is a lack of resources, this is solved by sending out a dropship manned by members of your crew in search of resources and new technology. In addition to this, there is also the chance of finding artefacts and weapons during your expeditions.

But if only it was that simple. Sending your crew to planets comes with a giant risk: stowaways. Everything from strange gaseous clouds to spores and full-blown alien invaders can, and will, latch onto and invade your ship. This leads directly into the first person shooter aspect of the game. Sadly, you are seemingly the only one capable of fighting away the intruders before they eventually destroy everything you're working towards. From experience, this isn't as easy as you would think.

The problem is that they are insidious in the way they permeate through every gap. It turns into something from a horror movie as you have to creep through the crawlspace beneath the walkways of your ship. Goody residue and alien eggs, horrible face-crab or tendrilly creatures bursting forward and attacking you. All of this while elsewhere in your ship a crew member dies, the red text flashing up on your screen. 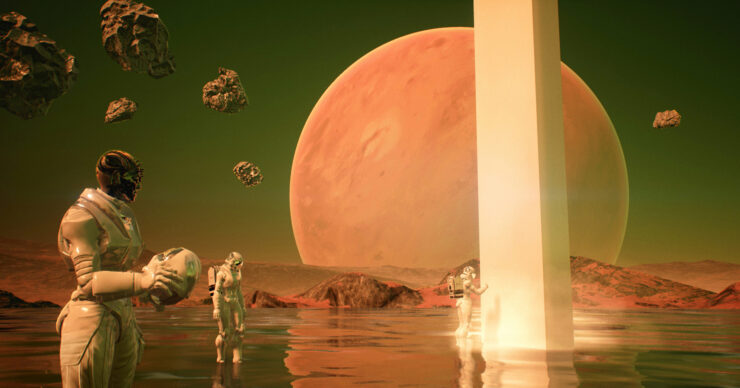 Killing these Aliens does have the chance of them dropping DNA. This is one of the more interesting features of Genesis Alpha One. Your travels to find a new home and the rebuilding of humanity relies on the cloning of humans, not procreation. There are time constraints and space limitations after all. You'll be able to splice in certain aspects of alien DNA with the Human genome. This will allow you to add in specific traits that you think are valuable. For example, an alien species has the option to cloak themselves. Splicing this in gives your crew a valuable defence against any invaders.

All of this likely makes it seem like a fight for survival. That isn't far off, and this even features in the building of your ship. Natural hazards like solar flares, asteroids and more can be encountered in your travels. To protect against these you're going to want to have shields. You'll need a hyperdrive or two to head from sector to sector. These areas don't run on their own either. You need to assign your crew to have an area work optimally. This means you'll need an ever-growing crew, which needs living quarters. Plus you need the storage space for the resources you collect, a refinery to refine them and a manufacturing station to use them.

Essentially, you're building a flying city with all of the requirements you're used to in other building games. As of the playable version, the ship is limited to just one level. What's impressive is that as you build your ship, which is a quick and easy process, you can literally just look out of the window and see the pieces. A number of games simply give you the illusion of being in something, never letting you actually see the size and scope. Here, you can see everything and go everywhere. 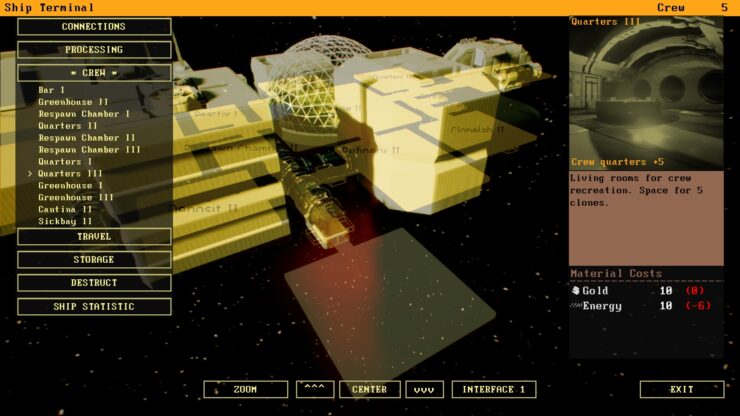 While playing Genesis Alpha One at EGX I failed miserably. After fighting off a swarm of alien crab creatures I painted my spaceship a lovely red colour. In my mind, I was hiding the blood of my crew that had been killed. I decided it was time to head off to a new sector. Built a hyperdrive, set off and dropped right into the middle of an asteroid field.

It did let me explore how you repair your ship on the go and also the devastation losing part of your ship can do. The Greenhouse was gone, the atmosphere was dropping, people dying. I had to do a spacewalk of sorts through the floating wreckage of a corridor that remained. I wandered out into space and made it to my bridge, jumping between floating pieces of walkway. Deciding to head back to see what I could salvage, I failed as more areas were destroyed in front of my eyes. I attempted another leap. I failed and drifted into the endless reaches of space and died.

Being a roguelike game, I was told that when released anything you've found in one game will carry over to the next. It has yet to be decided how, exactly, this will be implemented. Do you need to survive for it to carry over, or will it just carry over regardless? Also, it should be mentioned that you only fail when all of your crew are dead, always taking over a surviving crew member until eventual annihilation. There are other features still to be implemented, like building your ship both vertically as well as horizontally. Eventually, you'll be creating a behemoth the size of the Galactica, or bigger. 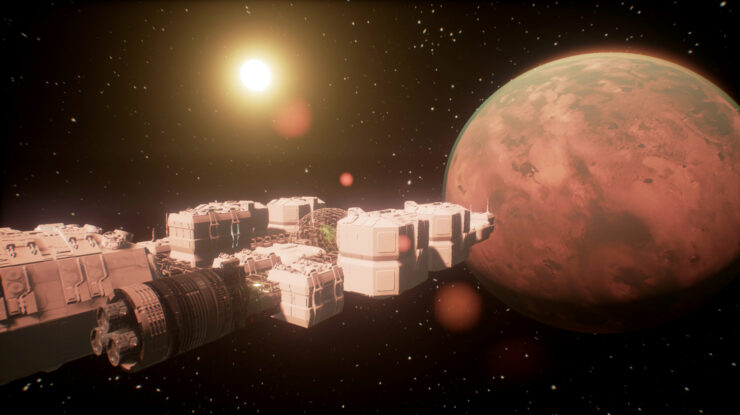 I have to reiterate that Genesis Alpha One is only in a very early alpha stage. Despite this, I was genuinely enthralled in the 30+ minutes I spent with the game. The build I played had some bugs and issues, but this is a game that shows such great promise and potential that I'd love to play it some more right now. As one of my top three games of EGX 2017, I simply can't wait for it to be released next year. There'll be no early access either, but only a full release on the PC, PS4 and Xbox one with a host of features that will keep you coming back for more.

Meanwhile, you can check out below a recording of Genesis Alpha One's live Twitch demonstration at EGX.