Yooka-Laylee and the Impossible Lair

Platform games have always been popular since the dawn of video games, but they started getting away from the spotlight a few years back when only Nintendo and a few other publishers could release games that managed to sell as much as they did during the golden age. Rare was one of the studios that managed to make platform games so popular in the 16-bit era, thanks to the Donkey Kong Country games, but the team eventually branched out, developing other excellent games but seemingly leaving platform games behind.

Some of the members of the studio, however, never forgot about the games that put them on players' radars, and so brought back the experience that made them so loved by founding Playtonic and releasing Yooka-Laylee. While the game isn't particularly innovative, it's a solid 3D platform game that is extremely enjoyable.

Like its predecessor, Yooka-Laylee and the Impossible Lair feels like a tribute to old platform game series, but it also introduces some very interesting tweaks that make it more than a simple tribute.

Yooka-Laylee and the Impossible Lair stars once again the dynamic duo of Yooka and Laylee as they explore a wide variety of locations to rescue Queen Phoebee's Royal Beettallion and take on Capital B's new challenge, the Impossible Lair. During the course of their journey, Yooka and Laylee will meet a cast of colorful characters that will help them in their quest to end Project B's nefarious ambitions for good.

Like in the Donkey Kong Country games and many other classic platform games, Yooka-Laylee and the Impossible Lair's story is extremely simple: everything you need to know, you get to know at the very beginning of the game. There's no major twist or anything of the sort: the story is straightforward, humorous and wacky, providing a nice backdrop for all the platforming action provided by the game, which is, obviously, the main focus.

In Yooka-Laylee and the Impossible Lair, the main goal is to conquer the Impossible Lair, which is an extremely difficult dungeon filled with dangers, traps, and fierce enemies. During the duo's first attempt, it's clear how the Beettallion is needed to conquer it, as they can protect Yooka and Laylee. but Project B had a countermeasure in place, a mind-control device that allowed him to control the bees and imprison them in several different locations that can be accessed by interacting with book pages scattered all over the map. The Impossible Lair is available from the very beginning, and can be completed at any time even without the Beettallion, but don't expect it to go far without their protection.

The Donkey Kong Country influence is extremely evident in Yooka-Laylee and the Impossible Lair, from the duo's moves to the level design. Like in the classic Rare games, Yooka and Laylee must work together to complete levels, and can perform some unique maneuvers when they are together, such as a short glide, a downward crushing attack and enhanced rolling which makes some jumps less tricky. Getting hit once will make Laylee fly away, and once he is gone for good, the only way to get him back is by sounding bells that can be found throughout stages. Without Laylee, Yooka can still make it out of any stage, though he may not be able to access some of the secrets found in it. And there are quite a lot, including TWIT coins which are also required for story progression.

The presence of five TWIT coins per stage is another clear callback to the Donkey Kong Country series. These coins are well hidden inside stages and require a little bit of observation and experimentation to find. There are no hints, so players can only rely on their skills to find them. What makes finding them so fun is how they are cleverly hidden inside stages: while they are not really easy to find, most of the time, these hidden areas are implemented well into the level design, and they never feel extraneous at all.

Speaking about level design, Yooka-Laylee and the Impossible Lair's is excellent. Every stage is set in a different environment, and it's generally based around a single gimmick that is introduced at the beginning of the stage, and then is made more complex the closer the play gets to the end of the stage. These gimmicks range from raising water fountains to windmills, to sawmills and so on. No gimmick is ever repeated in the around 50 stages included in the game, not counting their inclusion in the Impossible Lair, so variety is extremely high.

Another very creative way used to make stages feel even more varied are variations, which are triggered in the game's unique overworld. These variations add another gimmick on top of the stage's original gimmick, so players may end up having to deal with more monsters than usual, frozen water fountains and so on. These variation stages, needless to say, are just as good as the regular stages are, and they are a clever way to re-utilize stages while offering different experiences and gimmicks.

The Yooka-Laylee and the Impossible Lair platforming experience, while well-crafted, isn't particularly original. The way stages are accessed is, on the other hand, quite unusual, for a platform game. The overworld in Yooka-Laylee and the Impossible Lair is not the basic map seen in many other 2.5D platform games, but a fully explorable map filled with secrets and optional content that feels very similar to The Legend of Zelda 2D games.

Shortly after the tutorial stage, players can explore this unique overworld map to access stages and search for secrets. Many of the stages cannot be reached in a straight-forward way, but require players to search for alternate paths and complete some rather simple quests which often involve bringing items from one location to the other. The berries, in particular, can not only be used to clear the path, but also to bring about those stage variations we mentioned earlier. This leads to a lot of experimentation that makes this overworld map feel like a game inside the game. Exploring thoroughly doesn't just unlock new variations, but also Tonics, which have appeared in the original Yooka-Laylee. Tonics, which can be equipped on the fly, give a variety of bonuses that make some of the stages easier, at the cost of a reduced Quill acquisition rate. Quills are used to unlock the Tonics from the dedicated menu once they have been found in the overworld map, so players need to strike a good balance to unlock them all without having to play through levels several times to grind.

Despite the map feeling somewhat open, it really isn't, as there are not only some challenge stages that must be completed to open up paths but also gates that prevent players from moving to the next area if they haven't gathered enough TWIT coins. This interplay between the regular stages and overworld works quite well and gives off an enhanced sense of adventure and shows how Playtonic wanted to do something that goes beyond simply tributing one of the best platform game series ever.

Yooka-Laylee and the Impossible Lair also excels in its presentation. The game looks incredibly good, with vibrant colors and detailed character models that make it almost feel like a Pixar animated movie. Performance is also excellent, with the game running at a steady 60 FPS on a PC featuring an i7-3770 CPU, NVIDIA GTX 980 Ti GPU and 16 GB RAM. There are no settings to tweak in the PC version, outside of simple presets, but the game is not that demanding so it should run well even on less-powerful machines. The soundtrack is also excellent, with so many memorable tunes that make the journey to conquer the Impossible Lair even more engaging.

Yooka-Laylee and the Impossible Lair is an extremely enjoyable 2.5D platform game that features a familiar experience and some very interesting ideas for the overworld map. The game by Playtonic is far from being the most innovative platform game around, but when the game is so much fun, does it really matter? 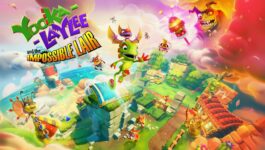 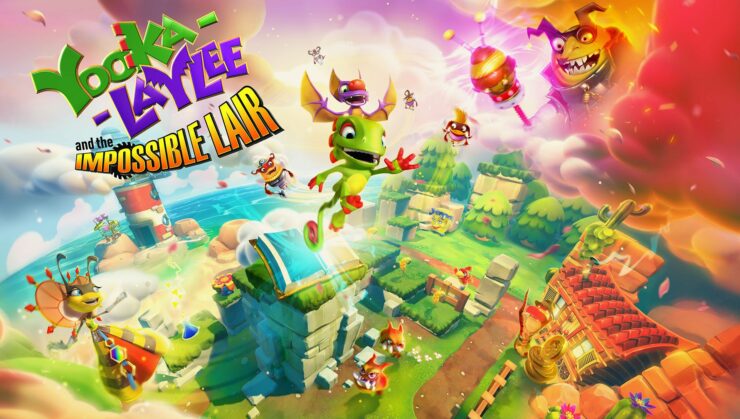 Yooka-Laylee and the Impossible Lair is a very good 2.5D platform featuring a familiar experience heavily inspired by the Donkey Kong Country series and some interesting mechanics for the overworld map which deepen and expand the experience. While the game is not innovative in any way, it's an extremely enjoyable experience that no fan of platform games should pass on.