As you probably know by now, Green's earning call took place recently and though they stepped aside direct questions they did drop a couple of well wrapped hints at the call that I will now report on (and attempt to decipher). I will also jog the memory of our readers a bit by pointing out some very important (and authentic) data that is already present on future Nvidia Geforce GPUs. 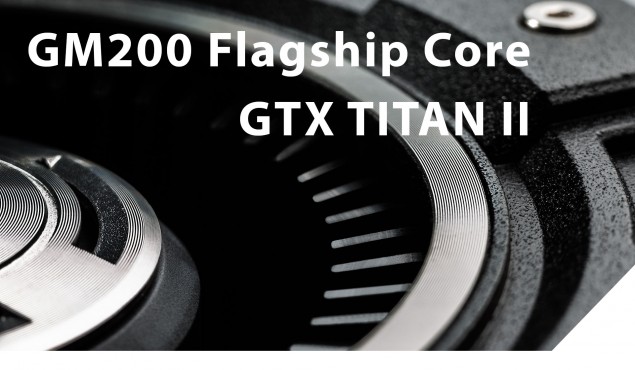 The name GTX Titan II is not confirmed and is just a place holder.

Most of the guys I have had the pleasure of working with had the following to say when I asked them when they would be upgrading their rigs: "(we are) waiting for 20nm GPUs". But what happens, if there arent any 20nm GPUs coming at all and instead we are shifting to 16nm after a long wait? Mostly, things will get surreal very fast, with Nvidia acting like the resident cash cow and milking away on the 28nm node. But before we go on any further, here is a quote from the transcript:

Q: Are you going to skip 20 nanometer and go straight to FinFET?

And: We haven’t announced our next generation products yet. And so we've got lot of great surprises for you guys and I'm excited about our next generation GPU. But right now we're enjoying ramping Maxwell. ..... And so Maxwell is unquestionably at this point a home run and we're just savoring the moment and ramping the living daylights out of it.

"I am excited about our next generation GPU" says Jen Hsung and I am about 99% certain he is talking about the GM200 Core or rather Big Daddy Maxwell as it is fondly called. But as you will notice he doesn't answer the question. A rather cryptic statement is given and it is here that I will point out one of the most reliable sources present in the Industry. A source, that can literally not be wrong. I am talking ofcourse about shipping data from Zauba. Said shipping data has already confirmed the taping out of GM200 INT0 and GM 200 CS samples. Meaning both the prototypes and the customer samples have already taped out.

If we look at the time it took for GM204's customer sample to tape out and appear on shelves, we will see that this timeframe has already passed for the GM200. Which leads us to two very obvious conclusions: 1) either the GM200 GPU is landing very soon, and by soon I mean within this month or the next, or 2) Nvidia is deliberately holding the GM200 chip back until AMD comes up with any competition or 970/980 sales dry up. Here's another quote:

Q: I am kind of curious from a process technology perspective. Does the trouble that Intel is having with 14 nanometer mean anything to you as you work to bring FinFET technology to market?

And: .....We’re excited about the next generation of FinFET. The way that we deal with that that, you know that we've had quite a few scars in the past as we ramped up new process technology and we’ve been better and better and better at it. And the reason why is because we have just an extraordinary team in advanced technology group working deeply with our foundry partners and ensuring through real creation of test chips and rigorous test methodologies and development methodologies that ensure that when we are ready to ramp that the processors are ready for us. And I can tell you that for the next couple of nodes, I feel pretty good about it because of that work.

Looking at what what Jen Hsung said now, his statement starts to make much more sense. And is it just me or did he hint at 20nm/16FF porting during this answer? The reason he appears very confident is because said chips are already out and waiting in the wings. Now the real question is, are they on the 28nm, 20nm or 16nm FinFET node? As to that, there is only speculation present. If you will allow me, I will present my two pence in this case. If speculation isn't your cup of tea, this is where you hop off.

Now the die size of the Gm204 chip was ~398mm^2 that would mean that, since its the same architecture, you would need an approximate die size of ~534mm^2 to get the approximate calculated yield on the 28nm node.

The GK110 is roughly 550mm^2 and the limit of TSMC is at roughly 600mm^2. So can the GM200 exist on a 28nm Node? Absolutely, yes. Will it? Well, the consumer samples taped out a long time back, and they are sure as hell not on 16nm FinFET. Recent reports seemed to indicate that TSMC has canceled plans for 20nm and while AMD can theoretically revert to Global Foundries for 20nm GPUs, Nvidia cannot. But those reports could very easily be inaccurate. It is also interesting to note that our calculation coincides easily with the latest rumor on Big Daddy Maxwell we received a while back. Needless to say that these GPUs could be ported to 16nm FinFET once its ready, since we have already heard rumblings about the same. Well, there you go folks, everything of interest that happened at the earnings call.

This editorial was derived from Nvidia's Earning Calls, a transcript of which can be found over at Seeking Alpha.