Note: Before we begin,  anything mentioned in this Editorial may or may not be fact and is educated speculation. As such, this was done just for a bit of fun and It would be best to treat this editorial on face value alone.

[Editorial] You may recall the revelation by Gigabyte's manager that the Maxwell Geforce 800 Series is landing quite soon, but you probably missed his passing comment on the fact that there are going to be new custom coolers on the PCB. That would ofcourse mean a factory overclocked GPU but maybe, the new cooler isn't going to be present just in the Gaming G1 series? Looking past at the hints there's actually a reasonable chance that Nvidia might introduce a new reference cooler design: Dual Axial Turbofans.

On May 15th of 2014 Nvidia filed a patent with the ID number US20140133082 A1. This particular patent protected a very special design, namely an Axial Turbofan. Any experienced gamer would immediately notice that this design is quite different from the blower fans Nvidia usually uses in its reference cards. Talk of this patent died after the usual hue and cry. A few days later leaked pictures of the Maxwell Geforce GTX 880 PCB surfaced where two parts in particular were blurred out. However, there was something Hassan and I noted: there appeared to be something very familiar in the blurred out portions on the right side of the PCB. The blurred out section appeared to depict two black circular objects aligned at the right edge of the PCB. Could this be the new reference cooler for the Geforce GTX 800 Series Gigabyte's Marketing Director was talking about? Since I want to make sure you guys follow me, its time to whip out my trusty old Photoshop.

Now I am working on a very low resolution because of the low quality pictures so most of the additions I make will appear blurry as well. The first thing I did was take the Nvidia core visible in the picture and start applying a Pixelate (Mosaic) filter and increasing the intensity at 1 point intervals. I did this to reverse engineer the Pixelate intensity that was used, and at a cell size of exactly 19 points my square pixelated artifacts were exactly the same size as the original pixelation. Now I learned two things for sure: 1) The intensity of the pixelate used and 2) the object is clearly circular since a square object produces a very different pattern. Armed with this very useful information, I began my experimentation. The first thing I did was open the patent and attempt to recreate the design from a top view. I ended up with a self created top view of the fan assembly and though it was nothing but a very crude imitation of the same, it will do. There is ofcourse one very major problem with this entire concept that I am sure many of you have figured out by now. Fans are usually not attached like this to the PCB and there is a separate layer between the fan assembly and PCB. However, since this is a prototype board (where anything can happen) and we are doing this for some fun anyways, I am going to ignore that.

Now I am slightly unhappy with the placement of the fans because the bottom one is on the edge of the GTX 880 PCB whileas the top one has a lot of breathing room. However, I am going to refrain myself from tampering with the placement and just go with the flow. I immediately noticed another problem with this particular arrangement. The design is supposed to push air out of all outlets and that means that 1) there is going to be pressure cancellation between the two fans and 2) air will be wasted  because some of it will be blown back and out of the card. I am not sure how this would work in a reference cooler for the Geforce 800 Series but if this is true, I am sure the peeps over at Nvidia R&D know better. I wanted to see how the pixelation pattern looked so I applied the 19 Mosaic Pixelate filter and got horrible results.

I wont bother posting that here. The problem ofcourse is that the pixelate algorithm works on the colors present in the space and there is only one here. The algorithm works by looking at the color range present in the space so manually filling in solid colors wont help either since in a real photograph, there is a very wide range of shades of the same color (thanks to lightning). The answer to this problem is actually quite simple. If i give the filter a reasonable approximation of the color space I will get a reasonable result, regardless of the object in question (the drawn fan) being quite different from its real life counter part. So I applied gradient based shading to the fans. The result was much better than last time but something was still missing, so I added a color gradient for the PCB and the inner assembly too and got the following results: 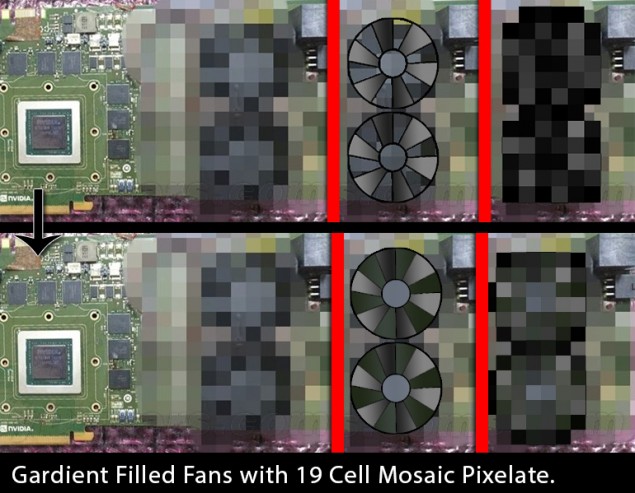 Now here's the thing. There is no way on earth I can accurately reproduce the same pattern unless I know exactly what the background Image is. This is why what I was actually looking for during this test was to get the basic pattern to match. Since I continuously used color gradients to give the algorithm the color range you would get after factoring in ambient occlusion, lightning etc, it should give the Pixelate algorithm approximately the same color range to work with.  And after adding in the last gradient, I think I have a pretty close match. If you alter the lightning a little, you should get an almost identical pattern to the one shown in the PCB shot of the Geforce 800 Series GTX 880. So what exactly have we learned? The only thing we learned for sure from our analysis are the following: A 19 Point Pixel Filter was used over a completely circular object with a black- green color space. We cannot say with 100% certainty whether these depict the new reference coolers for the Geforce 800 Series or not but I sure am tilting that way.

At the end of the day the simple fact remains that this could very easily be something else entirely. It could always be something that came out of nowhere but I don't see what else would need to be blurred out like that. It could be two ARM Cores (in a circular assembly?) or a new dedicated power supply system (in two circular and identical blocks?) but to me, those seem a bit far fetched seeing the blur pattern. Both these things could still be present on the PCB even if this does turn out to be the new reference cooler design for the Geforce 800 Maxwell GPUs. Logically speaking, the only reason I chose to do a reverse-Blur Analysis with the Fans is because there are exactly two of these instead of one.

We cater to your constant need to remain up to date on today's technology. Like us, tweet to us or +1 us, to keep up with our round the clock updates, reviews, guides and more. By Syed Muhammad Usman Pirzada