Galaxy S8 Plus is going to be announced alongside the 5.8-inch Galaxy S8, and although we got a good look at the screen size details of both phones coupled with the soft button present on the screen, the full spec sheet of the larger phablet has been leaked, showing a bunch of interesting key details about the phone.

According to the Galaxy S8 Plus specifications provided by none other than known Twitter leakster Evan Blass, the screen size of the smartphone is said to be 6.2 inches. The resolution is going to be retained at QHD and will be using Samsung’s Super AMOLED displays. The company is known to use the best smartphone displays on the planet, and it is going to be no surprise if the Galaxy S8 Plus resonates beautiful colors from its massive screen.

There is no mention of a dual-camera setup at the back side, so we’ll just be getting a single 12MP rear shooter, which we might add might feature a wider aperture than the one present on the Galaxy S7. There’s also an iris scanner provided, which we’re assuming could be positioned right next to the front-facing camera. 4GB RAM paired with 64GB of internal memory should be more than adequate to keep you from having a sluggish Android experience. We are more than certain that there’s going to be a MicroSD card slot opening provided.

Wireless charging support is also present, but you’ll have to purchase the charging pad separately, unfortunately. Nearly all smartphones come with earbuds but it looks like the accessory bundled with the Galaxy S8 Plus are going to be tuned AKG, an Austrian manufacturer of audio-related consumer goods, so here’s to hoping that they will be able to deliver clarity and high-quality sound. 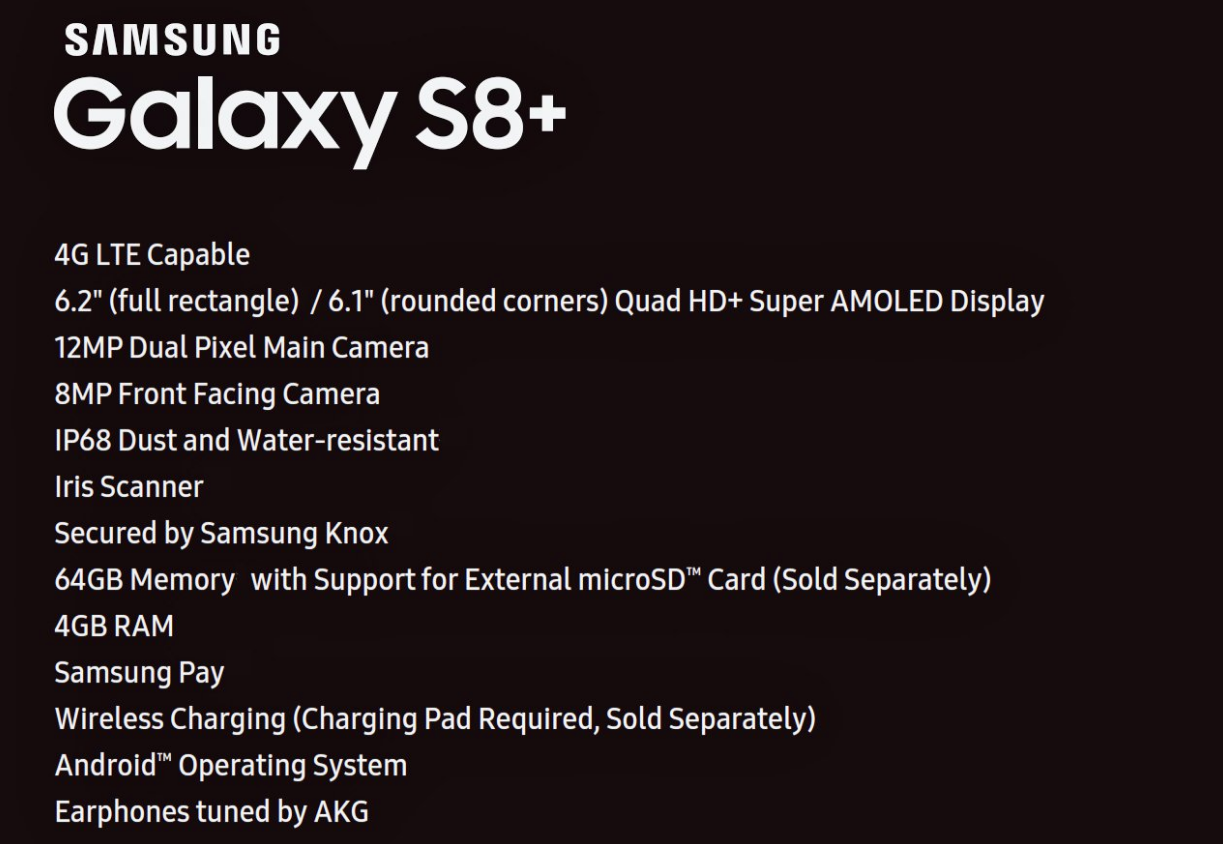 The thing that we are not pleased to hear is that the Galaxy S8 Plus will not feature a wireless charging pad. Most manufacturers often follow this route to generate more revenue by selling their accessories at high prices but Samsung could have done us this kindness. Regardless, take this spec sheet with a grain of salt for now. With the MWC 2017 trade show kicking off this week, we will know for sure the features and hardware that come with the S8 Plus and we’ll update you accordingly.