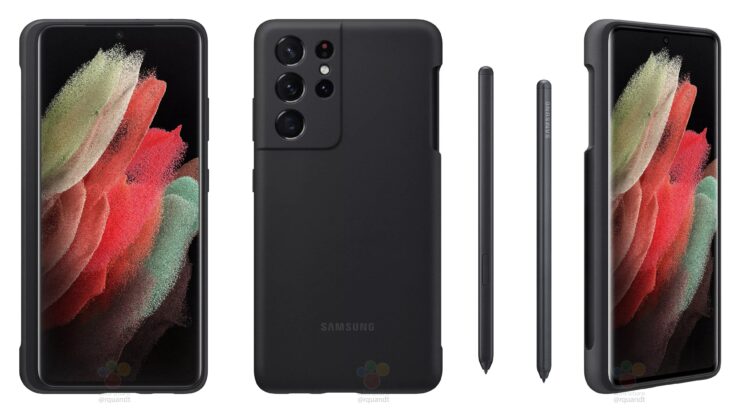 We are only 3 days away from the official unveiling of the Galaxy S21 series, and by now, we are aware of everything that the devices are going to be. The star of this is how it will be the Galaxy S21 Ultra, and that's for several reasons. Not only is it the most expensive, but it is also going to be the first Galaxy S smartphone that will have full support for the S-Pen.

However, the S-Pen will be a separate accessory and will not be housed within the phone as there is no slot. This generally means that the first and third-party case manufacturers will have to come out with their own way of ensuring that the S-Pen has a place inside the case.

The latest leak is coming from WinFuture.de, who has been graciously providing us with some fresh press renders, and this one whos the S-Pen on its own, along with how the case is going to work when it comes to housing the S-Pen, you can take a look at it below.

Now the source claims that this is the silicone cover, and we are all familiar with Samsung's rendition of these cases. Although the case itself looks good as far as the protection and looks are concerned, I really am not sure about the added width that will be coming because of the S-Pen housing. While some people might like the idea of it, the whole case makes the phone look very disproportionate. As someone who is buying the S21 Ultra, this case is a big no for me, at least. I'm looking forward to seeing what other case makers have to do as far as this situation is concerned because the official silicone case just doesn't cut it.

What do you think about this abomination of a case? Let us know.