Everyone who was following the specification leaks of Galaxy Note 5 knew that the smartphone came packing with a 3,000 mAh battery. This would have upset thousands of consumers looking to get their hands on Samsung’s flagship phablet, since the company’s previous flagship handset, Galaxy Note 4 came with a 3,220 mAh battery. However, the battery tests conducted show the most surprising results for Samsung’s newly announced smartphone.

Galaxy Note 5 Excels In Battery Life, Despite Featuring A Smaller Capacity As Compared To Galaxy Note 4

According to a source, Samsung’s Galaxy Note 5 is able to zip past all of its predecessors, which is really surprising considering that Galaxy Note 5 possesses a 3,220 mAh battery as opposed to the 3,000 mAh present on Galaxy Note 5.

Coming to the amount of battery life that the handset is able to deliver to consumers, Exynos 7420 running smartphone’s 3,000 mAh cell is able to give our 9 hours and 11 minutes of juice. In comparison, Galaxy Note 4 was only able to get powered on for 8 hours and 43 minutes. However, Galaxy Note 5 is not the smartphone that is leading from the front, because Galaxy S6 Edge Plus was able to give out 9 hours and 29 minutes before going in to hibernation mode. 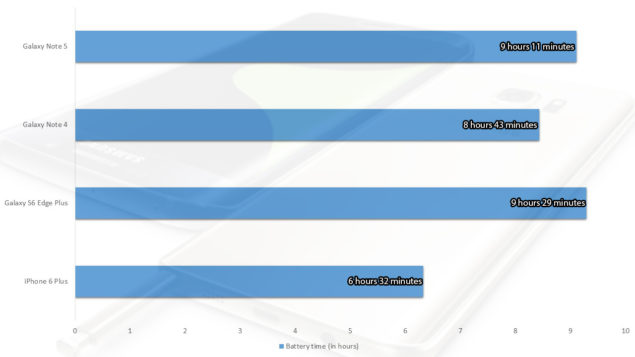 Even though iPhone 6 Plus is a previous generation flagship device from Apple, we still had to place it in the comparison table. This particular smartphone delivers the least amount of battery life (6 hours and 32 minutes), despite being incorporated with a battery pack that is only 75 mAh less than the cell that is present in Galaxy Note 5. It can safely be said that Samsung has taken huge strides in making sure that its interface not only delivers a fluid experience to users, but is also able to deliver the most amount of battery life to users.

We are confident that when iPhone 6s and iPhone 6s Plus take center stage during Apple’s conference scheduled to take place next month, we will see some huge gains from the Cupertino tech giant’s flagship duo. Till then, Galaxy Note 5 and Galaxy S6 Edge Plus have bragging rights, for the time being.