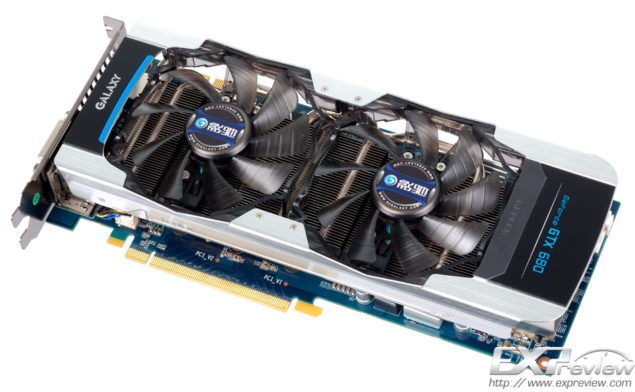 Galaxy has started working on a Non-Reference model of the GeForce GTX 680 GPU which makes use of 4GB Memory buffer, A custom designed PCB and a Dual Fan Cooler.

The model dubbed as the Galaxy GeForce GTX 680 "Gemini" would feature a 5+2 Phase VRM design controlled by the RT8802A PWM chip. The GK104 Core would run at a stock frequency of 1110MHz and 1162MHz Boost Clock. The memory comprises of Hynix H5GQ2H24MFR memory chips totaling a 4GB 256-bit wide memory buffer running at the stock 6008MHz.

The GPU is powered by an 8 Pin + 6 Pin connector placed horizontally to each other. The cooler is considerably large covering the whole length of the PCB and fitted with a large aluminum fin array block which a pure copper base through which four 6mm heatpipes convey heat and cooled by two 92mm fans, Total cooling capacity of the cooler is 250W compared to the reference 225W.

Display outputs include the reference two DVI, Single HDMI and Display Port on the rear panel, There's also Dual BIOS controller, power monitoring and power display functions on the PCB. Additional cooling for the MosFETs is also included in the form a small aluminum heatsink spreader. Pricing and release date are not yet detailed. 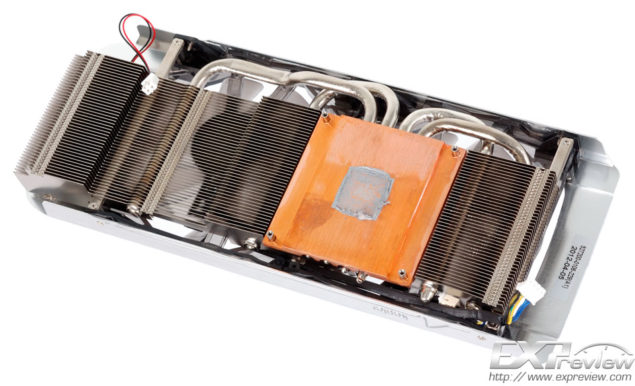