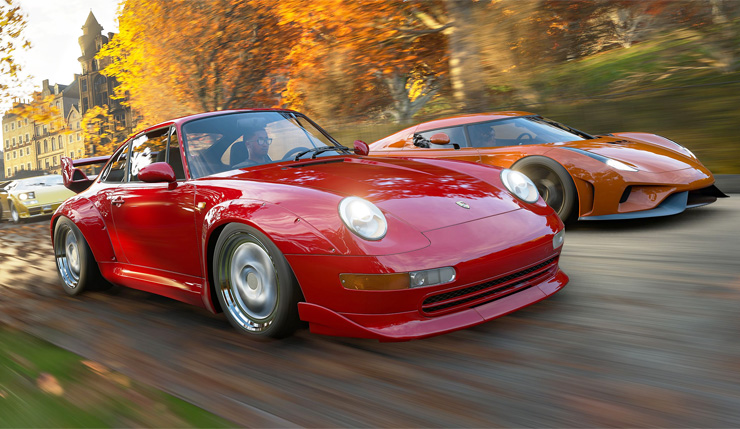 Forza Horizon 4 looks like it’s taking the open-world racing concept to the next level. In addition to seasons and a shared online world, Forza Horizon 4 is introducing Horizon Life, a new campaign that really lets players live in the game’s gorgeous world. Buy a house, take on non-racing jobs, and more! Check out the IGN First video below for more info and some new Horizon 4 footage.

"It's massive how much [Horizon Life alters the game], because it's taking that step from a festival where you spend the summer, to the dream life you want to live. Not only can you buy all the best cars in the world, but you get to buy houses, you get to do a job -- not just a [normal racing] job, but a job like a stunt driver, or driving ridiculously fast taxis around the world. You get to do everything you would ever want to do across an entire year of Horizon, and more."

According to Thaker-Fell, Horizon 4 will also eliminate a lot of the annoyances typically associated with shared open worlds.

"Random players you see, you can interact with them, you can chat with them, but they can't crash into you while you're trying to nail a drift zone. They can't push you out of a place where you're trying to take a photo. All the features you might associate with being offline, like photo mode, rewind, pausing the game, you can do all of those while connected. You can rewind with other players around you and it's all synchronized, you can pause at any point you want (midair, on the ground), and use photo mode -- the other players will be in your photos if you want them to be."

Players can also keep busy with Forzathon Live, a new series of optional online events that change every hour. But hey, if you still don’t want to play online, you can opt out with the press of a single button. Developer Playground Games seems to be serious about letting players tackle the game how they want.

What do you think? Excited for the game? I’m impressed by what I’m seeing – let’s just hope all the online stuff works at launch!