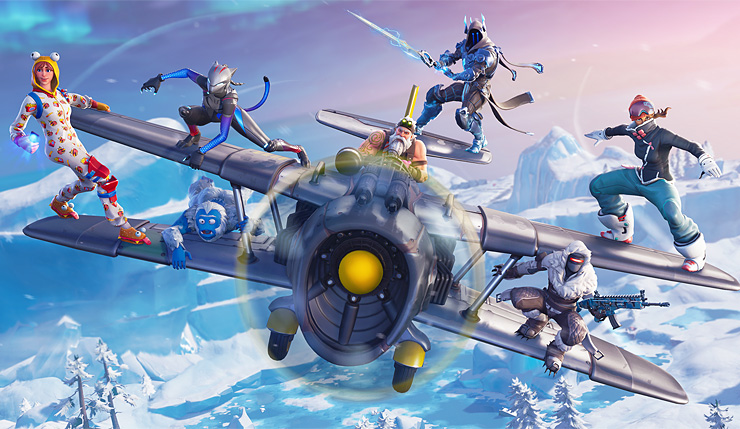 Fortnite Season 7 has arrived, and its full of presents for good little battle royalers. In addition to the new Creative mode, which we detailed yesterday, Season 7 will include the new frosty Iceberg biome, the 5-seater X-4 Stormwing plane, ziplines for getting around, and, of course, a new Battle Pass featuring various Christmasy, wintery cosmetics. You can check out cinematic trailer for Season 7, below.

And here’s a look at some of the goodies available in the new Battle Pass. This time around Epic has added “wraps” – basically, patterns you can use to customize weapons and vehicles.

Here are your Fortnite 7.0 update notes:

Note: Each new season gives us an opportunity to evaluate the current item rotation. Our goal is to have a reasonable number of items to learn, while avoiding duplicates or overlapping functionality. Based on recent (and upcoming) item additions, we've selected the following for vaulting.

This is an early release so you may experience client crashes, loss of progress, or other unexpected errors.

Fly mode allows players to quickly travel around their island and create in mid-air.

Players who are at max level will now continue to earn rewards each time they earn enough XP to level up again.

Frostbite Sniper Rifle has returned to the Weekly Store!

If you need to know about every minor bug fix, you can check out the full, unabridged patch notes here.

I’m not always a huge fan of ice-themed levels, but between the addition of Creative mode, all the new Christmasy cosmetics, and a dang plane to cruise around in, I’d say this is a pretty merry update. What are your thoughts?

Fortnite is available on PC, Xbox One, PS4, Nintendo Switch, and mobile platforms. Season 7 is available now – the battle pass costs 950 V-bucks, or around $10.