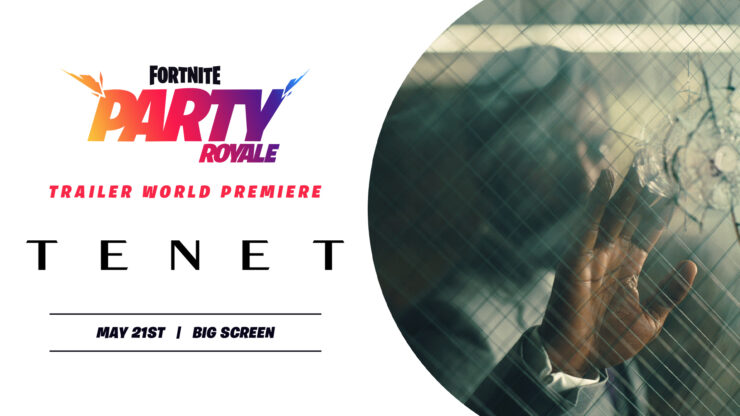 Fortnite still continues to surprise both players and the casual audience with events that seem otherwise impossible for a video game, let alone one of the biggest free-to-play battle royale titles. With movie theatres across the globe still shuttered as citizens stay home amidst the COVID-19 pandemic, the release of blockbuster titles like Tenet seem all but unsure. Even still, the marketing engines that power cinema and gaming are still rolling while stay-at-home orders are in effect and more creative types are looking for new and unique ways to get trailers and previews out to a greater audience.

And what greater audience than Fortnite, the free-to-play multiplayer title from Epic Games? Even as we speak, according to PlayerCounter, there are no fewer than 6.6 million players actively playing Fortnite at this very moment. That number might be a little higher than usual because of the latest in-game event that took place in Fortnite Party Royale. While on a smaller scale than the concerts put on in previous weeks, today's Fortnite Party Royale event was a premiere of the latest trailer for Christopher Nolan's upcoming film, Tenet. If the thought of attending a party and seeing dozens of players in costume jump around the stage doesn't interest you, Warner Bros. Pictures unveiled the new trailer for Tenet in glorious Full HD.

A secondary announcement that came hot off the heels of the trailer debut was the announcement that Fortnite Party Royale will be seeing a screening of one of Christopher Nolan's 'iconic' films. While naturally this won't be Tenet, there are still a handful of Nolan flicks that could easily be considered iconic. The Prestige and Interstellar would certainly be interesting to see implemented in Fortnite's first film screening, I personally believe we'll see the likes of Batman Begins or The Dark Knight have the honor of an in-game screening. After all, what better way to announce a brand new Batman/DC collaboration than with one of the most iconic superhero films of all time?

Tenet is still tentatively slated for a July 17th theatrical release in the United States, although the Tenet trailer left us with where to catch the film (coming to theaters) but not necessarily the when.