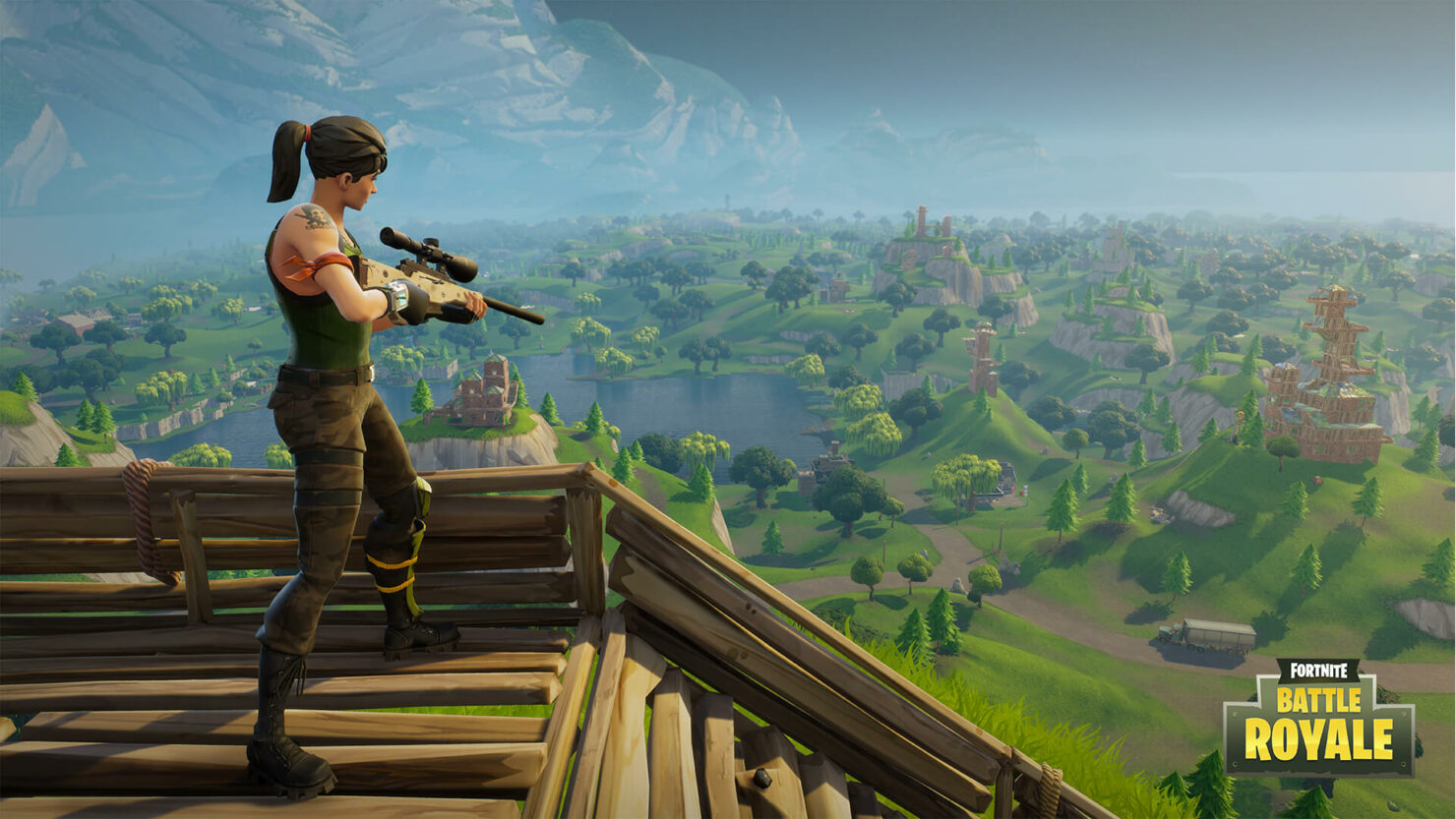 Over the course of this week, the magnitude of Fortnite's success has become more clear as YouTube shared the game's record numbers. Epic's game now holds the global record for the most videos uploaded in a single month (February 2018), the second spot when it comes to watchtime related to a videogame (again, as of February), and set the record for the single biggest gaming stream with Spanish YouTuber ElRubiusOMG reaching over 1.1 million concurrent viewers. Furthermore, last weekend over a hundred creators joined a massive Battle Royale battle and all broadcast their play, resulting in over 42 million views combined.

How big is @FortniteGame on YouTube? Fortnite holds the record for the most videos related to a video game uploaded in a single month EVER. Yesterday, the Battle Royale tournament had over 42M live views, and set a record for biggest single live gaming stream @ 1.1M concurrent.

However, there's more. Influencer marketing platform Matchmade analyzed over 2.4 million gaming related YouTube videos and its data shows that Fortnite (when combining Save the World and Battle Royale modes) has now beaten even Minecraft to become the biggest game in terms of YouTube viewership. 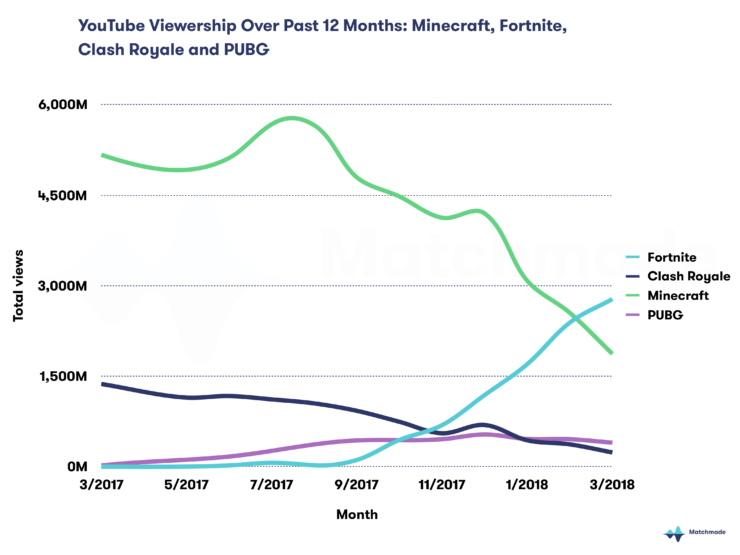 Minecraft has been the dominant game on YouTube for a long time, but its views have been declining steadily since August 2017.

In the graph above, you can see how Fortnite soared over its Battle Royale competitors Clash Royale and PUBG in November last year when it reached 1 billion cumulative views on YouTube. In fact, the average month-to-month growth rate in the past six months has been measured at a mindblowing +97% (+151% from January to February 2018). Meanwhile, Clash Royale and PUBG are largely stagnant at this point. 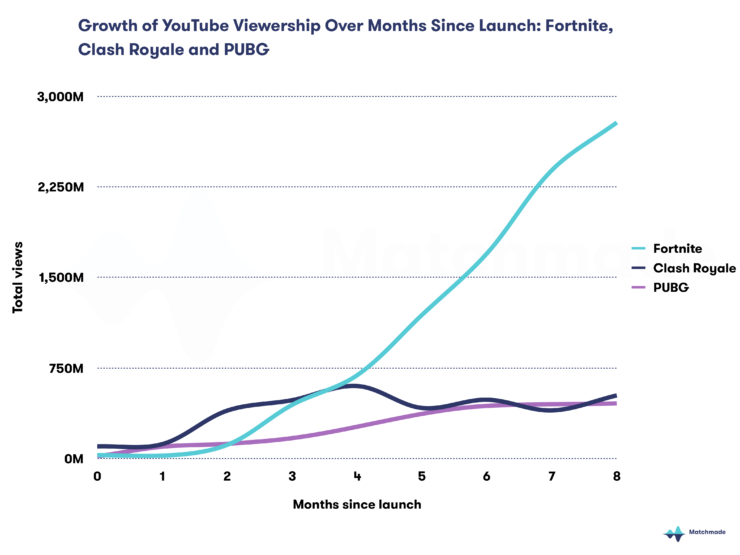 Of course, none of this would matter much if somehow viewership didn't translate into paying customers. But that's not really the case here.

According to SuperData's newly posted February 2018 digital games report, Fortnite Battle Royale ranked third on consoles and sixth on PC. It was the main driver behind the massive 359% Year-over-Year growth of the Free-to-Play console segment, it earned more "additional content revenue" than any other game except Call of Duty WWII and now boasts a higher MAU (Monthly Active Users) than Grand Theft Auto V. Furthermore, Fortnite doesn't appear yet in the mobile charts but it's a fair bet that it will do so soon after the game raked in over $1 million of in-app purchases three days after the launch of its iOS invite-only event. 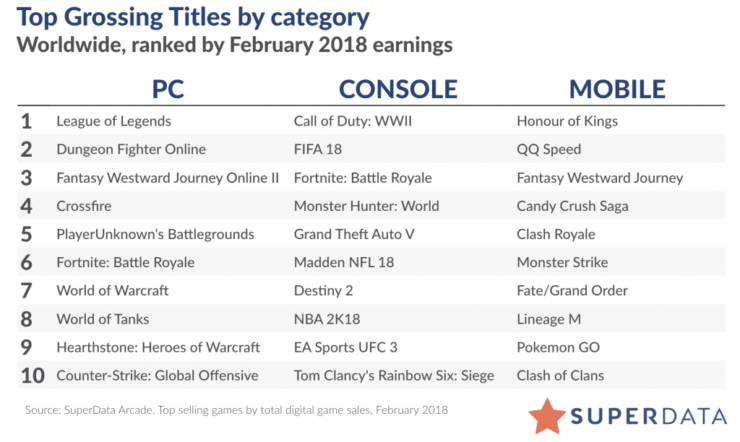 This is perhaps the biggest comeback of all time in gaming when you consider that many thought Fortnite could be scrapped altogether up to a year ago or so, after a lengthy and silent development time. When it launched with the Save the World mode it didn't make too much of a splash, either, but Epic's ability to quickly follow up on PUBG's success with a Battle Royale mode and to constantly update the game to provide more content and optimization were key factors in this spectacular rebirth.

It's impossible to say whether Fortnite can keep up this unprecedented level of success, and for how long. Not even Epic could do that, particularly with big publishers like Activision rumored to be preparing their own triple-A takes on the Battle Royale genre. However, one thing is for sure: Epic has secured its future for a long time with this hit.