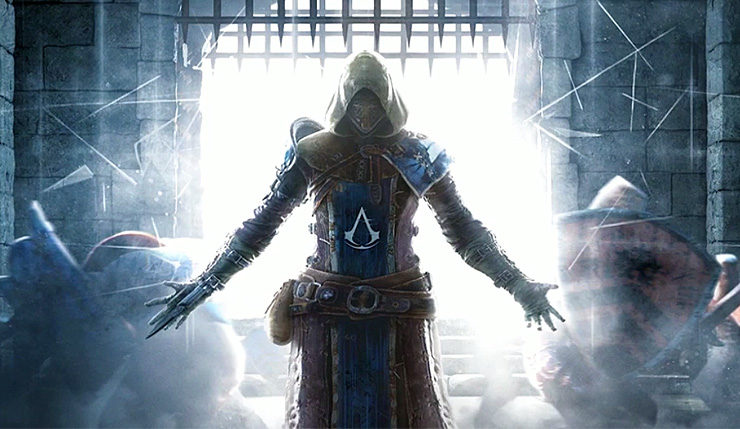 How did it take this long for Ubisoft to get around to doing a For Honor/Assassin’s Creed crossover? Considering both series focus squarely on historical badasses stabbing each other to death, it’s pretty much a no-brainer. Well, For Honor’s new For the Creed seasonal event finally makes the crossover a reality – players will be able to play a special version of Dominion, which pits a team led by Ezio Auditore da Firenze against the Templars’ Cesare Borgia. Menus and certain maps will also be getting an Assassin’s Creed makeover, and players can earn a variety of AC-themed weapons and cosmetic goodies. You can check out a For the Creed trailer, below.

Here’s a few more For the Creed details:

Those morally ambiguous folks at Abstergo have been toiling away to create a new gaming experience out of reliving the genetic memories of battle-hardened Knights, Vikings, Samurai, and Wu Lin Heroes, and the result of their work is For The Creed. players will have access to a special version of Dominion, which pits Assassins against Templars. Players will still vie for control of three zones across the map, but when your team captures the zone closest to your enemies' spawn point, you'll lure out their commanders. The commander for the Assassins is Ezio Auditore da Firenze, while the Templars are led by Cesare Borgia.

Dominion mode isn't the only thing changing in For The Creed. Each of the three maps selected for the event have received a visual refresh, featuring Animus glitches and Assassin and Templar banners and flags. Additionally, all minions will now represent a faction specific to the Assassin's Creed world. Since the events of For The Creed take place within the Animus, you'll also notice that Warren Vidic, director of the Animus Project at Abstergo Industries, has taken over as match narrator.

As with all For Honor events, For The Creed offers up a wide variety of customization items to let you rep the Assassins or Templars as you see fit. New Spartan-themed Mask Outfits based on Assassin's Creed Odyssey are available for all Heroes, while distinct weapons based on various games in the Assassin's Creed franchise are available for each Hero. You'll also be able to loot special themed emotes, executions, mood effects, and battle outfits in all game modes during the event. Lastly, no matter what customization items you equip, all drop attacks during the event will be executed as air assassinations. 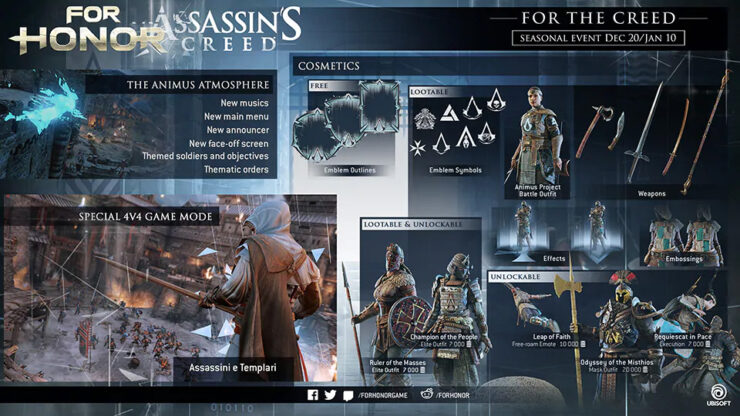 For Honor isn’t the only Ubisoft game doing the crossover thing lately – Ghost Recon Wildlands has crossed over with Splinter Cell, Rainbow Six Siege, and Future Soldier this year. Hopefully we see more of this kind of stuff from Ubisoft, as these crossovers are a fun way to bring fans of different franchises together.

For Honor is available on PC, Xbox One, and PS4. For the Creed kicks off today, and continues until January 10. Ubisoft also recently outlined For Honor’s third year of new content – you can get all the details here.

Ubisoft Still Promising 5 AAA Games by April 2021, But COVID-19 May Delay One of Them