Steam Hardware has been one of the commonly used indicators of actual GPU market share and it looks like we have another data point to add to the usual commentary and a rather interesting one at that because it apparently contradicts Steam Hardware reports. The Firefox Hardware Survey basically uses telemetry supplied by the browser to gauge the hardware that the audience is using.

This approach (using a commonly used browser as opposed to a gaming platform) technically represents a bigger sample of the population considering not everyone uses steam (or is using one at the time the survey is created) and that the survey prompt seems to behave fairly eccentrically. Possible concerns regarding this method include the fact that Chrome has a significant market share and could tell a different story. This particular caveat however, isn't that particularly big in my opinion since most of the people I know tend to have both Firefox and Chrome installed on their PCs and even if we are looking at Chrome only traffic, the bigger the sample, the more the statistical weight-age. 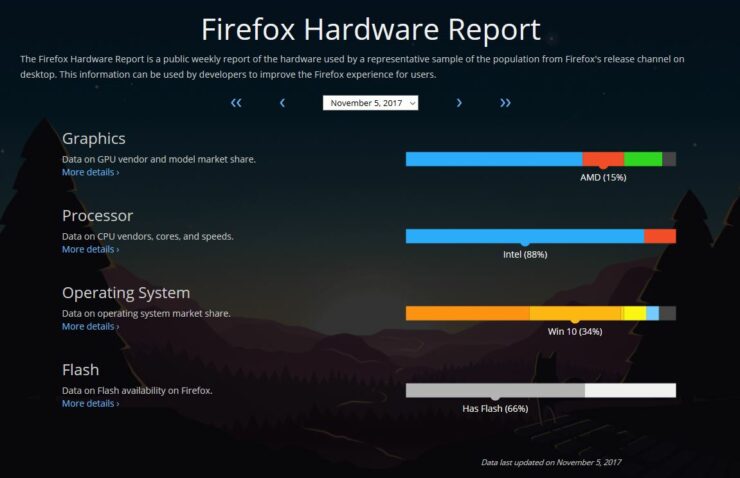 The GPU market share as reported by Firefox are as follows:

To put this into contrast, the latest October 2017 Steam hardware survey reports the following metrics:

This represents a seeming contradiction in terms but one that could probably be partially explained by the survey methodologies (its sort of like comparing apples to oranges) and the target sample. The Firefox Hardware Survey can reach all machines - including netbooks, laptops and windows tablets. Basically, it can reach the portion of the population that does not have steam installed (or did not have steam open at the time of the survey). This also represents machines that are not designed to be gamed-on in any way whatsoever, including work devices (everything needs a GPU!)

Heres the really interesting thing however. While the Steam Hardware report has never correlated well with the JPR Market Share report released on a quarterly basis, this does and very well at that. In fact, it correlates so well with the previously reported numbers that I would give this a much higher accuracy score than the Steam Hardware survey. Why you ask? Because JPR's market share report is one of the more reliable metrics out there and the Firefox Hardware Report seems to be capable of tapping much of the same results on a weekly basis.

Keep in mind however, that AMD's numbers include APUs as well as dGPUs although its not clear how strong a force the former is on these numbers. It is entirely possible that the small lead shown here is due in its entirety to APUs. That said, and in case, the situation appears to be vastly different than the one portrayed by the Steam Hardware Survey which pits NVIDIA and AMD at 81.4% and 10.84% respectively.