JPR Research's quarterly report is out and has shown expected moderate sales in the first quarter. The first quarter is usually a slow period for the GPU manufacturers due to seasonality and saw GPU shipments decrease 17.5% seasonally as compared to last quarter. Interestingly however, the yearly trend also saw a 4.5% decrease with desktop GPUs. This is something that could be construed as a slow-down of the overall market. 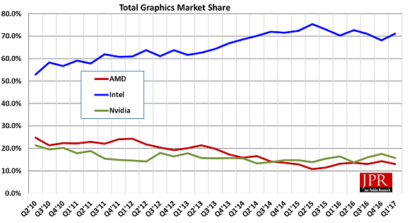 The 4.5% yearly decline of the GPU market was driven approximately 13% by dedicated graphics cards and offset by a 2% increase in notebook GPUs. As far as the dedicated graphics industry goes, the yearly decrease of 17.5% was driven by around 24.81% from AMD, 25.64% from NVIDIA and around 13.91% from Intel. All in all, Intel's iGPUs fared much better than the rest, clocking in the lowest decline that was driven by seasonality. This is actually a very good proxy for PC sales as well and shows that people were actively upgrading their PCs/laptops this quarter.

It might appear that AMD fared better than its counterpart in terms of graphics, but that is only if you count the combined effect of dGPUs and APUs. If you segregate the two, AMD's Radeon department fared worse than its green counterpart. AMD’s shipments of  APUs, for desktops decreased -22.2% from the previous quarter. AMD's APU shipments were down -18.8% in notebooks. Desktop discrete GPUs decreased -34.6% from last quarter, and notebook discrete shipments decreased -16.0%.

Needless to say, while these numbers may seem grim, they were wholly expected due to the nature of seasonality. We have seen these companies offset cyclical trends on occasion but mostly, routine prevails.