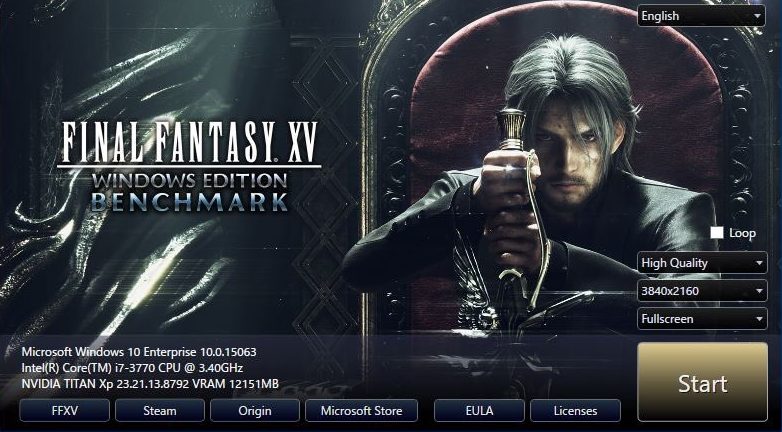 Square Enix has stated the FFXV Windows Edition Benchmark issues will be resolved, and the final game will include highly customizable settings with on/off options for various settings.

The benchmark tool the Windows Edition of Final Fantasy XV was released last week, and allowed PC gamers to get an idea of how the game looks and runs on their setup upon release. Unfortunately, the benchmark tool only included three graphical presets with no option to adjust or disable specific graphics settings. In addition, various performance issues have been reported on both AMD and NVIDIA graphics cards, and some have even stated that the benchmark tool is simply crashing on the game’s highest preset.

In a series of Tweets, Square Enix has now stated to be aware of the reported issues, including stuttering, and a Level of Detail (LOD) issue. Both are said to be fixed when the final game releases next month.

“We wanted the benchmark tool to approximate the level of visual quality and performance you can expect from your PC environment when running FINAL FANTASY XV WINDOWS EDITION”, the developer tweeted. “A Level Of Detail (LOD) issue has been discovered that affects the benchmark scores.”

“The benchmark also suffers from stuttering; both of the issues will be addressed in the shipping game.”

Square Enix clarifies that the FFVX Windows Edition benchmark only includes limited presets for simplicity’s sake, but the final version will offer highly customizable settings with on/off options. “While the settings in the benchmark are largely pre-selected for simplicity’s sake, the final game will feature highly customizable settings with On/Off options for a wide variety of settings”, the tweet reads.

“The benchmark will give you an idea of how beautiful the game will be upon release, but for the reasons stated above, the benchmark may not accurately reflect the game’s final performance.”

Final Fantasy XV Windows Edition is slated for a release next month on March 6. The game is also available for both Xbox One and PlayStation 4.