After a long awaited debut on the next generation game consoles in November of 2016, Final Fantasy XV is finally coming to PCs next month. According to the game’s director Hajime Tabata, Final Fantasy XV Windows Edition is an entire “generation ahead” of the previously released console version, with a plethora of PC-centric features and additional visual goodies added specifically for the PC version.

While the game isn’t due until next month, the game’s developer released a stand-alone benchmarking tool so gamers can test the game’s performance and see how their PCs can handle it come March 6th. And as the headline may suggest, what was uncovered is nothing short of utterly disappointing.

Now is a good time to mention that Square Enix has partnered with NVIDIA on Final Fantasy XV Windows Edition and as a result the game includes a number of GameWorks visual effects.  This isn’t necessarily a bad thing, however combined with the fact that there are only three graphics presets in the Final Fantasy XV benchmark, with no option to adjust or disable specific graphics settings within any of the presets makes this a very serious issue.

The three presets are “Lite”, “Middle” and “High”. There are six different NVIDIA GameWorks effects in Final Fantasy XV. Four of which are automatically enabled at the High preset and cannot be individually toggled on or off from inside or outside the game.

The above data was pulled from memory by redditor randomstranger454 who has discovered that the developers have bizarrely chosen to obfuscate these settings behind a BASE64 format, rather than a simple txt file that can be edited.

None of the six effects are enabled at the “Middle” preset and this has some pretty dramatic implications on performance as you will soon find out. The four GameWorks features that are enabled at the High preset are NvidiaFlow, NvidiaHarWorks, NvidiaTerrainTesselation and NvidiaTurf. These four settings are specific to fire, hair, tessellation and grass respectively. Two of the six settings remain disabled in the benchmark even at the highest graphics preset, likely to be enabled at a later date.

What This Means For Your Performance

At the high preset the game is very demanding, requiring no less than a GTX 1070 for a 60 FPS average. Dropping the preset down from High to Middle sees a dramatic improvement in performance. Here, the RX 580 delivers nearly double the framerate and is now capable of pushing a 59 FPS average. 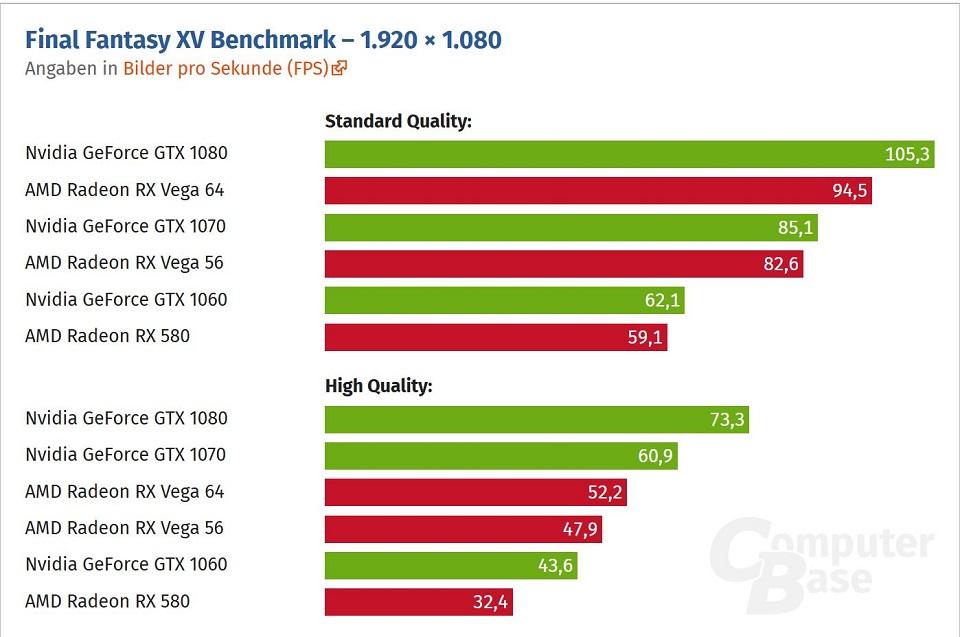 This is obviously a very significant performance issue, but not an entirely unexpected one. GameWorks visual effects have always been extremely taxing on the hardware and disproportionately so on AMD graphics cards. We explained why this is in a 4000 word investigative report we had published nearly three years ago, and quite sadly the facts uncovered then about NVIDIA's GameWorks program still hold true today.

But Wait, It Gets Worse! - GameWorks Renders FFXV A Stuttering Mess Even On NVIDIA's GTX 1080 Ti

Unfortunately, while the impact GameWorks has on FPS is more pronounced on AMD, another more serious performance issue that multiple hardware reviewers have run into affects both NVIDIA and AMD graphics cards. Namely persistent visual hitching and stuttering that’s introduced at the High preset that affects even the GTX 1080 Ti.

Both HardwareUnboxed and GamersNexus confirm running into the same stuttering issue. 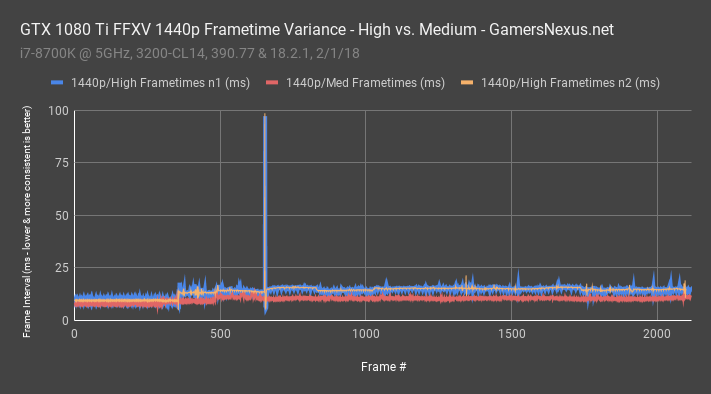 “Frametime variance is far greater with High settings, and frame-to-frame intervals become looser and more stuttered. This causes visible “hitching,” so to speak, and exists even on 1080 Tis. It’s particularly bad during the first run of a benchmark, but is ever-present with the High settings.”

And the issues don’t seem to stop there, some users have even reported that the benchmark would simply crash at the high preset. This really brings us to the core of the issue here. Adding GameWorks visual effects as an option that gamers can willingly chose to enable or disable is one thing, but to have it be part of a preset, essentially forcing it down everyone’s throat, at the detriment of performance and stability is simply unacceptable.

A cynic might even shout foul play here, seeing how making the proprietary NVIDIA GameWorks effects be part of the game's graphics preset, rather than an option that can be turned on or off, would heavily skew performance figures in favor of NVIDIA in any future graphics card review that includes Final Fantasy XV. And no doubt reviewers will want to include such a high profile title in their future GPU review test suites. It's certainly not the first time we've seen this happen.

At its current state the kindest thing we could say about the high preset and the GameWorks features is that they’re unfinished. If the huge performance penalty doesn’t render your game unplayable, the frustrating stuttering and crashing will border on making it so. Simply put, this is not what we've waited more than a year for. We sincerely hope that come March 6th developers will have at least opened up the options to be individually toggled on and off.