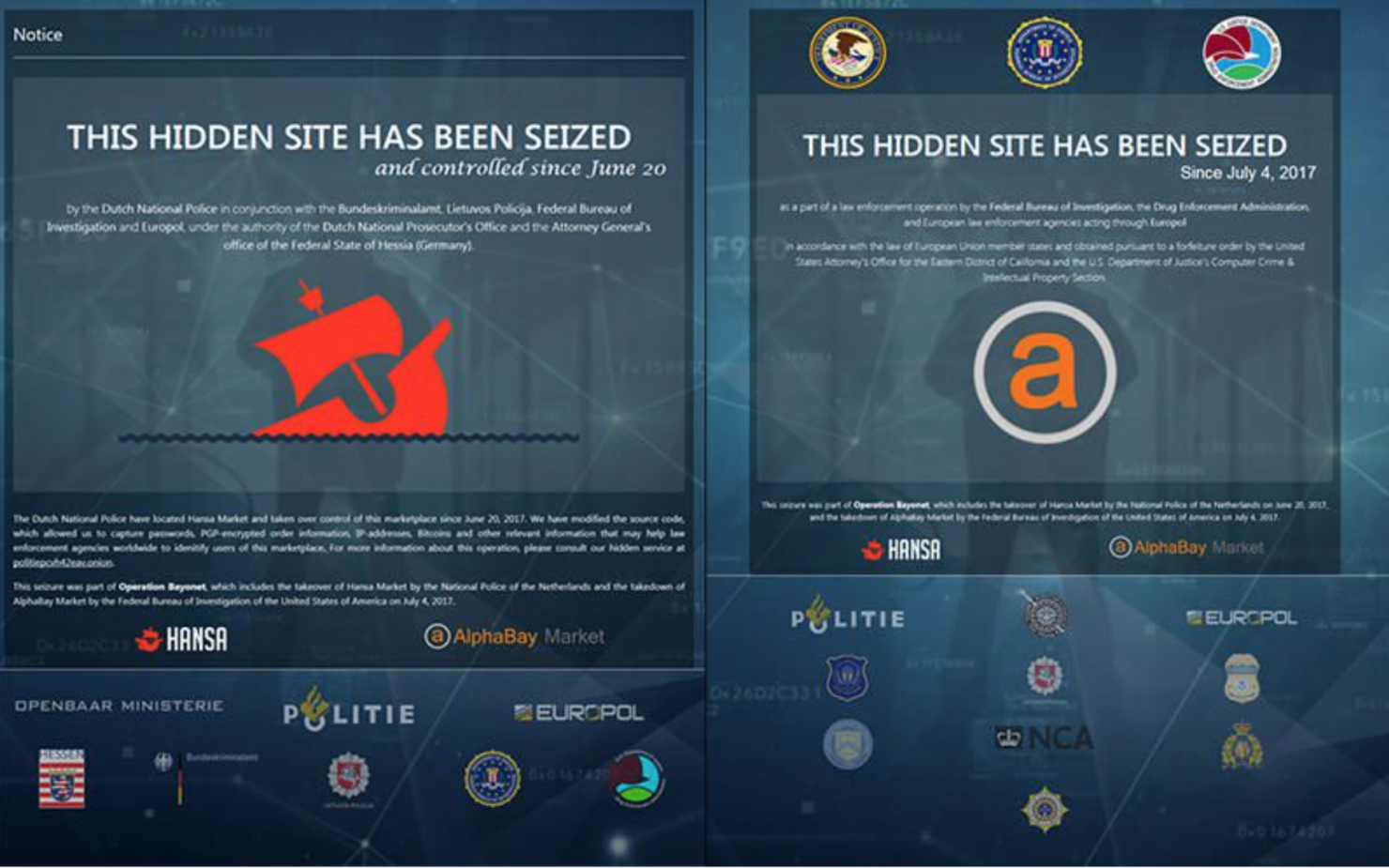 In probably the biggest dark web bust, the US & European agencies have taken down AlphaBay and Hansa (Image: Europol)

The US Department of Justice and Europol have closed two of the three largest dark web markets, AlphaBay and Hansa. The two dark web marketplaces served hundreds of thousands of customers who were looking to buy or sell illegal goods online.

"This is likely one of the most important criminal investigations of the year – taking down the largest dark net marketplace in history,” said Attorney General Jeff Sessions.

The US and European police announced earlier today that AlphaBay and Hansa, the two massive dark net marketplaces, are closed for business. "Around the time of the takedown of the site, there were more than 250,000 listings for illegal drugs and toxic chemicals on AlphaBay," Jeff Sessions, US Attorney General, said about the AlphaBay network.

AlphaBay had 200,000 members and 40,000 vendors who posted over 100,000 listings for stolen identification documents, access devices, and hacking tools, along with 250,000 listings for illegal drugs. In comparison, Silk Road - one of the most popular dark web markets - had only 14,000 listings when it was shut down by the FBI.

Cryptocurrency was, of course, the currency of choice ruling the marketplace. Alexandre Cazes, 26, who ran the site was arrested earlier this month in Thailand and was found dead in his cell last week, taking his own life.

Law enforcement leaders called security practices of Cazes sloppy, which led to his arrest. He not only used his own Hotmail email address linked to his PayPal account that was then linked to his Canadian bank account but also had his laptop unlocked and unencrypted when his home was raided by the Thai police.

Dutch police covertly ran Hansa to get to its users' identities

While the feds took down AlphaBay, the Dutch police ran Hansa dark web market for a month from 20th June to monitor activities of buyers and vendors. During this time, they shut down AlphaBay to push its users to Hansa, who happily flocked to the second biggest dark net marketplace. In this duration, Hansa saw an eightfold increase in traffic helping the police to collect information of thousands of users in an undercover operation.

"We could identify and disrupt the regular criminal activity that was happening on Hansa market but also sweep up all of those new users that were displaced from AlphaBay and looking for a new trading platform for their ciminal activities."

The US DoJ touted the takedown as a massive success for international law enforcement agencies and a sign of global cooperation. "These two cases have been developed together and our joint hit on both of these dark markets is one of the most sophisticated law enforcement operations against cybercrime," Robert Mark Wainwright, head of Europol, added.

"They coordinated a takedown and have punched a big hole in the operating ability of drug traffickers and other serious criminals around the world," Wainwright added.

However, officials did add that while these takedowns are a massive win for the law enforcement community, there will be more dark net websites engaging in similar activities. Similar to how AlphaBay became 10 times larger than Silk Road, intelligence community predicts they are in for even bigger challenges.