It looks like a huge amount of dislikes on the Diablo Immortal reveal videos on YouTube somehow got lost.

Moreover, the following top comment on the Cinematic Trailer has been deleted over and over again. However, countless users have now reposted it to express their disappointment.

Certainly, this isn't a good look for Blizzard. Meanwhile, Executive Producer and Co-Founder Allen Adham told Kotaku that the company didn't expect this level of backlash while teasing that there are other unannounced Diablo projects in the works.

That being said, we knew our audience here desperately wants to see and hear about one thing in particular. At Blizzard, we don’t announce things until we’re ready. It’s all about game quality, less about timing, all about delivering an overwhelming experience to our players. We tried to get ahead of that a little bit with the blog post to let that group know that we are working on multiple things and continue to work on multiple things. But it’s pretty clear that their incredible passion for Diablo manifests in interesting ways.

There are actually two distinct teams. That’s something we tried to communicate. I know our community here, there’s a concern that we are focused on this instead of that. The truth is that we have multiple Diablo teams working on multiple unannounced Diablo projects even after announcing Immortal.

Diablo Immortal was meant to be the biggest announcement made at BlizzCon 2018 last night. However, it disappointed many fans who hoped to see a new main franchise entry on PC and consoles instead of a mobile game. During the Q&A session, one fan took the microphone to ask if it was an April Fools' joke and later another wanted to know if the game would be released on PC at some point.

Overall Diablo Immortal has not been well received, to say the least, even on YouTube where the official gameplay trailer is currently sitting at 93K dislikes and only 4.2K likes. The reception got even worse, though, when fans on Reddit noted that previous NetEase games Crusaders of Light and Endless Of God look a lot like Immortal. The latter game in particular uses a very similar User Interface.

This perhaps shouldn't be that surprising as Diablo Immortal is being co-developed by NetEase, the Chinese studio responsible for many popular mobile games. As you may recall, they were sued earlier this year by PUBG Corporation because two of their mobile games, Rules of Survival and Knives Out, resembled PLAYERUNKNOWN'S BATTLEGROUNDS too much. NetEase has since filed a legal response, anyway, asserting that PUBG Corporation cannot try to monopolize the Battle Royale genre.

How do you feel so far about Diablo Immortal? Let us know by leaving a comment. Below we've added the official features detailed by Blizzard on the game's official website. Pre-registration is already available on Android and will soon be on iOS devices, by the way.

From the peaceful town of Wortham to the jungle island of Bilefen and the ancient Library of Zoltun Kulle, each zone in Diablo Immortal has new challenges to master and familiar faces to see. Will you choose to help Valla and her teacher in the Shassar Sea, or delve the tomb of Fahir, an ancient disciple of Akarat? Or storm the Countess’ Forgotten Tower and stop her dark reign once more? The possibilities are many. The choices are yours. 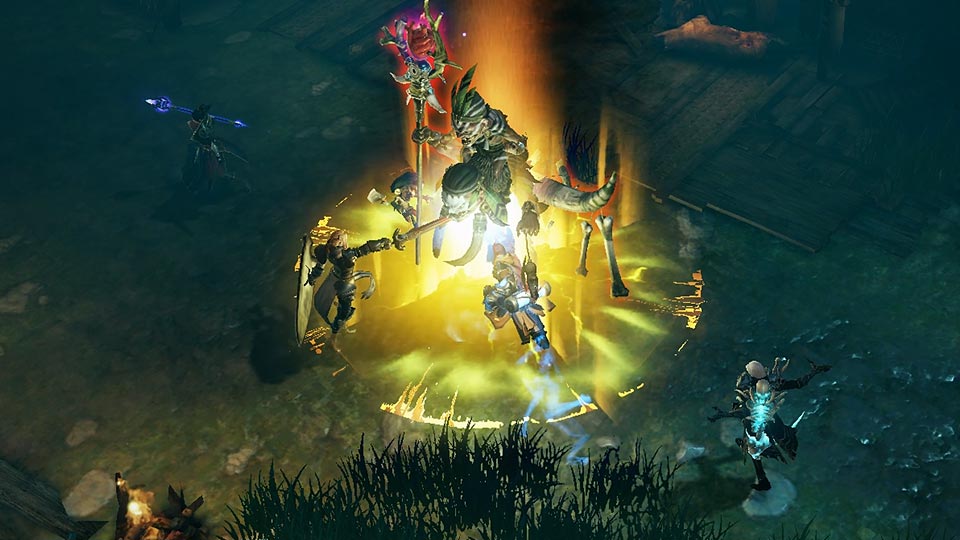 Massively Multiplayer Action in Your Pocket

Meet other demon-slayers as you wander Sanctuary, and join them to take on deep, treacherous dungeons. Visit vast social hubs like Westmarch and conduct business with local merchants before setting off on your next adventure. Drop in or out of groups easily and engage in dynamic events all over the world, teaming up with other heroes as you take down Skarn’s minions—and reap powerful rewards.

Explore the sprawling streets of Westmarch in a time before Malthael’s corruption. The city is always bustling with activity as visitors from all over the world come to marvel at its sights, enjoy its landmarks, and more. Westmarch is where you can meet all your adventuring needs. You’ll have access to your stash and vendors, but more importantly, it’s the place to meet fellow travelers, relax and take a breather.

Diablo Immortal is being designed from the ground up to give you an authentic Diablo experience on touch-screen devices. Intuitive actions, gestures and touch controls put you in full command of your hero. Slay endless hordes of demons as effortlessly as you would with a controller or keyboard and mouse.

Zero in on Your Enemies

Directional controls make it easy to move around in the world; demolishing the denizens of hell is as easy as holding down your thumb on a skill from your hotbar to aim it, then releasing it to unleash hell. Quickly access potions for a gradual health refresh, and equip recently looted items with a single tap on your screen. 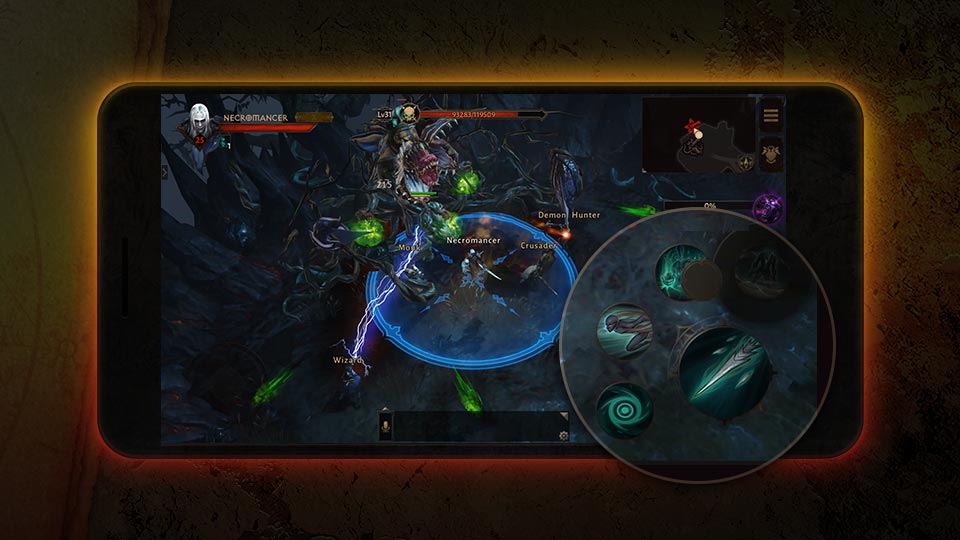 Barbarian
A savage wanderer and mighty weapons expert. Survivors of the disaster that struck Mount Arreat, Barbarians use powerful weapons and brutal attacks to crush any opposition.

Monk
A swift, sacred warrior and a master of martial arts. Monks embody the will of their land, Ivgorod, and their one thousand and one gods. Lightning-fast strikes and peerless mobility are the Monk’s specialty, and they pummel their enemies with a dizzying array of blows.

Wizard
A rebellious academic and living conduit of arcane power. Wizards manipulate arcane forces to strike from a distance, disintegrating their enemies to oblivion, freezing them until their bodies shatter, or burning them into charred remains.

Crusader
A towering colossus and wrathful zealot. Faith is a Crusader’s weapon. Striking with cruel flails and clad in impenetrable armor, Crusaders wander the land, vanquishing evil wherever they go and dominating the battlefield through sheer purpose

Demon Hunter
A vengeful stalker and crossbow-wielding adept. Relentless vigilantes that assault from afar, Demon Hunters are trained slayers with a tragic past—their families destroyed by the denizens of the Burning Hells. Tempering the discipline of their training with their hatred for the Burning Hells, Demon Hunters strike undeterred until their prey is at their mercy.

Necromancer
A commander of the dead and manipulator of life and death. The priests of Rathma seek to bring balance to the world. They use their powers over life and death to keep Sanctuary free of both demonic and heavenly influences.