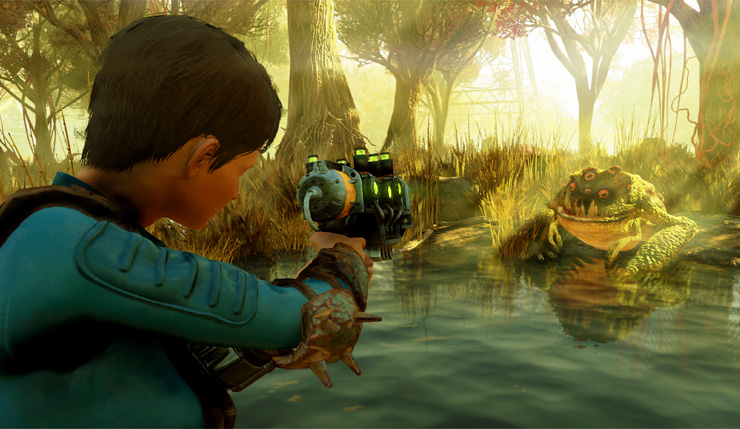 The Fallout 76 beta kicks off on Xbox One today, but what if you haven’t pre-ordered and can’t get in on the action? Well, you can still get a little taste of Bethesda’s latest via 19 new 4K screenshots. You can check out the splendor of post-apocalyptic West Virginia below (click for full-size images).

In other Fallout 76 news, Bethesda has detailed how the game's PvP combat works. Basically, you can attack other human players all you want, but you’ll do a negligible amount of damage, unless your target returns fire. If they do, a PvP duel is instigated, and it’s on like irradiated Donkey Kong. Here’s a more in-depth description of how it all works:

Outside the Vault, you and your fellow dwellers are free to hit, chop, smash, shoot or otherwise attack each other once you’ve reached level five. However, all damage you deal to another player will be greatly reduced until they agree to start a PvP duel with you by returning fire. It’s also worth noting that an attack must hit another player directly to be considered an invitation or agreement to duel. For example, tossing a grenade at a stranger will not flag you as an attacker, and the explosion will deal no damage to them.

Once a player strikes back, you become hostile toward each other, and any attacks from that point on will deal full damage. What’s more, you’ll be hidden from one another on the map and show up as red dots on each other’s compasses. A notification will immediately appear at the bottom of the screen showing who your attacker is, as well as the Cap reward¬ you’ll receive if you manage to kill them. This reward will generally be equal to the player’s current level, and it’s paid from their personal stockpile of Caps.

If you’re killed during a PvP duel, you can choose to either “seek revenge,” which will spawn you near the person who murdered you, or just respawn regularly at a location of your choice, which ends the conflict. Fallout 76 will also have a more organized Hunter/Hunted mode, which is basically a battle royale with a lot less players. Here’s the full description:

You can tune your RobCo brand Pip-Boy to Hunter/Hunted Radio to join a pre-war training session designed for clandestine government operatives, in which you’ll attempt to hunt down a survivor while eluding another for fun and prizes! Once at least four players have joined the Hunter/Hunted Radio queue, participants will each be assigned another specific Hunter to track and assassinate. You are then free to seek and destroy your prey in a large area, with a one-hour time limit. Don’t get too cocky, however, because your own assassin may be hiding around the next bend, and your target may decide fight back.

Over time, the Hunt area’s size will decrease, forcing you closer to your current victim and assassin. Upon killing your target, you’ll be assigned to the player they were tracking, and so on, until just one Hunter remains. Win or lose, taking down at least one other Hunter will award you with some Caps and XP. These rewards will also increase based on the number of kills you achieve, up to a maximum of six kills.

Sounds like Fallout 76’s PvP options have been fairly well thought out, although I feel like the game is going to be limited by the relatively low number of players it supports. Will running into other players even be that common? Will a four-player battle royale be fun?