Following the release of Fallout 4 in all regions, players have tried to add more features to the game through mods. Plenty of very interesting mods have been released for the game developed by Bethesda in the past few months, and today yet another one has been made available, a mod that will make those who have a complicated relationship with perks quite happy. 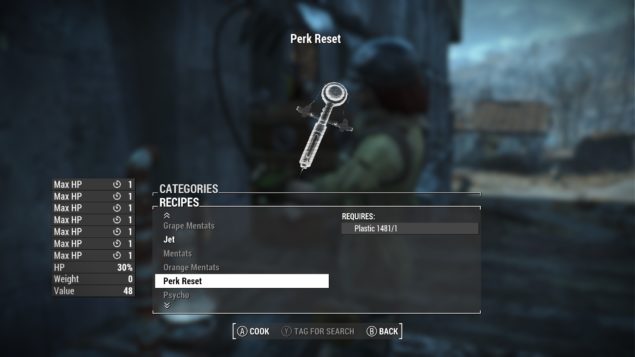 The new Fallout 4 mod is called Perk Reset Chem. The mod adds a Perk Reset Chem in the chemistry crafting station under drugs, allowing players to reset all perks including SPECIAL, refunding all points.

Adds a 'Perk Reset' Chem in the chemistry crafting station under drugs. The chem will reset all perks including SPECIAL and refund all perk points as well as SPECIAL and Bobblehead SPECIAL stats as perk points. If you are over 10 SPECIAL base this will put your cap back to 10 but still refund any bobblehead SPECIALS that have been picked up.

Give it 5 seconds to complete after taking it, I added a lot of wait functions because there are a LOT of perks.

You can learn more about the Fallout 4 Perk Reset Chem and download it by going here.

Before the end of the week, the Fallout 4 1.4 update will be released on PlayStation 4 and Xbox One. The update has been made available last week for the PC version of the game, adding official support for add-ons and more.

Not counting the already revealed DLC packs, Fallout 4 is going to receive more free content in the future. A while back, Bethesda has confirmed that an overhauled Survival Mode will be made available for the game in the future. A full overview of the new Survival Mode has surfaced online a couple of weeks back thanks to the game's files, revealing some of the interesting features of the new mode.

Fallout 4 is now available in all regions on PC, PlayStation 4 and Xbox One. We'll let you know when the 1.4 patch is available on consoles as soon as possible, so stay tuned for all the latest news.